When the People’s Liberation Army (PLA) fired the symbolic first shots at its first overseas miliary base, in Djibouti on the Horn of Africa, just over two months ago, it was a wake-up call to the world that China’s growing overseas interests will be escorted by a powerful military.

Military insiders told the South China Morning Post that Djibouti would not be China’s sole overseas military base, with Beijing planning to explore the possibility of more foreign military outposts in Africa, the Middle East and other areas to protect its expanding overseas interests in the Indian Ocean region.

“China needs more overseas military bases because the country’s expanding interests have also been challenged by some countries and local armed forces,” one military insider, who requested anonymity, said.

“Djibouti is an ideal training place to the test the PLA combat forces’ capacity to handle a range of weapons and tasks in extreme heat, humidity and salinity in the African continent, where temperatures routinely rise above 40 degrees Celsius.”

PLA troops had conducted at least two live-fire drills in the desert in Djibouti since September 22 that would help them “explore a new training model for Chinese overseas garrisons”, base commander Liang Yang told the PLA Daily last month. 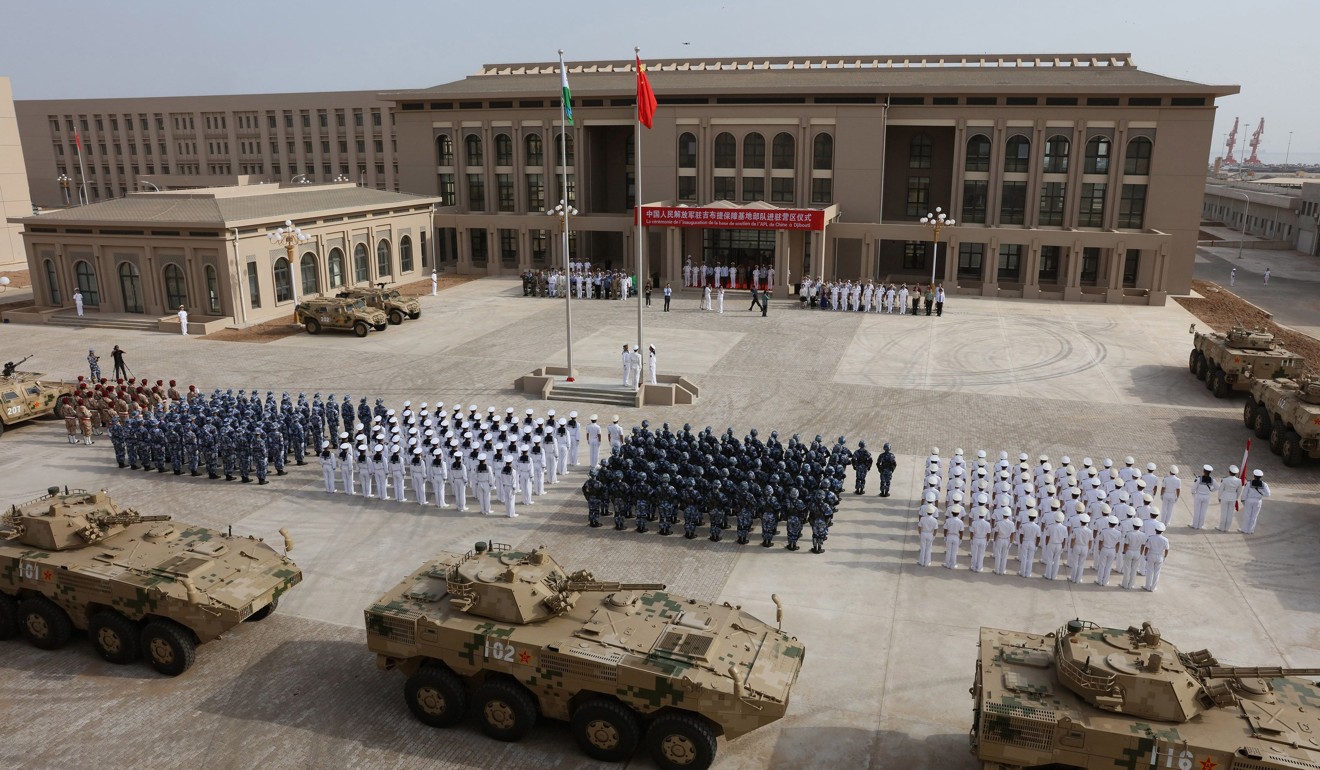 In exercises late last month the garrison in Djibouti showed off its advanced Type 095 and Type 90-II wheeled armoured fighting vehicles and other heavy weaponry. Macau-based military expert Antony Wong Dong described them as “the most advanced main battle armoured cars” in Africa.

The materiel and troops were deployed to Djibouti in July by a flotilla comprising the 25,000-tonne Type 071 amphibious transport dock Jinggangshan and the semi-submersible Donghaidao, with a displacement of more than 20,000 tonnes, which was designed to carry equipment and small vessels.

The exercises could be seen as the first time PLA troops not under UN command have opened fire outside China in nearly four decades, dating back to the country’s border conflict with Vietnam in 1979.

From rail and airports to its first overseas naval base, China zeroes in on tiny Djibouti

“The live-fire drills in Djibouti would definitely strengthen the PLA forces’ quick response to challenges from rival countries and armed forces that might harm China’s growing national interests in Africa and the Middle East,” Beijing-based naval expert Li Jie told the Post.

Military insiders told the Post earlier this year that China planned to quintuple the size of its marine corps to 100,000 personnel, with some of the new marines likely being deployed to Djibouti.

Mainland media estimate the Djibouti base, located at a strategic choke point at the entrance to the Red Sea, near the important maritime artery that is the Suez Canal, could house up to 10,000 troops. It is not clear how many are there now.

The lease for the base runs for a decade, with China paying US$20 million a year.

Beijing has always insisted on describing its first base on the African continent as a “logistic supply station” that would benefit UN peacekeeping missions, counter-piracy operations in the Gulf of Aden and off Somalia’s east coast, and humanitarian relief efforts. 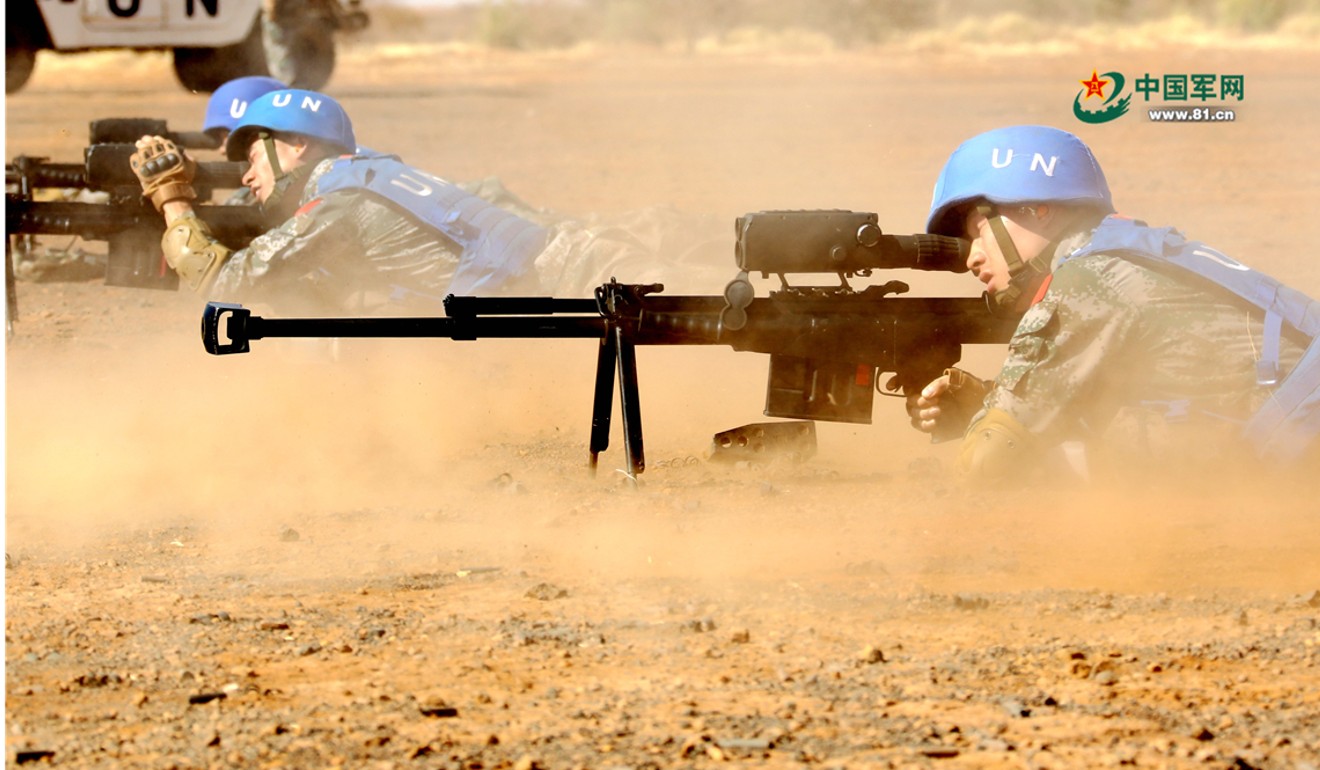 Military experts said peacekeeping, anti-piracy, disaster relief and humanitarian aid missions were defined by the PLA as part of its military operations other than war (MOOTW) and it had been using them to expand its overseas influence, with peacekeeping operations being a window to show its growing military might and soft power.

On November 30, Chinese peacekeepers serving with the UN in war-torn Mali also conducted a live-fire drill after 15 people were killed and 31 injured in 15 terrorist attacks that month, the PLA Daily reported. It said four African peacekeepers had been killed in two terrorist raids on UN peacekeepers’ barracks.

The “Golden Dune” drill was staged by the fifth detachment of Chinese combat troops sent to Mali as peacekeepers. Photos in the PLA Daily showed they were armed with the PLA’s new Type 95-1 assault rifles.

China has established an 8,000-troop UN peacekeeping standby force, the world’s biggest MOOTW force, in line with a pledge made by President Xi Jinping in 2015. He also promised to provide US$100 million in military assistance to African Union peacekeeping missions and to commit US$1 billion to a 10-year joint China-UN peace and development fund.

Senior Colonel Zhou Bo, director of the security cooperation centre at the Ministry of National Defence’s Office for International Military Cooperation, told the Post peacekeeping missions were one of the responsibilities China shouldered as a permanent member of the UN Security Council and that under UN peacekeeping mandates Chinese troops could not choose to go wherever they wanted, meaning they could not provide direct protection to Chinese enterprises operating in Africa.

But Zhou, who is directly in charge of China’s peacekeeping missions, said a bigger role in them helped boost the army’s combat capabilities.

“Nowadays, the risk of China being invaded has become slim, but peacekeeping operations help Chinese troops to learn and experience how to deal with grim challenges they might never face at home,” he said. “In order to build an outward-oriented military, [the PLA] should implement two basic tasks: one is to protect China’s growing overseas interests, and the other is to assume more international responsibilities.

“Therefore, going out to take part in [peacekeeping missions] will surely be effective training, which is completely different from the drills they have been experiencing at home.” 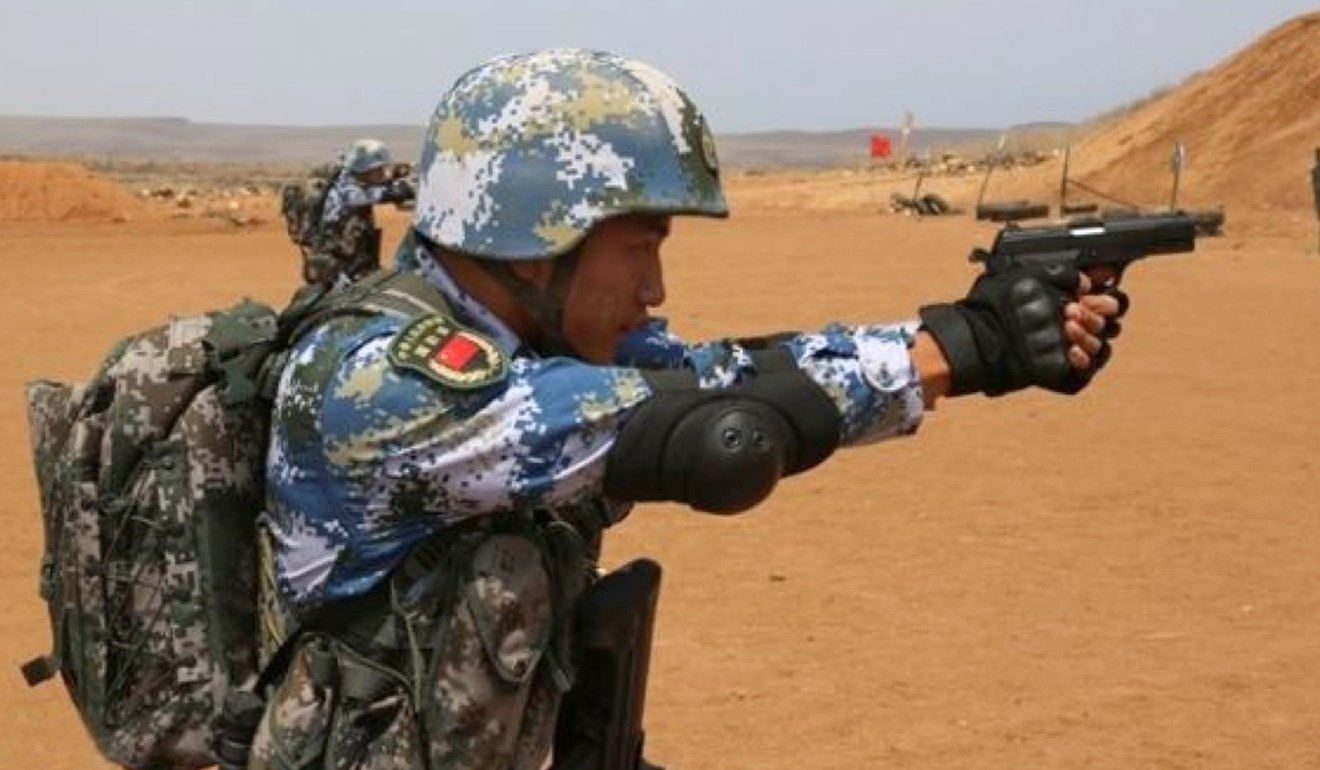 Han Xinkai, who served with Chinese peacekeepers sent to South Sudan in 2013, during a civil war in the African country, agreed with Zhou, saying the reality of peacekeeping operations was more challenging than what they had learned at home.

“We needed to deal with two key problems,” Han said. “The minor one was always to maintain precautions against child thieves and stone-throwing assaults by local civilians. The major one was to be combat-ready for any kind of battle challenges because there was a civil war going on.”

Naval expert Li Jie said peacekeeping missions were part of China’s projection of power, along with its plans to become a maritime power and President Xi Jinping encouraging Chinese companies to “go global” and boost trade through his “Belt and Road Initiative”.

“China’s bigger role in peacekeeping operations is an indication of Beijing’s ability to protect its global influence,” Li said. “Peacekeeping missions have become one of China’s brands, similar to Beijing’s role in the Belt and Road Initiative and the Asian Infrastructure Investment Bank (AIIB), showing China’s hard and soft power.”

The belt and road plan is an global geoeconomic strategy led by Beijing to improve trade and economic integration across Asia, Europe and Africa, while the AIIB is a China-led multilateral lender that aims to support the building of infrastructure in the Asia-Pacific region.

China became the second-largest contributor to the UN’s peacekeeping budget, behind the United States, last year and currently has troops involved in nine UN peacekeeping operations. Six of them are in Africa – in Mali, Liberia, South Sudan, Darfur, Democratic Republic of Congo and Western Sahara.

Zhou said China had become a regular source of so-called enabling units – the special forces, engineering, transport, communications, and aviation troops that could help make UN peacekeeping operations more professional. Among them were about 800 Chinese female peacekeepers, who tended to have an easier time working with female civilians in Muslim communities in Africa. 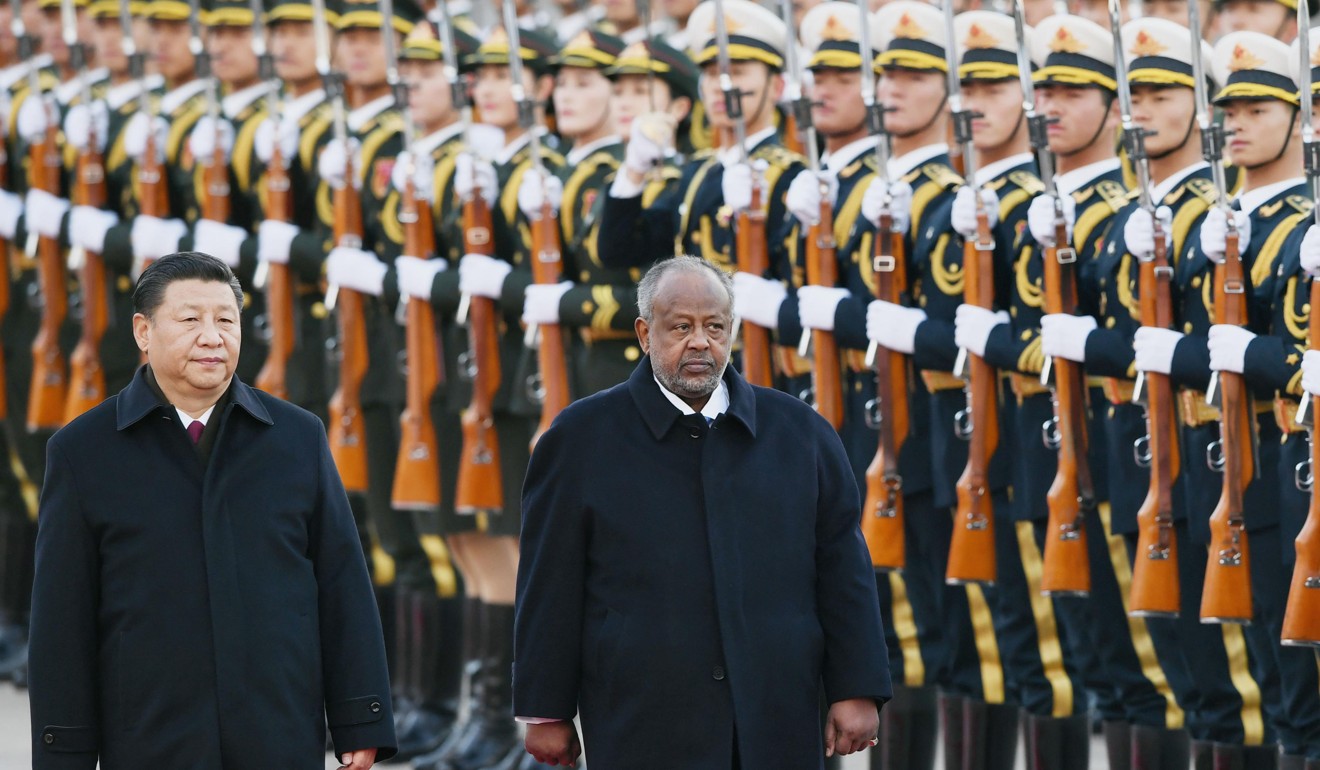 Zhou Chenming, a Beijing-based military expert, said China’s long-standing “non-intervention policy” and purely commercial goals in Africa had helped it win friends among developing countries, which were also the overseas markets it needed for exports of low-end products.

“When any country’s overseas interests expand to a certain scale, just like China’s … it should spare no efforts to protect its interests,” Zhou Chenming said. “That kind of behaviour can’t be defined as an invasion, but self-defence.

“Unlike the US, which used to promote ‘democracy and freedom’, China never criticised destination countries’ political and social systems because of its “non-interventionist” foreign policy.

“China’s aim is very simple and clear, we just want to make money.”

China’s exports to Africa last year were worth more than US$92 billion according to its Ministry of Commerce, but with imports from the continent worth only around US$60 billion if was left to explain a trade surplus of more than US$32 billion.

A McKinsey report published earlier this year estimated that more than 10,000 Chinese enterprises – 90 per cent of them privately owned – have invested in Africa.

Dr Rajeev Ranjan Chaturvedy, a research associate at the Institute of South Asian Studies at the National University of Singapore, said the world would welcome China’s increasing role in peacekeeping, but such non-traditional security missions would not help China boost its belt and road strategy.

“We should not see a correlation between peacekeeping and belt and road projects. The Belt and Road Initiative is still evolving and there are visible challenges emerging every day,” he said, citing the cancellation of several railway projects in the Middle East and Africa.