Eastend, Saskatchewan: A song of culture and karaoke

A beautiful song is being written in what outsiders may think is a boring, nothing-to-do Saskatchewan town.

What was supposed to be a one-off open mic night is now becoming a must-see monthly event that showcases the multicultural and positive spirit of Eastend, Sask.

While it may seem very small to people living in large cities — or even larger towns — it’s exactly the place Rosa Vazquez wanted to live in. Even if it was around 10,000 times smaller than her previous home.

“I’m Mexican, and had lived in Singapore for 21 years before coming here,” Vazquez said.

Singapore is home to more than five million people.

From millions of neighbours to dozens 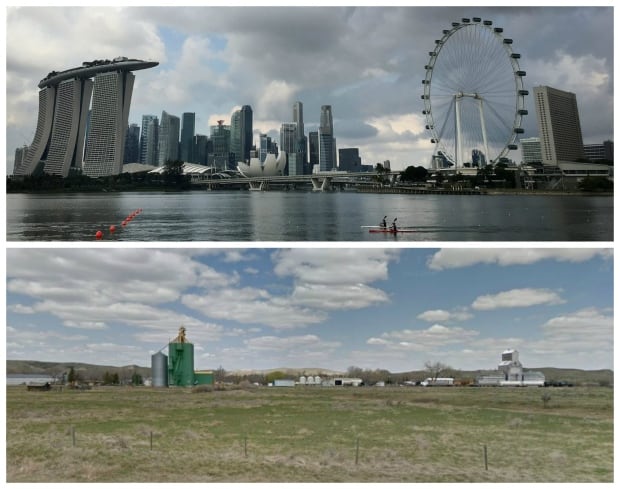 Vazquez, who is originally from Mexico, is currently Eastend’s tourism director.

Her husband, Rafe, was originally born in Saskatchewan, but spent 35 years in several countries before meeting his wife in Singapore. The two lived there together for two decades before they got tired of living with millions of people on a small island.

Vazquez started to research towns closer to her husband’s hometown, looking at places from the Manitoba border to Alberta.

During a business trip on the prairies, Rafe drove to Eastend. He sent Rosa a long, slow, boring video of the town’s streets. He also sent a beautiful sunrise. Vazquez loved what she saw.

A few months later, they packed their bags and went to Eastend to find a home.

“You can come here and enjoy rural life, see deer in your backyard, enjoy this beautiful community,” Vazquez said. “At the same time, you can be doing business with Asia, with Europe, anywhere in the world. So you have the best of both worlds.”

While her new home was indeed a rural, and much smaller one, Vazquez said it doesn’t lack diversity.

“There is quite a big community of Filipinos here and in the surrounding towns,” she said. “Within the town, they all come from different backgrounds — you know, from different European countries. So there’s a great cultural diversity in town.

“We may be a small town, but you’ll find people from all over the place.”

From downturn to gettin’ down 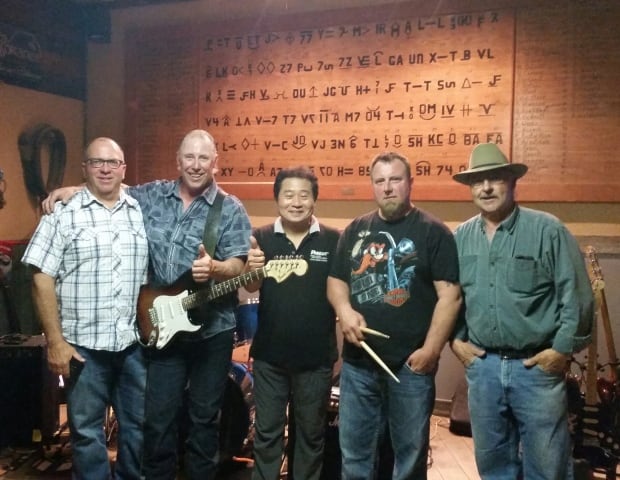 A band in Eastend, Saskatchewan called the Ranchmen stand with Noel Encarnacion (middle), who is a cook at a local restaurant. Encarnacion moved to Eastend from the Philippines. (Courtesy of Rosa Vazquez)

Often known for being the home of Saskatchewan’s favourite fossil — a 65-million-year-old Tyrannosaurus rex named Scotty — Eastend is also an important area for oil workers.

“The oil downturn really affected the hotels and the restaurants because a lot of the revenue comes from oil workers that stayed in Eastend,” Vazquez said. “So they were really hurting.”

In an effort to help local businesses, the community — including the Chamber of Commerce — decided to hold their monthly meetings at local restaurants. They decided it would be a great way to help, but they also wanted to have some fun doing it.

Vazquez said Ed Sanford, the owner of the Riverside Motel, got several musicians in the region together and decided to make it an open mic night.

The first event was such a success, they decided to do it again a month later. When the event moved to the Cypress Hotel — which is owned by Steve Ahn from Korea — it started to take on a life of its own.

The showstopper now, according to Vazquez, is the hotel’s cook — Noel Encarnacion from the Philippines.

“We all know Noel as a great cook, but suddenly in the middle of the event, he comes to the microphone and he starts singing Have You Ever Seen The Rain,” she said. “He was great. Everybody was just clapping and dancing. Then he did another couple of tunes, and suddenly he starts singing La Bamba.”

Vazquez said everyone got on their feet that night and had a party to remember. But the crowds wanted more a month later.

“Everybody was waiting for Noel to come and sing La Bamba,” she said, laughing. “We have a lot of talent here in the area. A lot of our musicians are also farmers and ranchers.”

She said other bands in the region have started to come because they heard how great of a time the monthly meeting has become.

“It is a great event to bring the community together, to help each other, and at the same time just have so much fun.”