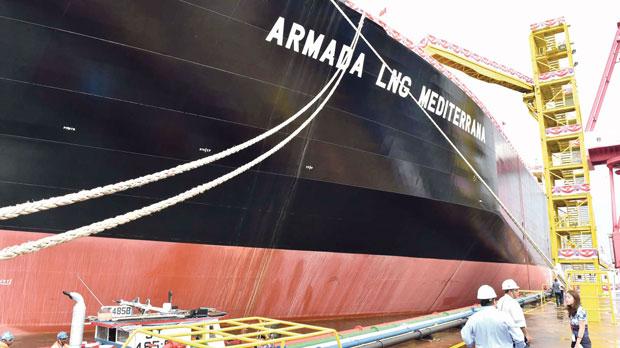 The Armada LNG Mediterrana berthed at a shipyard in Singapore. Photo: Jeremy Wonacott/DOI

Electrogas will not divulge the contents of a study analysing the risks associated with the LNG tanker that will be berthed permanently next to the Delimara power station.

The study, prepared by the maritime research institute of the Netherlands as part of the environmental impact assessment, delves into the effect bad weather could have on the vessel, to be placed in the middle of Marsaxlokk Bay.

The nautical risk assessment also details the safety precautions that will need to be in place and how the tanker, or floating storage unit, will affect general harbour movements due to its position.

Asked for a copy of the study, which needs clearance from the Environment and Resources Authority, a spokeswoman for Electrogas, the private consortium developing the gas-fired plant, said it “has no remit to make this report public”. The Times of Malta has already asked Transport Malta and the Occupational Health and Safety Authority for a copy of the assessment. Both refused, saying they were not its owners.

Electrogas, which paid for the study, said the company assumed the study would be part and parcel of the public consultation process in the run-up to the IPPC (integrated pollution prevention and control) permissions process.

The spokeswoman said Electrogas followed international best practice and EIA requirements, adding it had handed over copies of the study to the relevant authorities for their analyses.

No remit to make this report public

To commence operations, the consortium, which includes business partners Gasan and Tumas among its shareholders, needs an IPPC permit by the ERA. The permit can only be issued after a thorough public consultation process.

This newspaper is informed that the new power plant, when completed, will not be run by Electrogas itself, because the management has been subcontracted to an Irish company.

The spokeswoman confirmed that ESB International was chosen earlier this year as operator and maintenance contractor for the power plant section of the Electrogas facilities in Delimara.

“The company is already on site and progressing well with mobilisation responsibilities, which include a review of the power plant equipment and working alongside Siemens as they continue testing procedures for safe operations in readiness for when they will operate the plant on behalf of Electrogas,” she added.

No answer was forthcoming when she was asked about the duration of the management contract, though the spokeswoman said that some former Enemalta employees had already been seconded to the Irish company.

Electrogas would not say when the new power plant, which was originally planned for March 2015, will begin operations.

According to the latest announcements by Minister Without Portfolio Konrad Mizzi, the new power plant should be up and running by the end of summer. However, when the Times of Malta asked the Office of the Prime Minister last month for the latest time frame, a spokesman would only say that a public event would soon be held to give new dates.

The European Commission is still analysing a €360 million unprecedented government guarantee granted to banks to lend money to the consortium for the financing of the project. The project is tied to an 18-year power purchasing agreement, which is also under EU scrutiny.

Prime Minister Joseph Muscat and Dr Mizzi flew to Singapore at the beginning of this month to attend the ‘sailing off’ ceremony of the tanker, which is called the Armada LNG Mediterrana.

The Armada was still docked at the shipyard in Singapore as of yesterday.