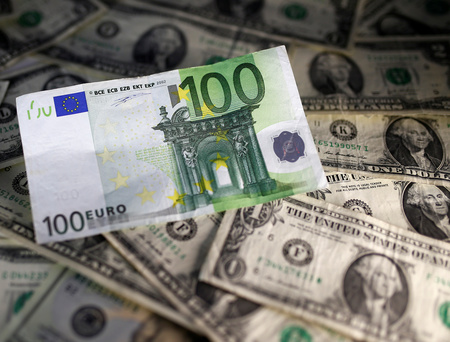 The euro edged lower on Tuesday, catching its breath after a relief rally sparked by the first round results of the French election, while the Canadian dollar fell on news of U.S. duties on Canadian softwood lumber.

The euro is likely to show resilience given the low chances of Le Pen winning the second round vote on May 7, said Satoshi Okagawa, senior global markets analyst at Sumitomo Mitsui Banking Corporation in Singapore.

However, the near term gains will be limited in the wake of the common currency’s short-covering rally, he added.

“It will be hard to aggressively buy the euro to levels above $1.10,” Okagawa said.

Opinion polls indicate that the business-friendly Macron, who has never held elected office, will take at least 61 percent of the vote against Le Pen after two defeated rivals pledged to back him to thwart her eurosceptic, anti-immigrant platform.

Analysts say the yen, which often rises in times of market turmoil, could rally again if worries about geopolitical tensions over North Korea increase.

U.S. President Donald Trump said on Monday the U.N. Security Council must be prepared to impose new sanctions on North Korea as concerns mount that it may test a sixth nuclear bomb as early as Tuesday.

Nonetheless, the dollar’s upside against the yen may be limited in the near term, said Shinichiro Kadota, senior FX strategist for Barclays in Tokyo.

“U.S. economic data has been a bit on the weak side recently and U.S. bond yields have had a hard time rising. So it looks like the dollar will be pretty heavy on the topside,” Kadota said.