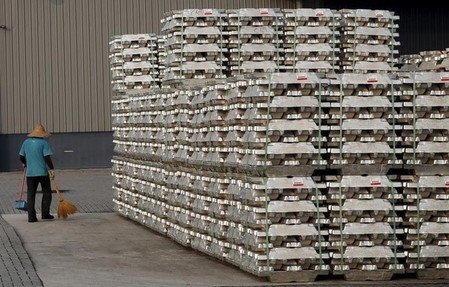 North Korea’s foreign minister said the country could detonate a hydrogen bomb over the Pacific Ocean in response to President Donald Trump’s speech before the United Nations that warned the U.S. would annihilate North Korea if forced to defend itself or its allies.

The threat, made in remarks by North Korean Foreign Minister Ri Yong Ho in New York and reported by South Korea’s Yonhap News Agency, would mark a dramatic escalation in action from Pyongyang, which in the past month has already launched two intermediate-range ballistic missiles over Japan and tested what it claimed was a hydrogen bomb.

“Maybe we might consider a historic hydrogen bomb test over the Pacific Ocean,” Mr. Ri said outside his Manhattan hotel, according to the Yonhap report. He said he didn’t know for sure exactly what North Korean leader Kim Jong Un was planning.

The remarks from Mr. Ri came hours after Mr. Kim said through Pyongyang’s state media early on Friday that he was considering the “highest level of hard-line countermeasure” after Mr. Trump’s speech.

South Korean President Moon Jae-in, who was flying from New York to Seoul, didn’t have any comment, a spokesman said. The U.S. State Department didn’t immediately respond to a request for comment.

Hours before Mr. Ri’s remarks, Mr. Kim, in a rare first-person statement published through the official Korean Central News Agency, said Mr. Trump was a “gangster fond of playing with fire” who was unfit to be president and described his U.N. remarks as the “mentally deranged behavior” of a frightened leader.

“I am now thinking hard about what response he could have expected when he allowed such eccentric words to trip off his tongue,” Mr. Kim said in the statement. “Whatever Trump might have expected, he will face results beyond his expectation.”

Mr. Kim didn’t specify what countermeasures he had in mind but warned he would “definitely tame the mentally deranged U.S. dotard with fire,” suggesting the possibility of further nuclear and missile tests.

Earlier Thursday, Donald Trump had launched a new phase of a crackdown on North Korea, expanding sanctions to hit any individuals, companies and financial institutions doing business with Pyongyang, not only those involved in aiding its weapons program or laundering funds.

The action steps ups Washington’s effort to strangle financing to the nuclear-armed state in the face of repeated missile tests by North Korea.

“Foreign banks will face a clear choice: doing business with the United States or facilitate trade with the lawless regime in North Korea,” Mr. Trump said in remarks at a lunch with leaders of South Korea and Japan in New York, alongside U.N. meetings.

China has called S&P’s downgrade of the country’s credit rating a “wrong decision.”

There was nothing new in concerns expressed by S&P about China’s rapid debt buildup, the Ministry of Finance said. The Chinese government has pushed supply-side reforms in recent years, steadying China’s economic growth fundamentals while improving the quality of growth.

“It is mind-boggling for S&P to lower China’s sovereign rating in such a situation,” the ministry said.

Equity markets across the Asia-Pacific were lower on Friday, with stocks in Japan reversing early gains following fresh threats from North Korea, while China-related stocks declined on the S&P credit-rating downgrade.

A stronger yen sent the Nikkei Stock Average down 0.2%, after earlier being up as much. In South Korea, the Kospi also extended declines and was down 0.4%.

“If you look around there are just not a lot of reasons to buy,” said Chris Weston, chief market strategist at IG Markets. “The commodity trade is under pressure, people are talking about tightening in various economies, [and] the North Korean hydrogen threat is keeping people on their toes.”

Meanwhile, Chinese shares were broadly lower with the Shanghai Composite Index off 0.4%. Still, analysts don’t expect the selling pressure to continue, as the S&P downgrade had been anticipated by the market, and brings its rating in line with Moody’s, which downgraded the nation in May, and Fitch, which made its cut in 2013.

“Obviously the Chinese markets have rallied well since the initial Moody’s downgrade” in May, said David Millhouse, head of China research at Forsyth Barr Asia.

In Hong Kong, the Hang Seng Index was off 0.6%, as S&P also downgraded its credit rating for the city, tracking its decision for mainland China.

Amid the broad declines, the outlier on Friday was Australia, with its benchmark stock index in positive territory, boosted by some bargain hunting in stocks following recent declines. The S&P/ASX 200 was last up 0.3%.

The Dow Jones Industrial Average slipped 0.2%, the S&P 500 slid 0.3%, while Nasdaq fell 0.5%. Some investors and analysts attributed the stall in the stock market to lingering uncertainty after the Federal Reserve suggested Wednesday that it was open to the possibility of an interest-rate increase in December.

“The market is sorting through to what extent it needs to incorporate future Fed activity into its thinking,” said Mike Allison, a portfolio manager with Eaton Vance. “There’s some uncertainty as to the impact since interest rates have been so low for so long.”

News that North Korea may test a nuclear bomb in the Pacific sent the yen, a haven asset, surging higher in early Asian trade.

The dollar, which was as high as Y112.55 before the news broke, fell as low as Y111.97 before rebounding slightly. Peter Siong, a forex strategist at UOB Kay Hian in Singapore said the news only played as a trigger for traders to book some profits going into the weekend. USD/JPY pair had gained some 1.5% following the FOMC decision.

“Unless there is some actual testing (of the bomb), I don’t expect the retracement to last,” he said.

“The Fed reminded markets that it can still surprise on the hawkish side, ” said analysts at TD Securities in a research note. “The market was looking for the Fed to scrap…a rate hike this year or next.”

Markets are now pricing in a 78% chance that the Fed raises rates again this year, up from 54% a week ago, according to CME Group data. Goldman Sachs assessed the odds of a December rate increase at 75%, up from 60% before Wednesday’s Fed meeting, citing Chairwoman Janet Yellen’s skepticism that weakness in inflation over the last several months will endure.

U.S. government bond prices extended a nine-day streak of declines the day after the Fed signaled that it could raise rates again in December.

The yield on the benchmark 10-year Treasury note rose to 2.278% from 2.276% Wednesday. Meanwhile, the price on the two-year Treasury note, which is more sensitive to market expectations for Fed policy, was steady, with its yield at 1.442%, the highest closing level since November 2008.

Oil prices were little changed in early Asian trade following an uninspiring U.S. session, as investors awaited guidance on whether OPEC will do more to ease the global supply glut in a meeting scheduled later in the day, and specifically if the cartel would extend a production-cut deal beyond March next year.

Leading into the meeting, members appear upbeat, with both the Russian and Kuwaiti oil ministers saying that compliance with output cuts was improving and was above 100%.