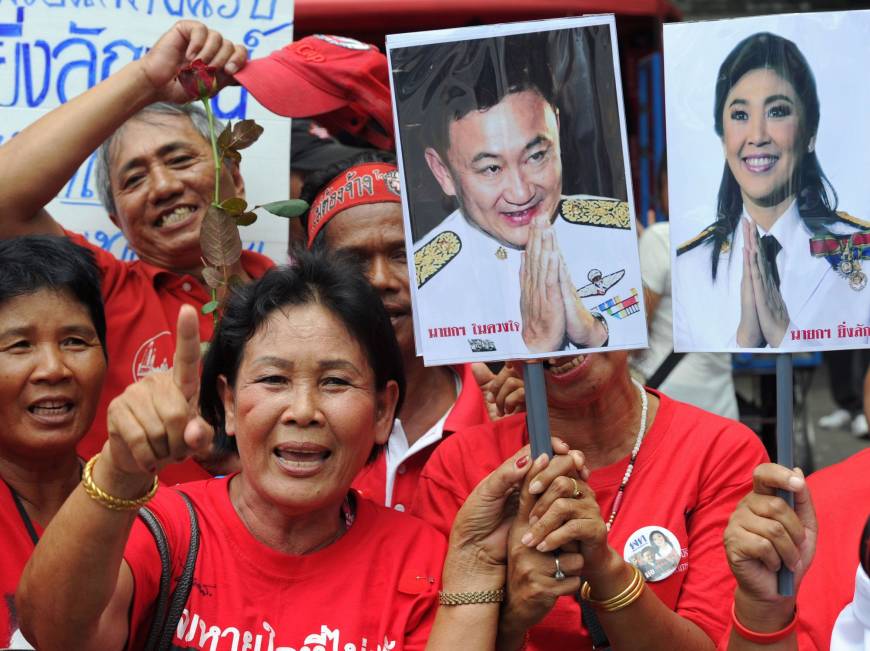 SINGAPORE/BANGKOK – The self-imposed exile of another popular Thai leader means the junta won’t need to deal with a high-profile prisoner. Yet another question remains: Can Thaksin Shinawatra’s family finally be beaten at the polls?

Thaksin and his allies have won every election dating back to 2001, only to have the military or courts help remove them from power. His sister, Yingluck Shinawatra, fled the country last week rather than face prison for a costly rice policy during her time as prime minister, which ended in 2014 weeks before a coup. One of her Cabinet ministers received a 42-year prison sentence.

“End of Shinawatra Era,” declared a headline in the Bangkok Post after Yingluck reportedly fled to Dubai, with the story saying “the curtain has closed on the Shinawatra clan’s grip on Thai politics.” Other analysts aren’t so sure.

“With no opportunity since 2014 to gauge her popularity, we just have to assume that Yingluck and her brother are as popular as ever and would win an election if it was held tomorrow,” said Nicholas Farrelly, associate dean of the Australian National University’s College of Asia and the Pacific in Canberra.

Thailand has become increasingly polarized over the past decade as Thaksin’s opponents — backed by royalist judges, soldiers and bureaucrats — have undermined the will of voters. Deadly street protests, frequent changes of government and a stifling political climate have affected the country’s economy.

Prime Minister Prayuth Chan-ocha told reporters Monday that a security team had been assigned to investigate how Yingluck fled the country.

Yingluck was often followed by plainclothes police, her aides said. During a provincial tour last year men in military uniform would often follow her as she greeted supporters.

Critics are now asking how a person under close scrutiny by security forces could leave the country without being noticed.

“How should I know?” was Prawit’s response to reporters who asked him that Monday.

Deputy national police chief Gen. Srivara Ransibrahmanakul told reporters police intelligence showed Yingluck was still in her Bangkok home at least up until 2 p.m. on Wednesday. He did not elaborate.

“Yingluck’s fleeing is considered a relief similar to when her brother Thaksin fled,” Warut Siwasariyanon, the head of research at Asia Wealth Securities Co. in Bangkok, said by phone.

“Political parties and the military now will gear toward the goal of a general election in late 2018. So any political violence won’t be beneficial for both of them because it will force the election to be postponed.”

Thaksin, a telecom tycoon who entered politics in the 1990s, endeared himself to millions of rural Thais with price support programs for rice and the implementation of cheap health care. His opponents accused him of corruption and challenging the power of the monarchy. He eventually fled to avoid a prison sentence for abuse of power, charges that he denied.

While Thaksin hasn’t stepped foot in Thailand since 2008, he’s maintained influence through his Pheu Thai party. In 2011, Yingluck became prime minister after the party campaigned with the slogan “Thaksin Thinks, Pheu Thai Does.”

The parliament’s push for an amnesty bill that would allow Thaksin to return to Thailand triggered street protests that eventually prompted the military to seize power. Yingluck faced up to a decade in prison if convicted of failing to curb losses from her government’s $26 billion rice-purchasing program for poor farmers. She has denied the charges and said the two-year trial is politically motivated.

The military government is doing what it can to ensure that it still has power over elected politicians no matter who wins. The constitution promulgated in April calls for a two-decade national strategy and may allow appointed soldiers, judges and bureaucrats in the upper house to overrule elected leaders in the House of Representatives.

Former Prime Minister Abhisit Vejjajiva, a longtime opponent of Thaksin, warned in an interview earlier this month that senators could in theory seek to block a party’s candidate for prime minister. That could lead to a “tug-of-war” between the two bodies after the election, he said.

Past efforts to kill off Thaksin’s influence haven’t worked. Political bans, military takeovers, asset seizures and jail sentences have tended to boost sympathy for his allies, which are now in the Pheu Thai party.

Yingluck’s exit “will do a lot of damage to national reconciliation,” said Florian Reinold, regional coordinator in Thailand for the Robert Bosch Foundation’s Lectureship in Asia scholarship program. “It will fuel Pheu Thai supporters’ anger.”