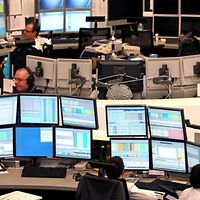 (Bloomberg) With the start of Europe’s MiFID II rules less than five months away, banks and asset managers are scrambling to prepare for a regulatory overhaul that risks doing more harm than good to the finance industry.

Aimed at making markets fairer and more transparent, the European Union’s revised Markets in Financial Instruments Directive impacts everything from how firms trade to how research is distributed. Yet practitioners are concerned that the hundreds of pages of rules conceal problems that regulators never fully considered.

“The bubble of MiFID II feels painful,” said Gerard Walsh, who heads up equities business development for Northern Trust Securities in London. “It’s a bit like Britain all of a sudden changing to driving on the right-hand side. It will create disruption but eventually people will adapt.”

Below are just a few of the consequences of the new rulebook that officials may not have intended:

Forcing banks to charge for research separately from trading services is among the most controversial aspects of the new regime. An immediate consequence might be that spending on analysis declines as the buy side becomes more discerning. U.S. and European fund managers will probably cut more than $300 million from their research budgets, according to a survey earlier this year by Greenwich Associates. This equates to a 7 percent drop in commission spend for European firms and 5 percent for U.S. ones.

Wall Street banks may not be able to sell their U.S. research to European clients because of the regulatory conflict between the two regions — which looks unlikely to be resolved before MiFID’s January implementation date. Charging separately for research is banned in the U.S. unless lenders register as investment advisers.

Job losses (and some gains)

Less demand for research will mean less demand for analysts. McKinsey & Co. expects the rule change to cost hundreds of jobs as banks cut about $1.2 billion of investment in the area. The top 10 sell-side banks currently spend about $4 billion a year on research, but that will drop 30 percent after MiFID, the consultant said. And this is an area that’s held up relatively well since the crisis: Headcount in cash equity research has fallen by just 12 percent since 2011, compared with as much as 40 percent in sales and trading.

There is an upside, for a lucky few anyway, as asset managers including Schroders Plc build up their in-house research teams to offset MiFID’s impact. Vanguard Group, the world’s largest mutual-fund company, also plans to rely more on internal analysis.

With banks likely to cut analysts, whole industry teams that aren’t ranked in the top three or four in their field could be axed from trading floors. Northern Trust’s Walsh reckons those teams may choose to strike out on their own, helping to create “a cottage industry of specialization.” It’s not just low-ranked researchers, either: Three analysts from Barclays Plc in New York are said to have jumped ship and started their own boutique firm.

Because firms will have to document transactions in far more detail, there’s concern MiFID II will have a chilling effect on sales in continental Europe. Banks and insurers selling funds may limit the number of asset managers they deal with, curtailing the competition that EU regulators say they want to promote. Boston-based consultancy Cerulli Associates says business in southern Europe is likely to be the worst affected.

MiFID II requires firms involved in selling investment funds to make sure that investors are sold products appropriate to them — defined as the “target market.” Under the U.K.’s interpretation of the rules, portfolio managers also have to adhere to this requirement as they’re classed as product distributors. “The rules may see the universe of companies that fund managers feel able to invest in shrink,” said Dick Frase, a partner at law firm Dechert. “It means that they’ll have to consider whether an individual investment decision, such as picking one stock over another, is appropriate for the target market. It doesn’t make any sense.”

Already having to contend with the aftermath of Brexit, London may see its appeal further reduced as MiFID II makes the city a more complicated and expensive place for overseas investment managers to do business. “New York, Boston, Hong Kong and Singapore will become more attractive,” said Dechert partner Peter Astleford. Regulatory conflicts between regimes will be “a discouragement factor” to doing business in London to the tune of “say five to 10 percent,” he said.

Trading in blue-chip stocks and trillions of dollars of derivatives could potentially be thrown into turmoil by the overhaul unless the EU acts fast to ensure its new rules have so-called equivalence with other regimes around the world. Regulators in countries such as the U.S., Switzerland and Singapore are racing to determine whether their rules are as tough as those in Europe. If the regimes don’t line up, MiFID II could disrupt trading on platforms in those countries, fracturing global markets and potentially driving up costs.

To make life easier, and business more efficient, some firms are considering whether to apply the MiFID II rulebook beyond Europe. BNP Paribas Asset Management plans to follow the principles globally, saying it would be “extremely complex” to distinguish between portfolios covered by the new EU rules and others. Fund managers in the U.S. are considering pricing and assigning research costs internally, and disclosing those costs to clients, according to Amrish Ganatra at research payment-processing platform Commcise.