Standard Chartered and Citibank have outperformed their Indian public and private sector peers in customer satisfaction, a study conducted by the Indian Customer Satisfaction Index (ICSI) has found.

HSBC tops the list of 12 large Indian banks with a customer satisfaction score of 76, with Standard Chartered and Citibank close on its heels at 74 and 73 respectively. 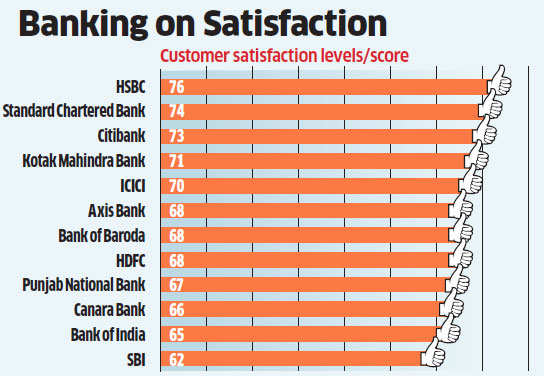 The survey, carried out in 2015-2016 by Delhi-based firm Hexagon Consulting and the US-based American Customer Satisfaction Index (ACSI), polled close to 7,000 customers of these 12 banks across the country.

“The range of scores is quite wide. While some banks have a much higher score, others have fared poorly,” said Bawa Grover, managing partner, Hexagon Consulting.

Moreover, the Indian banking industry also lags its global peers in developed and emerging economies when it comes to customer satisfaction. The average customer satisfaction score of Indian banks is 69, which is much lower than that of its counterparts in Colombia (80), the US (76), the UK (76), South Africa (76) and South Korea (74).

“One area where Indian banks can improve is complaints handling,” said Grover. Indian banks’ performance in customer loyalty too was lacklustre, as they secured an average customer loyalty score of 65 as per ICSI, which is lower than scores secured by banks in Singapore (74), US (72), South Africa (71) and UK (67).

In an online survey conducted by ET Wealth last November nearly one-third of the 1,313 respondents said they were not satisfied with their banks. A whopping 60% said their banks sold them investment products that did not suit their requirements.

Banks do bonds for free
Though underwriting fees have been falling for a decade, the rainmakers of the world’s biggest financial centres are now doing transactions for heavy discounts and in some cases for no charge, effectively taking a hit to profits in order to buy market share.

Previous [改革追踪·看落实] 广西家政培训“大篷车”促贫困女性就业
Next Maharashtra, Gujarat in the race for India’s first IAC