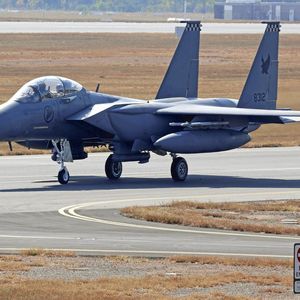 AFTER a successful end to the recent Exercise Pitch Black in northern Australia, a squadron of Singaporean jet fighters will call RAAF Amberley home for the next three weeks.

Arriving on Monday, the aircraft will remain at Amberley until September 15, conducting regular training flights.

The aircraft are F-15SG fighter jets from the Republic of Singapore Air Force (RSAF), in Australia as part of Singapore’s commitment to Exercise Pitch Black 2016.

Also at Pitch Black were Singapore’s other main strike fighter, the F-16, supported by KC-135 tanker and G-550 surveillance aircraft.

During Pitch Black exercises, the RSAF F-15s were involved in joint training flights with aircraft from Australia and other nations.

Despite this, their deployment to Amberley is expected to result in the aircraft flying without any Australian Air Force involvement.