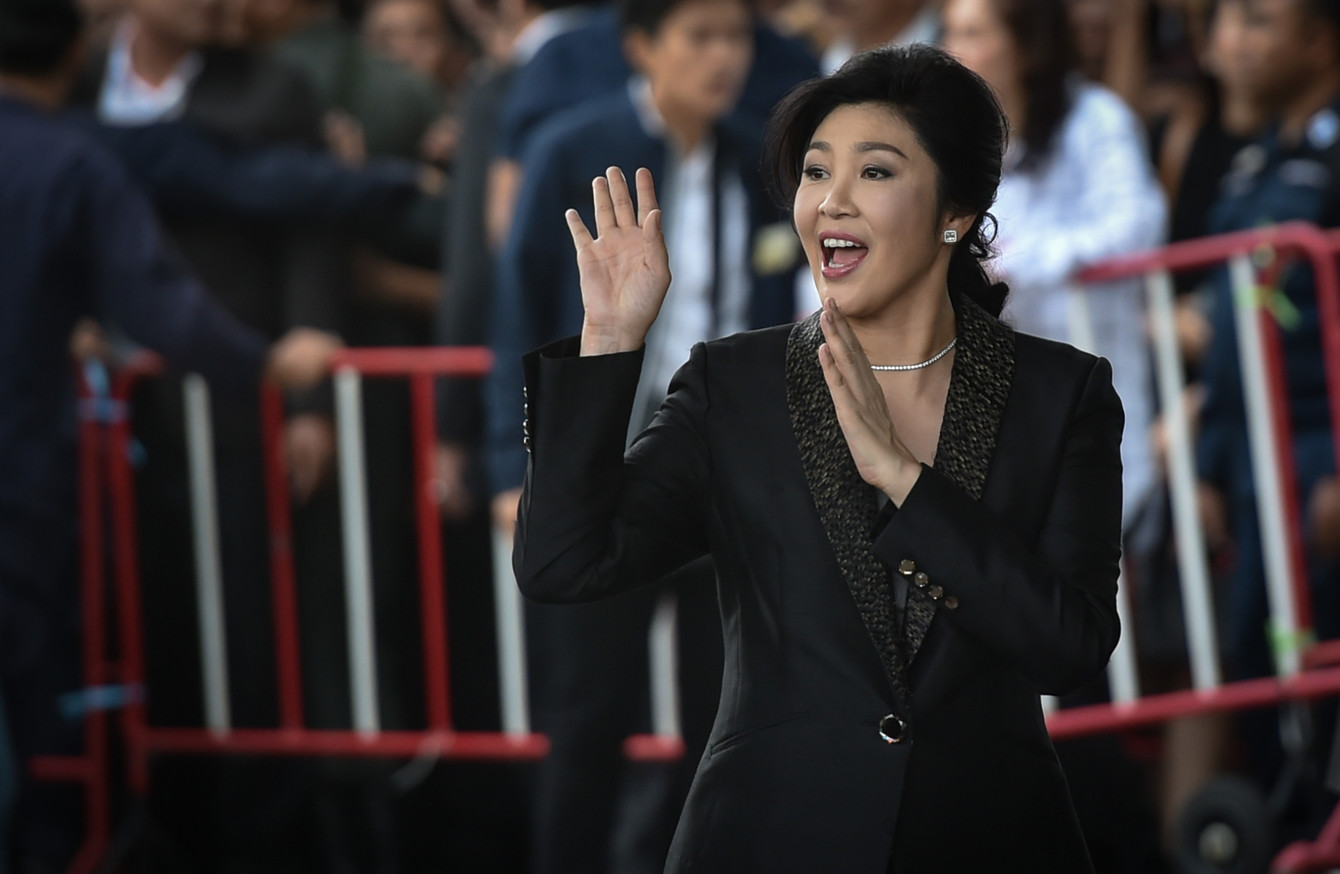 Former Thai Prime Minister Yingluck Shinawatra waves to supporters as she arrives at the Thai Supreme Court at the start of this month.
Image: Xinhua News Agency/PA Images 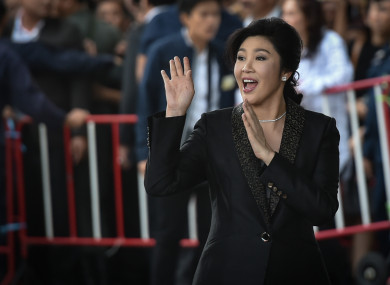 Former Thai Prime Minister Yingluck Shinawatra waves to supporters as she arrives at the Thai Supreme Court at the start of this month.
Image: Xinhua News Agency/PA Images

THAILAND’S FORMER PRIME minister Yingluck Shinawatra missed a court appearance in a negligence trial today that could have seen her jailed, prompting the Supreme Court to issue an arrest warrant amid snowballing speculation that she has fled the country.

Thousands of supporters, outnumbered by security forces, waited from dawn for a glimpse of Thailand’s first female prime minister, but she did not show, with a senior party source telling AFP she is “likely in Singapore”.

If her flight is confirmed, Yingluck will have joined her billionaire brother Thaksin in self-exile, knockout blow to the family and their political ambitions.

Thailand is deeply divided between the Shinawatras and their political base, which is mainly drawn from the rural poor and a royalist army-aligned elite, who loathe the clan and refuse to cede power to democratic governments.

Yingluck’s government was removed by a military coup in 2014.

In a day of high drama, Yingluck ducked her court hearing for negligence over a flagship rice subsidy policy, which carried up to 10 years in prison and a life ban from politics.

“Her lawyer said she is sick and asked to delay the ruling… the court does not believe she is sick… and has decided to issue an arrest warrant,” fearing she may flee the country, lead judge Cheep Chulamon told the court, rescheduling the verdict to 27 September.

A minister in her government was jailed hours later for 42 years in a separate trial for corruption linked to the policy.

Thai junta chief Prayut Chan-O-Cha denied knowledge of her whereabouts but ordered border checkpoints “to be stepped up”, while his number-two Prawit Wongsuwon said it was “possible” Yingluck had fled through neighbouring Cambodia.

A senior source in the Shinawatras Pheu Thai party told AFP that “as of now she is likely in Singapore… it’s impossible she left without the military greenlight”.

Yingluck’s brother, Thaksin Shinawatra also a former premier, fled Thailand in 2008 before he was convicted of graft and handed a two year jail term.

The telecoms tycoon who once owned Manchester City football club, has not returned since and his Thai passport has been revoked.

He is believed to use a Montenegrin passport to travel between homes in Dubai, London, Hong Kong and Singapore.

The clan had clung on in Thailand’s treacherous political game for more than a decade despite two coups, deadly protests, a cascade of legal cases and huge asset seizures. 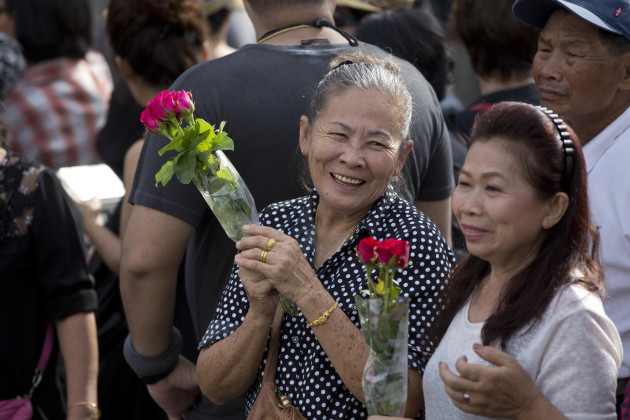 Thaksin remains a galvanising force for his party and a canny political operator.

But analysts say if both siblings are now in exile their time in Thailand’s political arena is over.

“It is the end of the Shinawatras and the Pheu Thai party in politics,” Puangthong Pawakpan, a Thai politics expert at Bangkok’s Chulalongkorn University.

“With two family members as fugitives, the family loses political legitimacy,” she said, adding that Yingluck’s departure would be welcomed by a Thai junta weary of the prospect of her political martyrdom in jail.

To many supporters Yingluck had finally emerged from her elder brother’s shadow, drawing on a star quality throughout her 18-month trial that is absent among the gloomy cast of ageing generals who rule Thailand.

Her flagship rice subsidy poured cash on her family’s rural political heartland, paying up to twice the market rate for the grain.

But it was beset by graft and led to billions of dollars of losses.

She pleaded not guilty to the charges, saying she is the victim of a “subtle political game”.

Rumours of her flight were met with understanding from supporters who lingered outside the court.

“The Thai prime minister has done her best, she has sacrificed a lot,” said 64-year-old Seksan Chalitaporn.

“Now the people have to fight for themselves.” 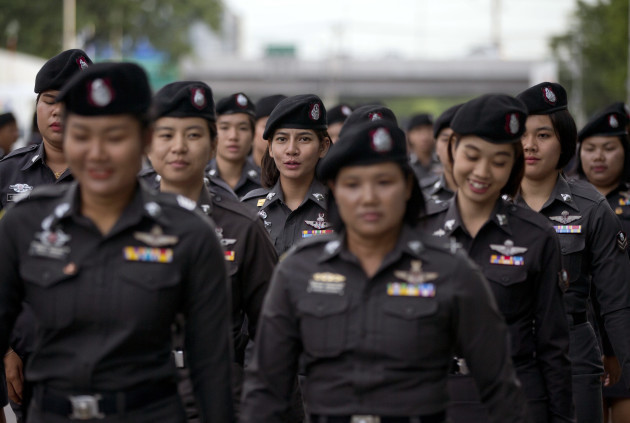 There has been heavy security outside the court since the beginning of the trial last month.
Source: Gemunu Amarasinghe/PA

In a Facebook post yesterday, Yingluck asked her followers to stay home to avoid any incidents stoked by people with “ill-intention against the country and us”.

The Shinawatra family emerged as a political force in 2001 when billionaire patriarch Thaksin swept to power.

He jump-started the economy and provided the most extensive pro-poor welfare schemes in Thai history.

But critics accused him of using political power to further his business interests.

He remains loathed by the Bangkok royalist elite but cherished by the rural poor.

A coup toppled him in 2006 and he fled overseas.

Historically the Shinawatras have been able to mobilise huge crowds of supporters, known as the Red Shirts, to take to the streets when the family’s political fortunes have waned.

But three years of repressive junta rule has successfully quashed any widespread opposition to the military for now.

The country’s democratic future also looks bleak, with a junta-scripted constitution severely cramping the power of any future elected governments.

The junta has trailed elections for next year, but the timetable has repeatedly slipped.