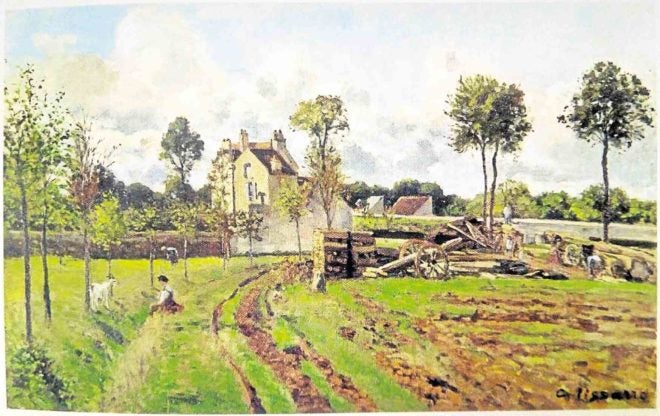 “The Cradle,” by Berthe Morisot

SINGAPORE—Some 60 works by Auguste Renoir, Claude Monet and other French Impressionists from “peerless” collection of the Musée d’ Orsay are on view at National Gallery Singapore (NGS). It is the first ever Impressionist exhibit in Southeast Asia.

“Colours of Impressionism: Masterpieces from the Musée d’ Orsay,” said Paul Perrin, cocurator with Marine Kisiel, “gives the nod to the Impressionists’ radical use of color,” and the paintings “are presented in thematic sections based on colors” used by the foremost practitioners of the revolutionary style.

The Impressionist exhibit is one of two in the larger program called “Century of Light,” which, said Eugene Tan, NGS director, “demonstrate the range of painting styles and art movements that developed in Europe during this post-Enlightenment period of innovation and change.”
The other exhibit is the celebrated “Between Worlds: Raden Saleh and Juan Luna,” which is the first major exhibit on the Philippine master in 30 years.

The NGS exhibit of Luna works, until March 11, 2018, is very significant for Filipinos because it is the first time “The Death of Cleopatra,” which won for him the silver in the Madrid Exposition in 1881, is being exhibited outside of Europe.

Especially for Luna, the Impressionist show may be significant and very instructive to art scholars and collectors since he was born around the time when Impressionism made it first inroads. 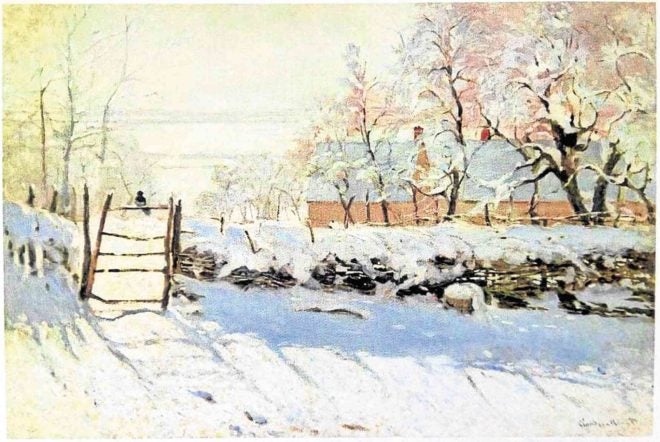 “The Magpie,” by Claude Monet

But it should be disabused from everyone’s mind that Luna was imbibing the Impressionist influence in some of his later works. As art historian and critic Santiago Albano Pilar has pointed out, many of the works purported to indicate Luna’s Impressionist turn were actually studies.
And as the Singapore double-exhibit shows, if there was a stylistic progress in Luna, it was a move from his Neoclassic roots not toward Impressionism but toward Realism, as illustrated by the titles of his works along this vein on display at NGS: “Las Ignores” (The Unknown Ones; 1890-1891), which depicts a funeral cortège; and “Avant-garde” (The Advance Guard; 1892), about poor old working women.

Perrin said the development of new pigments was highly significant for modern art since it enabled artists to go out of their ateliers and work outdoors to paint nature as it was. 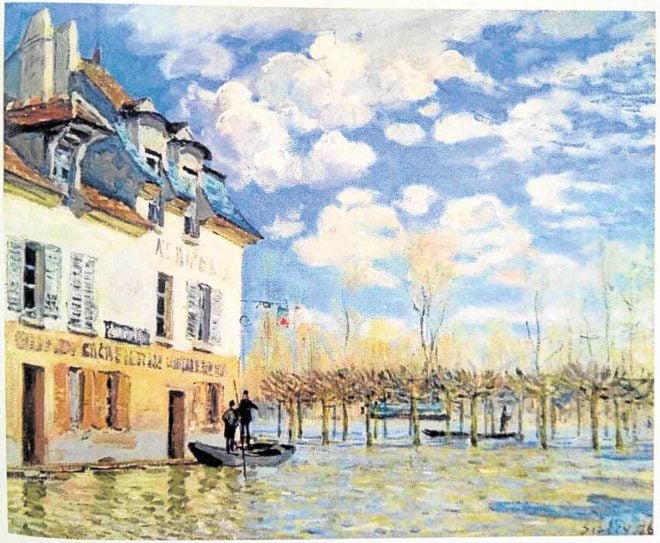 “Boat in the Flood at Port-Marly,” by Alfred Sisley 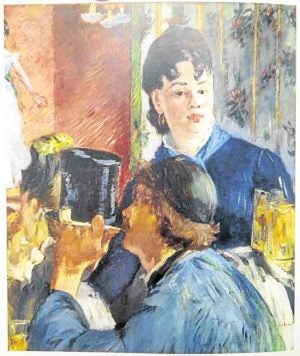 “The Beer Maid,” by Manet

“Since artists were able to move from their studios to the open air, they were able to transform landscape paintings through their close studies of light,” Perrin said.

The move outdoors also meant a movement out of the Salon style of academic painting governed by Neoclassic themes and techniques which initially animated Luna’s art.

But Luna’s move toward realist themes and subjects may have some moorings on Impressionist art, after all.
In a very instructive survey for journalists of the exhibit, Perrin said Impressionism started with “the radical use of black” in the 1850s and 1860s.
Black and earth tones best represented the real world and the lives of ordinary people, Perrin said. It also helped that the emerging middle-class wore black and the color was seen as the “color of modernity.”

Impressionists and non-Impressionists used black clothing to explore “new color harmonies,” so that there were experimentations with monochrome.
In the NGS exhibit, the revolution in black is represented by Édouard Manet’s “Moonlight over the Port of Boulogne” (1869). Although not really officially an Impressionist but who was close to the movement, Manet renders through free brushwork a stark but haunting nocturnal landscape.
Manet’s art of the limited palette was to influence other Impressionists like Renoir, evident in the latter’s “Madame Darras” (circa 1868). 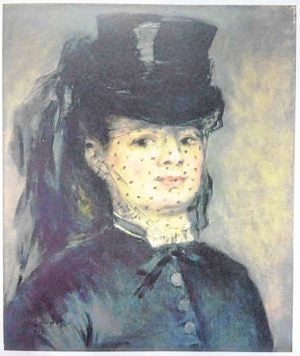 Manet was also the pioneer of painting modern life. “The Beer Maid,” his 1878-1879 work included in NGS, captures a fleeting moment when the subject looks straight into the viewer with mugs of beer in her hand, her figure partly obscured by one of the bar habitués, a man smoking a pipe.
Berthe Morisot’s “The Cradle” (1872), showing a mother looking at her sleeping baby in the nursery, underscores that the highly innovative use of color and light of the Impressionists could be applied as well in tender domestic scenes.

But, of course, the Impressionists were known for their innovative approach to representing light.

In the NGS exhibit, two striking works on unorthodox subjects exemplify the Impressionists’ profound use of light.
In Alfred Sisley’s “Boat in the Flood at Port-Marly” (1876), two men on a boat are presented amid the flood. Sisley reflects and contrast the colors by echoing the blue of the sky through shades of blue in the trees, the building and the water.

Monet paints a winter landscape in “The Magpie” (1868-1869). He catches the fleeting moment of the bird perching on a wooden gate amid the snowy vista. To provide contrast and to emphasize the effect of light on snow, the artist puts fleeting dabs of blues, pinks and yellows, bringing to life the strong white brushstrokes. 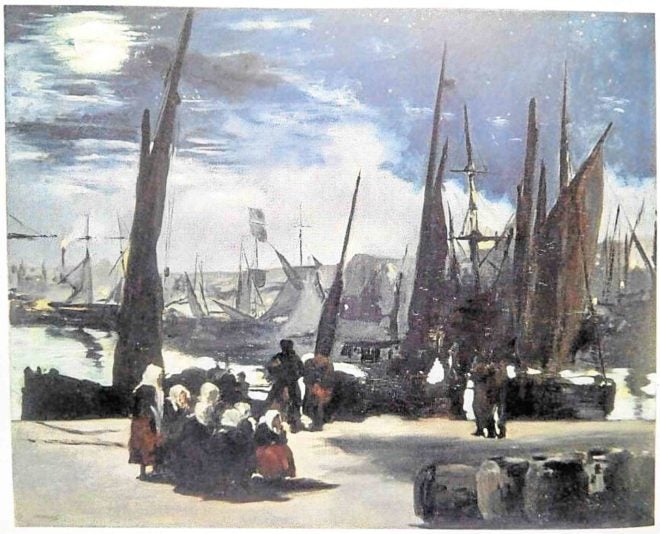 “Moonlight Over the Port of Boulogne,” by Édouard Manet

Later Monet would push the use of color to radical limits. In his painting of the Rouen Cathedral (1893), he emphasizes the effects of light on the massive structure by privileging a single color. 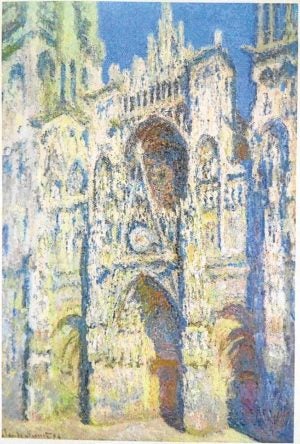 Further landscapes in the NGS exhibit (like Paul Signac’s “The Red Buoy, ”1895) illustrate the movement toward “Neo-Impressionism.” While the initial movement played around with free brushstrokes, the later development aimed at “a modern synthesis of methods based on science,” Perrin said.

In the exhibit, serving as a bridge between Impressionism and Modernism is Paul Cézanne’s landscape, “The Gulf of Marseilles Seen from L’Estaque” (1878-1879).

The Impressionists’ later development is represented in Renoir’s beautiful “Gabrielle with a Rose” (1911), in which he abandons modern subjects to experiment with the European tradition of the nude. In this notable work, Renoir plays with contrasts but of a profoundly different kind.

As explained by Perrine: “While Cézanne could be credited with contrast of colors, Renoir achieved contrast of colors in spaces.”
“Impressionism is one of the most influential movements in the history of art, fascinating artists and art audiences around the world and across the centuries,” said Tan. “In fact, the influence of Impressionism can be seen in many works of Southeast Asian artists.”

Many Filipino artists have been influenced by the movement as well, such as National Artist Federico Aguilar Alcuaz, Ibarra de la Rosa and Norma Belleza. 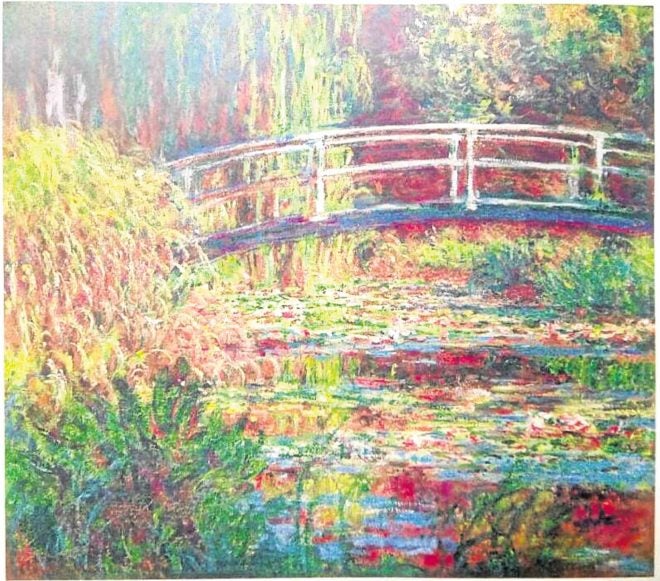