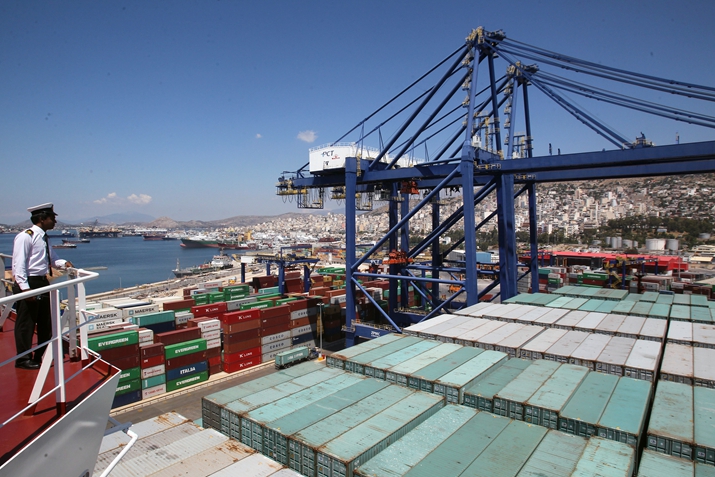 The global shipping industry has limped along battered and bruised since the fall out of the global financial crisis, a condition exacerbated by weakened demand and surplus supply of transport capacity. However, recent activities in China’s ongoing Belt and Road Initiative have served to mitigate the damage, offering a life-line to ailing global shipping enterprises, some of which are realigning to seize opportunities unlocked by the move.

An example of this move is China COSCO Shipping Corp. Ltd., the largest shipping conglomerate born from the merger of China Ocean Shipping (Group) Co. and China Shipping (Group) Co., which has set out formulating and implementing its port layout along the Silk Road Economic Belt and the 21st Century Maritime Silk Road. In September 2015, its Hong Kong-based branch company COSCO Pacific acquired the Kumport Terminal in Turkey, while in the first half of this year, it renewed and upgraded its port investment project with the Port of Singapore Authority, purchased Piraeus Port Authority in Greece and invested in Euromax Terminal Rotterdam in Holland.

To date, China COSCO Shipping has invested in more than 50 ports along the Belt and Road, most being scattered around the Maritime Silk Road, with 11 located overseas, according to Xu.

“Entering 2016, China COSCO Shipping has further optimized its overseas layout by investing in ports located in Holland and Singapore and acquired an over 60-percent stake in the Piraeus Port Authority, which has aroused extensive attention in the global shipping industry,” said Xu. 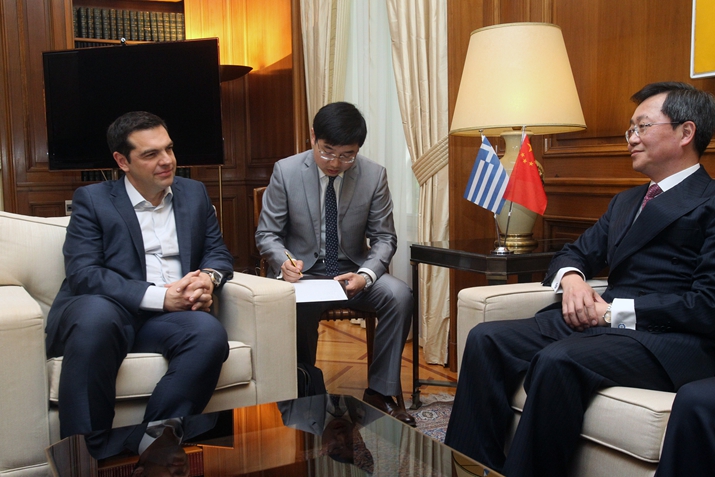 Greek Prime Minister Alexis Tsipras (left) and Xu Lirong, Chairman of China COSCO Shipping Corp. Ltd., talk with each other at the signing ceremony of the purchase agreement of Piraeus Port in Athens on April 8 (XINHUA)

Acquisitions on the Silk Road

The acquisition showed the advantage of Chinese enterprises teaming up to go global and is an exemplary project for countries along the Belt and Road to realize mutual benefit and achieve win-win results, said Gu Jingqi, Chinese Consul General to Istanbul.

Located on the northwest coast of the Marmara Sea on the European side of Istanbul, Kumport is a gateway to the Black Sea and a strategic interchange between Europe and Asia. The port has six berths, with a capacity to handle 1.84 million 20-foot equivalent units (TEUs) of cargo and can expand to 3.5 million TEUs. In 2014, it registered a container throughput of 1.41 million TEUs, accounting for 17 percent of Turkey’s total container throughput. Financially, the terminal is in sound shape, maintaining a compound annual growth rate of around 30 percent in container volume from 2009 to 2014.

“Turkey, as the hinterland of Kumport, stands at a strategic location along the Silk Road Economic Belt and the 21st Maritime Silk Road. In the future, the port will see strong demand in container logistics services,” said Li Jianhong, Chairman of the Board of China Merchants Holdings (International).

Kumport has good growth prospects, according to COSCO Pacific. The terminal will generate synergies with the Piraeus Container Terminal near Athens, which is also a subsidiary of China COSCO Shipping. Meanwhile, since COSCO Pacific and China Merchants Holdings have accumulated much experience in port investment, management and operation, and maintained good relations with shipping enterprises, the cooperation between the two parties has favorable long-term prospects. The advantageous position of Kumport along the Belt and Road also makes the purchase a lucrative investment.

In April this year, China COSCO Shipping and Greece’s Hellenic Republic Asset Development Fund signed an agreement for the sale of a majority stake in the Piraeus Port Authority in Athens. Piraeus is the largest port in Greece and one of the largest in the Mediterranean Sea basin. In the deal, the Chinese investor will pay 280.5 million euros ($318 million) to the Greek privatization fund for the initial acquisition of a 51-percent stake, while it will pay another 88 million euros ($100 million) within five years for the remaining 16 percent, providing that it implements the agreed investments in the port.

In fact, since 2009, China COSCO Shipping’s subsidiary Piraeus Container Terminal has been operating Piers II and III at the Piraeus Port under a 35-year concession agreement, posting remarkable results. According to statistics provided by China COSCO Shipping, from 2010 to 2015, container throughput at the Piraeus Port soared from 880,000 TEUs to 3.36 million TEUs, boosting its ranking worldwide from 93rd to the 39th.

Greece stands on the important commercial and marine lane of the Suez Canal, facilitating the passage of goods from Asia and Africa to Europe. Located east of the Mediterranean Sea, the Piraeus Port stretches inland into the Balkan region and its maritime transportation radiates across the entire Mediterranean Sea, Black Sea and North Africa. In addition, it’s a deep-water port with year-round access.

“In the past years, due to problems concerning Greece’s economic structure and welfare regime, the port was struggling with high labor costs and saw its throughput dwindling. Besides that, competition from other ports along the Mediterranean coast, such as those in Spain and France, has posed a great challenge,” said Cui Hongjian, Director of the Department for European Studies under the China Institute of International Studies.

Xu believes China COSCO Shipping will actively invest in the infrastructure construction of the Piraeus Port, optimize and integrate the six key business segments including tanker berth, ferry terminal and container wharf, improve its operation capacity in an all-round way, and build it into one of the most advanced ports in Europe.

The signing of the project will also stimulate Chinese investment in maritime tourism, promote the efficiency of land-sea transportation between Asia and Europe, and advance the coordinated development of southeast Europe, and central and north Africa, said Xu. Some multinationals have also cooperated with the Piraeus Container Terminal to distribute their products in the region, such as technology giant HP, and Chinese telecom equipment makers Huawei and ZTE.

However, due to the fragile and weak recovery of the global economy, trade between China and Europe has been on the decline since last year. “Despite the completion of the acquisition, to operate the Piraeus Port well and improve its shipping business, China COSCO Shipping faces risks and challenges,” said Cui, who noted that the company should make an effort to exploit the port’s other areas of industrial potential, besides freight transport.

Cui suggested that China COSCO Shipping should not only operate Piraeus as a cargo terminal or a port of transfer, but also focus on the development of supporting industries, infrastructure construction and even the building of marine fleets.

In March this year, COSCO Pacific and Port of Singapore Authority (PSA) signed a new investment agreement in Shanghai to co-invest in three new mega berths at the Phase 3 and 4 expansion projects of the Pasir Panjang Terminal.

Located at a pivotal international artery, the Port of Singapore has been the shipping center in Southeast Asia and interchange point of marine traffic among Asia, Europe, Africa and Oceania.

The investment will be implemented through a joint venture COSCO-PSA Terminal and allow for the arrival of mega container ships at the new container berths, in preparation for trade growth and growth in the size of container vessels. The new mega berths are expected to become operational from 2017. As PSA has suggested, they will be fully integrated with the company’s infrastructure and supported by the automated and intelligent port technologies.

The joint venture terminal was established as early as 2003, with COSCO Pacific holding a 49-percent stake and PSA 51 percent. The two berths operated by the joint venture at that time have an annual throughput capacity of 1.3 million TEUs.

As global trade drives the rapid development of the container transportation industry, the newly established China COSCO Shipping has seen its fleet being significantly expanded and increasingly felt the urgency to create a global shipping network. At the same time, the large trend of megaton vessels calls for the upgrading of pivotal ports. That explains why COSCO Pacific renewed its investment in the region.

The co-investment agreement is strategically important to both partners and will help them up their competitive game, said Josephine Teo, Singapore’s Senior Minister of State for Finance and Transport, who believes the project will positively contribute to the Belt and Road Initiative.

The investment agreement marks an important step to strengthen our cooperation with international port operators and speed up the global operation of the port industry, China COSCO Shipping told Beijing Review in an e-mail interview.

On one hand, the close partnership between China and Singapore will facilitate trade contacts among Asian countries, reduce dependence on traditional export markets, and push forward economic growth and the transformation of the Asia-Pacific region. On the other hand, it can help the two countries grasp the opportunities brought by the Belt and Road Initiative, further improve the handling capacity of the port, and strengthen the interconnection of sea transportation between Southeast Asian countries and China, according to China COSCO Shipping.

In addition, COSCO Pacific entered a share sale and purchase agreement in May this year with ECT Participations B.V., a subsidiary of Hong Kong-based Hutchison Port Holding Ltd., to acquire a 35-percent equity interest in Euromax Terminal Rotterdam, which is located at the area of Port of Rotterdam in Maasvlakte in the Netherlands.

China COSCO Shipping is prepared to make use of its advantage of overseas resources, constantly improve its global layout, participate in the Belt and Road Initiative and achieve mutually beneficial results with clients, said Xu.

The total fleet of China COSCO Shipping comprises of 1,114 vessels with a capacity of 85.32 million deadweight tons, ranking No.1 in the world.

The company owns over 46 container terminals all across the globe, with over 190 berthing spaces. The combined throughput of its terminals amounts to 90 million 20-foot equivalent units (TEUs), the second largest in the world.

The company highlights the “six plus one” industrial cluster layout. The six clusters are shipping, logistics, finance, equipment manufacturing, shipping services and social services, while the one refers to Internet Plus based on business model innovation.

Previous 2 mins Panic in the sky Flames took hold of a Boeing 777 forcing it to make an emergency landing in Singapore. All passengers and crew escaped without injury
Next عبور 47 سفينة قناة السويس بحمولة 2.5 مليون طن