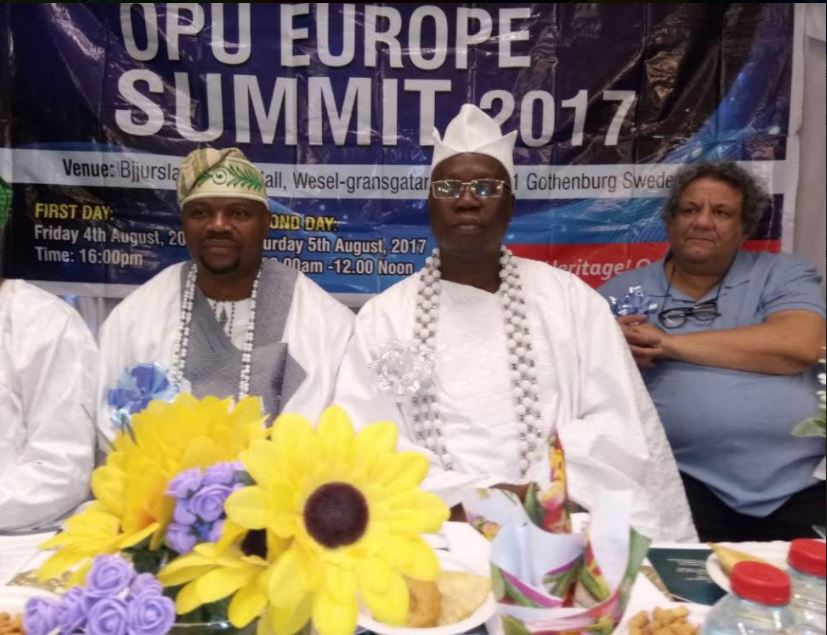 In his address, Adams, who earlier in the week went into seclusion ahead of the inauguration, thanked the Alaafin of Oyo, Oba Lamidi Adeyemi for finding him worthy of the exalted position.

His full speech below:

“There cannot be a more humbling occasion for me as the one we are in today.
Against the backdrop of the size of the office the Iku Baba Yeye, His Imperial Majesty, the Alaafin of Oyo, Oba Lamidi Olayiwola Atanda Adeyemi III, has bestowed on me and the larger than life image of my predecessors, my installation as the 15th Aare Ona Kakanfo is a challenge that has made all past challenges seem like a child’s play.

Though I am just stepping into the office, past occupants of the seat, especially the 13th and 14th occupants – Aare Samuel Ladoke Akintola and Aare Moshood Kashimawo Olawale Abiola – brought so much power and glamour to the office that it is obvious I have a lot of work to do. As astute businessmen and politicians of note, they raised the profile of the office.

There is no doubt from the reactions that followed my pronouncement by the Alaafin of Oyo as the 15th Aare Ona Kakanfo that the power and prestige of the office has not waned since it was created centuries ago by Alaafin Ajagbo.

In fact, the epoch-making event of today is symbolic as 2018 marks the 558th anniversary of the installation of the first Aare Ona Kakanfo – Kokoro Gangan of Iwoye.

It is of interest to note that the military, political, traditional and cultural symbolism of the title to the Yoruba Empire, about 600 years ago, is still of strategic importance in the 21st Century.

This attribute reveals the uniqueness of the Yoruba race and shows that so much is still expected of the occupant of the post, despite the fact that physical and armed wars are no longer the order of the day.

In fact, despite the fact that I am an holder of 52 traditional titles, none has drawn as much comments and commendation by way of letters and visits.

The import of the Office still stands: protection of the interests of Yoruba race, both within the country and everywhere else people of the race exist.

While it is estimated that there are 60 million Yoruba within Nigeria and about 200 million others scattered all over the world, as a starting point, the preservation of the culture of the race will occupy my attention.

Pitiably, as a race, we are gradually losing our culture. In fact, from my travels around the world, it has become obvious that people of other races are taking more interest in our culture than we the owners of the culture, with Americans, Europeans and Asians now earning Degrees in the study of our culture, beliefs and what they have come to term Doctrine. We need to preserve our culture to fully realize the potential of the Yoruba.

Though with an activist background, it is now clear that I have to do more as a bridge builder with this new responsibility.

In as much as the focus of my struggle has changed over the years from the heady days of the Oodua People’s Congress (OPC) to the spread of our culture through the formation of the Oodua Progressive Union (OPU), which is now in 79 countries, the Olokun Festival Foundation, Gani Adams Foundation and many others, this new responsibility, despite my age, has unwittingly forced the stature of a statesman on me.

I promise to live up to that calling.

In this regard, I will work with our traditional rulers, grassroots leaders and have good rapport with all stakeholders, no matter the differences of the past, for the unity, progress and advancement of Yorubaland and Nigeria.

The office of the Aare Ona Kakanfo will project the Yoruba culture and tradition by promoting and sustaining our identity globally.

The office will equally ensure unity of all Yoruba sons and daughters all over the world.

Also of strategic importance to me is research and documentary to sustain the ideals of our founding fathers.

To ensure the continuation of the leadership role the Yoruba is known for educationally, I will give scholarships to our sons and daughters because education is light and power.

Also, I will collaborate with security agencies and stakeholders to ensure that Yorubaland is effectively secured through our various organizations.

I want to assure this August gathering that given the fact that the Oodua Progressives Union (OPU), which I am also the Convener, is now established in 79 countries, I will use this Union and other pan-Yoruba groups abroad to invite our sons and daughters with exceptional abilities, who have distinguished themselves in various fields, to come home and help in our quest to ensuring that our country takes its rightful place in the comity of nations.

GRATITUDE
At this juncture, let me express my profound gratitude to all our revered traditional rulers who have been working tirelessly to unite our race. It is a long list that it will not be possible to mention all.

But let me use the following to pay tribute to our traditional rulers: the Alaafin of Oyo, Iku Baba Yeye, Oba Lamidi Olayiwola Adeyemi III who has deemed it fit to honour me with this prestigious title, the Ooni of Ife, Oonirisa Enitan Adeyeye Ogunwusi, Ojaja II; Chairmen of Council of Obas and Chiefs and all traditional rulers in Yorubaland, and not forgetting my root, the Zaki of Arigidi-Akoko, Oba Yisa Olanipekun, and all traditional rulers in Akokoland; all the Obas who bestowed me with 52 titles, which invariably laid the foundation for my emergence as the Aare Ona Kakanfo.

CALL FOR UNITY
The journey has started from here. And my first appeal goes to Yoruba sons and daughters who are outside the shores of the country not to forget that there is no place like home. This was what informed the formation of the Oodua Progressives Union (OPU), Gani Adams Foundation and Olokun Festival Foundation. Please, see Yorubaland as the place to be. Don’t give the race a bad name. Come home to invest.

As the 15th Aare Ona Kakanafo, I consider myself lucky that there is no war at hand confronting the Yoruba race now. In other words, we are living in peace time. However, I am not pleased with the level of Yoruba unity today and I am very concerned. Therefore, my greatest priority is the unity of the Yoruba race at home and in the Diaspora.

I will, therefore, spare no effort in ensuring the unity of Yoruba race within the contemporary Nigeria body polity.

Since we are now in the era of Information Technology, we will be unveiling historical documents obtained from the Iku Baba Yeye on the Aare Ona Kakanfo title to a website.

2018 makes it the 30th year that the last holder of the title, Aare M.K.O. Abiola, stood before you for his installation. He died on July 7, 1998 and the post was vacant for almost 20 years.

So, apart from setting aside the myth and projecting the image of the office, documenting the Aare Ona Kakanfo title will also let people know that a child born of humble beginning like me can make it.

From the extreme North of Yorubaland, Arigidi-Akoko in Akoko North West Local Government the rural area of Ondo State, here I am emerging as the Aare Ona Kakanfo.

WAY FORWARD
My second appeal as the Aare Ona Kakanfo goes to the Federal Government to attend to some of the major roads in Yorubaland that are critical to its citizens. These include Lagos-Ibadan, Oyo-Ilorin, Lagos-Badagry, Sagamu-Benin, Badagry-Lusada-Sokoto, Ibadan-Iwo-Osogbo, Osogbo-Ilesa, Ilesa-Akure-Owo-Lokoja and Lagos-Abeokuta.

It will also be a major plus if the government, as promised by President Muhammadu Buhari in his January 1, 2018 speech, attends to rail transportation as fast as possible.

The issue of power is also critical. This will empower artisans more.

Security is equally important. All these would aid the development of the tourism potential of the country.

I want to assure you that I will work with various stakeholders to turn our land into a viable tourist destination.

To our esteemed Governors in the South-West, I call for cooperation, no matter the party line. The Development Agenda for Western Nigeria (DAWN) Commission should be empowered. And I want you all to see me as a partner in progress.

I offer myself for service once it is for the advancement of the Yoruba race. The various groups in the South-West should also resolve their crises.

I will also persuade seven of our elders, who are not partisan, to work with me in uniting all Yoruba and resolve differences wherever they may arise.

PROFOUND APPRECIATION
In closing, let me express my profound appreciation to the Commander-in-Chief of the Armed Forces, President Muhammadu Buhari, Vice President Yemi Osinbajo, Senate President, Dr. Bukola Saraki and the Speaker of the House of Representatives, Rt. Hon. Yakubu Dogara, for their support.

I want to thank our host Governor, Senator Abiola Ajimobi, for his immense contribution towards the success of today’s event.

I also thank other governors for their support and contributions, financially and morally.

Let me thank all those who contributed to the success of this installation ceremony, especially members of the Planning Committee, the media and many others too numerous to mention.
I also want to thank my wife, Erelu Mojisola. She is a Pillar of Support and a Role Model for Women.

I want to assure all that as the 15th Aare Ona Kakanfo, I will use my position, God willing, to protect the interest of our land and our dear country Nigeria.