Post quarter-end, successfully chartered the last newbuilding on order without a long-term charter contract to Total Gas & Power Chartering Limited (“Total”) for a period of seven years, commencing in 2018, at attractive rates.

Delivery of the GasLog Glasgow on June 30, 2016 and the commencement of its ten-year charter to a subsidiary of BG Group plc. (“BG Group”), now owned by Royal Dutch Shell plc (“Shell”).

Post quarter-end, executed debt refinancing of $1.05 billion with a number of international banks, extending the maturity of six existing credit facilities to 2021. 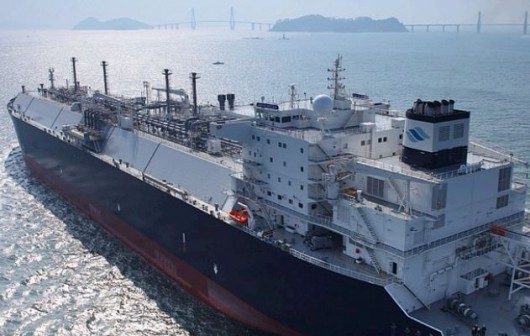 (2) EBITDA, Adjusted EBITDA, Adjusted Profit and Adjusted Earnings/Loss per share (“EPS”) are non-GAAP financial measures, and should not be used in isolation or as a substitute for GasLog’s financial results presented in accordance with International Financial Reporting Standards (“IFRS”). For definition and reconciliation of these measures to the most directly comparable financial measures calculated and presented in accordance with IFRS, please refer to Exhibit II at the end of this press release.

Paul Wogan, Chief Executive Officer, stated: “At the end of the quarter, we took delivery of the GasLog Glasgow. This vessel has a ten-year contract with a subsidiary of Shell and is one of eight vessels with multi-year contracts being delivered between 2016 and 2019. Post quarter-end, we were very pleased to announce the fixture of Hull 2801, GasLog’s only remaining open newbuild, to a subsidiary of Total for a minimum of seven years, which meets our objective of broadening GasLog’s long-term customer base.

Whilst the short-term LNG shipping market remains challenging, in recent weeks we have seen increased utilization and improved charter terms such as round-trip economics. With less available tonnage, charterers at times have had to pay increased rates to secure vessels.”

(3) EBITDA, which represents earnings before interest income and expense, gain/loss on interest rate swaps, taxes, depreciation and amortization, is a non-GAAP financial measure. Please refer to Exhibit II at the end of this press release for guidance on the underlying assumptions used to derive EBITDA.

On June 27, 2016, GasLog completed the issuance of NOK 750 million (equivalent to $90.2 million) of new senior unsecured bonds in the Norwegian bond market. The bonds will mature in May 2021 and have a coupon of 6.9% over 3 month NIBOR. The proceeds from the issuance were used to partly refinance GasLog’s existing bonds maturing in June 2018. Simultaneously with the aforementioned bond issuance, GasLog re-purchased and cancelled GasLog’s NOK 588 million of bonds from a total NOK 1 billion of bonds issued in June 27, 2013 and May 2, 2014 at a price of 103% of par value.

In addition, GasLog entered into three cross currency swaps (“CCSs”) to exchange interest payments and principal on maturity on the same terms as the NOK 750 million bonds, terminated three of its existing CCSs and decreased the notional amount of its remaining three CCSs to mirror the remaining NOK 412 million of bonds maturing in June 2018.

Delivery of the GasLog Glasgow

On June 30, 2016, GasLog took delivery of the GasLog Glasgow, an LNG carrier of 174,000 cubic meters capacity with tri-fuel diesel electric propulsion constructed by Samsung Heavy Industries Co. Ltd. (“Samsung”). The vessel is chartered out to Methane Services Limited (“MSL”), a subsidiary of BG Group, now owned by Shell, from its delivery until 2026, with an option for the charterer to extend the terms of the charter at specified rates.

On July 11, 2016, GasLog entered a time charter party agreement with Total to charter Hull No. 2801 for a period of seven years, commencing in mid-2018 at a date to be finalized ahead of the commencement of the charter. A further option period of three years has been granted at the charterer’s option. The vessel is currently under construction at Hyundai Heavy Industries Co., Ltd. (“Hyundai”) in South Korea and is due to be delivered in 2018.

On July 18, 2016, the Group terminated interest rate swap agreements with an aggregate notional value of $874.9 million, associated with the six legacy facilities being re-financed by the Legacy Facility Re-financing. Concomitantly, GasLog entered into new interest rate swap agreements with a notional value of $870.0 million in aggregate, maturing between 2020 and 2022.

In June 2016, Graham Westgarth, GasLog’s Chief Operating Officer (“COO”) informed the board of directors of his intention to retire as of May 2017. We anticipate that Mr. Westgarth will be nominated, following his retirement, to serve on the GasLog Board as part of the 2017 Annual General Meeting. By the time of his retirement Mr. Westgarth will have been at GasLog for over four years in his role as COO and has been instrumental in supporting the growth of the business over that time, with a prime focus on the continuation of GasLog’s exceptional safety record and safe effective delivery of its newbuilds. Mr. Westgarth has worked in the global shipping industry in various roles for over forty years, and for five of those years also served as Chairman of INTERTANKO. A search for Mr. Westgarth’s successor is well underway and the retirement date of May 2017 ensures a prudent handover period.

On August 1, 2016, GasLog Partners announced that it has priced its public offering of 2,750,000 common units at a price to the public of $19.50 per common unit. The Partnership plans to use the net proceeds from the public offering for general partnership purposes, which may include future acquisitions, debt repayment, capital expenditures and additions to working capital. We estimate that the gross proceeds from this offering will be $53.6 million (excluding $1.1 million from the sale of the general partner units to GasLog to maintain its 2.0% interest in the Partnership).

Profit was $3.3 million for the quarter ended June 30, 2016 ($16.7 million profit for the quarter ended June 30, 2015). This decrease in profit is mainly attributable to four factors: the increased loss on swaps derived from the movement in the fair value of interest rate swaps carried at fair value through profit or loss; the recycling of accumulated loss from equity to the statement of profit or loss related to the CCS agreements that were terminated or modified in June 2016; the increased financial costs derived mainly from the write-off of unamortized bond fees; and the premium as a result of the bond re-purchase. These factors were partially offset by a net increase in profit from operations resulting mainly from the increase in operating days mitigated by a lower daily hire rate affected by the vessels operating in the spot market.

Revenues were $114.5 million for the quarter ended June 30, 2016 ($104.4 million for the quarter ended June 30, 2015). The increase was mainly driven by the new deliveries in our fleet (GasLog Salem, GasLog Greece, GasLog Glasgow) and fewer off-hire days due to drydockings (one drydocking in the second quarter of 2016 as opposed to four for the same period in 2015).

GasLog’s contracted charter revenues are estimated to increase from $412.5 million for the fiscal year 2015 to $482.9 million for the fiscal year 2017, based on contracts in effect as of June 30, 2016, without including any extension options. As of June 30, 2016, giving effect to the recently signed agreement with Total, the total future firm contracted revenue stood at $3.65 billion (1), including the eight vessels owned by GasLog Partners but excluding the vessels operating in the spot market.

(1) Contracted revenue calculations assume: (a) 365 revenue days per annum, with 30 off-hire days when the ship undergoes scheduled drydocking; (b) all LNG carriers on order are delivered on schedule; and (c) no exercise of any option to extend the terms of charters.

As of June 30, 2016, GasLog had $192.6 million of cash and cash equivalents, of which $56.3 million was held in time deposits and the remaining balance in current accounts. As of June 30, 2016, GasLog had $25.1 million in restricted cash in relation to cash held in blocked accounts mainly in order to comply with the covenants under two of its credit facilities, $23.5 million of which was reclassified from restricted cash to cash and cash equivalents following the completion of the Legacy Facility Re-financing in July 2016.

As of June 30, 2016, GasLog had an aggregate of $2.4 billion of indebtedness outstanding under its credit facilities and bond agreements, of which $179.4 million was repayable within one year, and a $220.8 million finance lease liability related to the sale and leaseback of the Methane Julia Louise.

As of June 30, 2016, there was undrawn availability of $1.0 billion under the debt financing agreement entered into on October 16, 2015 with 14 international banks to partially finance the delivery of our six remaining newbuildings expected to be delivered in 2016, 2018 and 2019.

As of June 30, 2016, GasLog’s commitments for capital expenditures are related to the six LNG carriers on order, which have a gross aggregate contract price of approximately $1.23 billion. As of June 30, 2016, the total remaining balance of the contract prices of the six newbuildings was $1.1 billion that GasLog expects to be funded with the $1.0 billion undrawn amount under the financing agreement entered into on October 16, 2015, as well as cash balances and cash from operations.

GasLog has hedged 38.9% of its expected floating interest rate exposure on its outstanding debt (including the finance lease liability) at a weighted average interest rate of approximately 4.7% (including margin) as of June 30, 2016.

Our demand outlook for LNG carriers with long-term charters remains positive. On July 11, 2016, we announced a new seven-year time charter with Total at a rate that is consistent with GasLog’s long-term charter rates, demonstrating the resilience of long-term rates against the volatility of the shorter-term market. We continue to see a number of tenders for multi-year charters for vessels, which will be used to transport volumes from new liquefaction facilities coming online over the coming years.

In the second quarter, there were several announcements highlighting the ongoing demand for LNG carriers. In May, PETRONAS’ floating liquefied natural gas (“FLNG”) facility was delivered for operation in Malaysia. The facility is the first of a number of FLNG projects that are scheduled to come online in the next few years. In June, Kinder Morgan received Federal Energy Regulatory Commission (“FERC”) approval for its Elba Island project (“Elba Island”). The 2.5 million tonnes per annum (“mtpa”) project is expected to come online in 2018 and is supported by a 20-year contract with Shell for 100% of the liquefaction capacity. Elba Island is one of several liquefaction projects that has not taken final investment decision (“FID”), but continues to make progress in the current commodity price environment. However, there have been other liquefaction projects, where timing of FID has been pushed back, such as Shell’s Lake Charles project.

The expanded Panama Canal also was completed in June 2016 and has seen a number of vessel transits since completion. The opening of the expanded canal, which accommodates larger vessels including LNG carriers, should stimulate increased LNG trading activity between the Pacific and Atlantic basins due to greater destination optionality. On July 25, 2016, the first ever LNG carrier transit went through the expanded canal as the Maran Gas Apollonia, which is on charter to Shell, entered the locks on the Atlantic side carrying a cargo from the US Gulf Coast to Asia. Three more LNG transits have been booked in the next month.

New liquefaction projects representing approximately 140 million tonnes per annum of capacity have taken FID and are scheduled to come online between now and 2020. On the demand side, there have been sizeable year-on-year increases in import volumes from many new and existing nations looking to take advantage of low cost LNG. For example, for the six months to June 30, 2016, China and India have imported 29% and 45% more LNG, respectively, versus the same period in 2015. New importers such as Jordan, Egypt, Pakistan, and Lithuania have seen imports rise significantly in 2016 through the use of floating storage re-gasification units (“FSRUs”), which are typically quicker to market and offer greater flexibility than land-based terminals. We expect FSRUs to create additional demand in both new and existing markets for the new LNG coming online.

In the shorter term market, spot market rates through 2016 have plateaued around multi-year lows. Whilst it is too early to predict a sustained increase in the spot market, there has been a marked uptick in spot charter terms in recent weeks, with slightly improved freight rates and the ability to achieve round-trip economics on a more frequent basis.