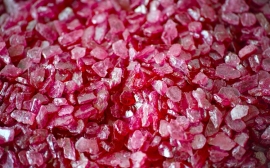 Gemfields plc reports record auction revenues of $44.3 million from a sale of rough ruby from the Montepuez mine in Mozambique. The June 13-19 auction in Singapore is the last auction the miner has planned for this financial year. The average realized price of the goods sold was $29.21 per carat, with 1,516,459 carats sold – 95% by weight and 98% by value – out of a total of 1,601,145 carats offered.

The six auctions of goods from Montepuez held since June 2014 have generated a total of $195.1 million in revenues.The auction offered high and commercial grade rough rubies, both treated and untreated. All treated lots were offered using industry accepted treatment techniques and on a fully disclosed basis, Gemfields reported. The miner said it provided goods for sale according to requirements supplied by customers which was seen in the fact that it sold 71 of the 75 lots offered. Ian Harebottle, CEO of Gemfields, said the company will launch a new global marketing campaign focusing on Mozambican rubies in London on June 22.