Getting Encapsulated: What does it mean to stay in a pod hotel? 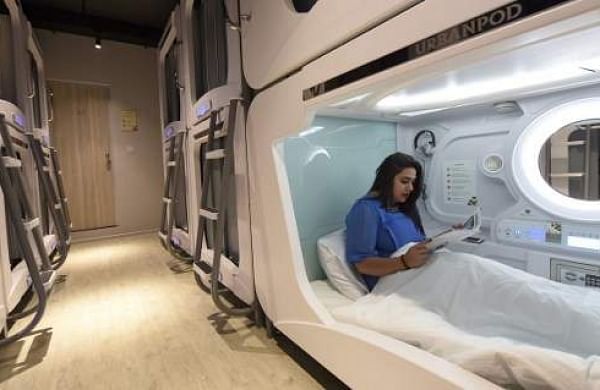 MUMBAI: The concept of a dormitory was aimed at accommodating guests who just wanted a place to sleep. However, a new concept called capsule hotels or pod hotels has started to gain popularity across the world. A pod hotel tends to strip a hotel room of all the superfluous facilities and compresses it down to space for a single person’s use.

The idea took shape way back in the late 1970s and even as the rest of the world started to adapt it gradually, India’s first pod hotel commenced operations in Mumbai last month. Here’s a look at what exactly is a pod hotel and how does it look in different parts of the world.

What is a pod hotel?

The idea of a pod hotel or a capsule hotel began in Osaka, Japan. It features a large number of small rooms in the form of capsules aimed at a cheap overnight accommodation.

Which is the first pod hotel?

The first pod known as the Capsule Inn Osaka was designed by leading Japanese architect Kisho Kurokawa in 1979. It is located in the Umeda district of Osaka in Japan. Kurokawa was also a founder of the Metabolist Movement, a trend which aesthetically fused mega-structures with organic biological growth.

How did the rest of the world adopt it?

2015: Philippines opens a capsule hotel at Terminal 3 of the Ninoy Aquino International Airport in Metro Manila for transit passengers

What all facilities do the pod hotels have?

Most pod hotels include a free wi-fi connection, television, and air conditioning apart from the basic facilities of a mattress and pillow. The pods usually measure close to two metre by one metre by 1.25 metre. The concept has gained popularity in Japan and is catching up slowly across the world. In Japan, a pod hotel can cost up to $30 a night. Some pod hotels offer separate sections for men and women.

Does India have a pod hotel?

Where is it located?

“Urbanpod” stands right opposite to Santacruz Electronics Export Processing Zone (SEEPZ) in Andheri, the IT hub of the city— the location providing a clear picture about the target customer.

Who are the founders?

The Urbanpod hotel was founded by entrepreneurs Hiren Gandhi and Shalabh Mittal. It commenced operations on March 1, 2017.

What are the facilities offered?

The pods look like the capsules shown in sci-fi movies. It consists of a bed with hangers, mirror, small TV with headphones, locker to keep personal valuables, facilities for charging electronic gadgets, air purifier, lighting and air conditioning. The pod measures about seven feet by four feet with a height of three feet. Facility for storage is provided separately to keep luggage, clothes, and shoes. Collapsible doors provide for the privacy. All the pods are provided with fire-fighting equipment.

How many customers has it served so far?

In 40 days that the Urbanpod has been operating in Mumbai, it has catered to 100-plus customers.

Who designed these pods?

The pods at Urbanpod have been designed by Frameworkz – the architectural and interior designing firm from Singapore.

How many types of pods are available here?

There are four types of pods according to the company’s website—Classic pods, Private Pods, Suite, and Ladies only pods.

What are the charges?

Classic pods at the UrbanPod cost Rs 1800 at the minimum while the private pods can be availed for just over Rs 2500 and Suit Pods come at around Rs 4000. Women only pods are charged just like the classic pods. The prices may vary depending upon the rush.

In Mumbai, space is very expensive and there are several people who come here on one-two day business trips. Hence, we launched our project here. Bangalore and Delhi are next on our agenda. We have been able to offer them best of the services at 20 to 30 percent lower cost. Young entrepreneurs on business trips don’t need extravagant lobbies and lounges. So we have done away with that cost
Hiren Gandhi

Here are some pod hotels across the world

1. Anshin Oyado, Japan: The inside of the hotel and capsule rooms are fully equipped with Wi-Fi and artificial hot spring and internet café can be used at all times. The accommodation charge starts from 5,480 yen, and a guest can stay up to 21 hours if checked in at 3:00 p.m. With regard to the security aspect, lockers with the latest vein authentication system are installed for storing valuables and the room access management using auto lock is done at each floor.

2. Book and Bed, Tokyo: Book and Bed is “an accommodation bookshop”. There are little spread rooms of 120 cm x 200 cm with up to 28 beds. Smaller rooms measure 80 cm × 200 cm, up to six beds. There are thousands of books and the capsule rooms are placed within the bookshelves.

3. CityHub, Amsterdam: The hubs have Dutch power plugs and USB-plugs, but no international power plugs. There is WiFi in the cabin. There is air ventilation and air conditioning. A guest can change the lighting into millions of colors. There is Bluetooth music streaming as well.

4. Capsule by Container, Malaysia: There are a total of 120 capsules with female-only and male changing rooms available on each floor. Upon check-in, each guest is given an access card, locker’s key, and a towel in an amenity bag. The size of each locker is 30x23x15 cm. Slippers are provided for indoor use while shoe cabinets are also present for storage.

5. Cabana, Japan: The size of the capsule rooms are 207 cm (length), 105 cm (width) and 105 cm (height)—a bit larger than that of regular capsule rooms in Japan as claimed by the company. Get changed into blue pants that are provided for the guests. The hotel provides locker facilities with an option of keeping additional belongings at the reception.

Previous Duterte to ASEAN Leaders: Be ‘Resolute in Realizing a Drug-Free ASEAN’
Next 「Zepp」アジア各地でライブホール展開へ クールジャパン機構の出資も決定