Global container throughput is expected to grow by only 0.3% this year, as the weak volume growth recorded in the first half of 2016 dragged full year volume projections down. This year is expected to yield the second lowest annual growth rate since 2009, when a record year-on-year decline saw global container volumes shrink by -8.3% in the aftermaths of the Lehman Bros failure.

Total throughput at the world’s top 30 container ports is estimated to have grown by only 0.2% in the first six months of the year, with weak growth recorded across all main regions. The top 30 ports currently account for over half of the global container throughput, with aggregated volumes reaching 184.57 Mteu during the first half of the year, compared to 184.28 Mteu in the same period of 2015. 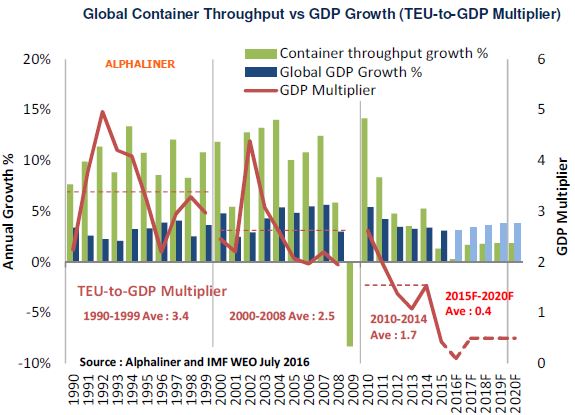 Among the gainers, container volume growth was uneven. Algeciras in Spain reported the largest percentagewise increase of 13.1% to 2.35 Mteu, followed by Malaysia’s Port Kelang (up 12.3%) and Sri Lanka’s Colombo (up 11.2%).