Global stocks, dollar and oil cool ahead of Doha meeting 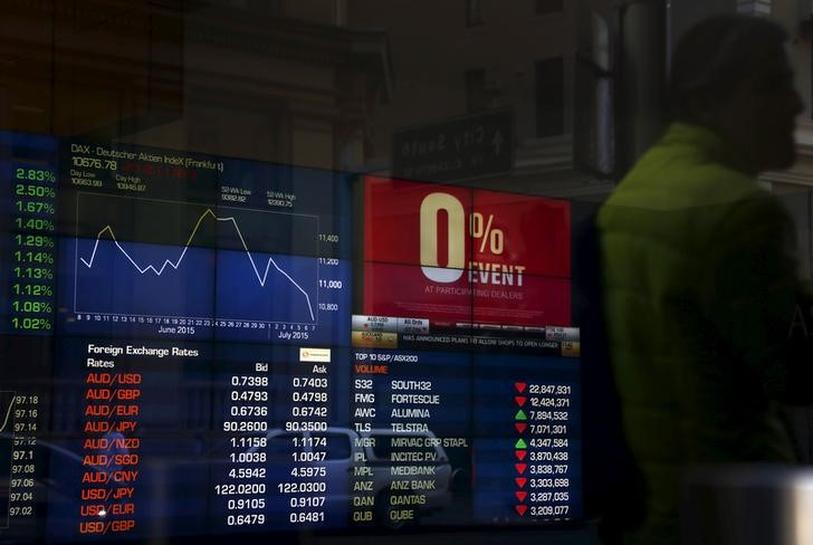 An investor is reflected in a window as he looks at boards displaying stock prices and an advertisement for zero percent interest rate for purchasing a car at the Australian Securities Exchange in central Sydney, Australia, July 8, 2015.

Moves in most markets were small in Europe as investors eased back after a 2.5 percent weekly rally in world shares, a upward turn in the dollar and an 11 percent surge in oil prices this month.

Data from China drew approval as it showed the country’s giant economy grew at 6.7 percent in the first quarter year-on-year, bolstering the view its slowdown may be bottoming out.

The major currencies seen as most dependent on China were the main gainers. The Australian and New Zealand dollars rose 0.3 and 0.9 percent respectively, also helped by the week’s gains in key commodity prices.

The U.S. dollar was starting to ease back on the pedal again too, having made more than 1 percent against both the yen and the euro this week.

Traders were waiting for IMF and G20 meetings in Washington later for signs from financial leaders on the next stages of their efforts to drag most of the developed world out of a debilitating cycle of debt and very low inflation.

Speculation was also still circling about whether top oil producers led by Saudi Arabia and Russia will be able to hammer a deal in Doha, Qatar on Sunday to curb output which is currently churning out around 2 million barrels of excess oil a day.

“This week we had some interesting movements especially in euro/dollar and dollar/yen and a widespread rebound in market sentiment,” said Rabobank economist Philip Marey, adding Thursday’s surprise move by Singapore’s central bank to ease policy had fuelled hopes of another round of global stimulus.

The temptation to lock in profits was proving strong.

European shares edged down 0.4 percent as traders top-sliced some the 3.5 percent gains they have made this week.

Greek bond yields were set to record their biggest weekly rise in two months as investors start to fret about delays to Athens’ bailout package and over the extent to which the IMF will participate in a new deal.

The head of IMF, Christine Lagarde had reiterated on Thursday the euro zone needed to write off some of Athens’ debt and rework plans to get the country back on track.

In a sign of re-emerging risk appetite, the Baltic Dry index which reflects global shipping and trade and seen as somewhat of a bellwether of the global economy, was on course for a ninth straight weekly rise, its best run since 2003.

“Chinese economic data is showing signs of stabilisation, including recent PMI numbers, as well as the latest figures on industrial production and retail sales,” said Suan Teck Kin, economist at the United Overseas Bank in Singapore.

Japan’s Nikkei, one of the biggest losers of the 2016 so far, closed down 0.3 percent on the day but 6.5 percent higher for the week following the drop back in the yen.

MSCI’s broadest index of Asia-Pacific shares outside Japan crept up 0.1 percent. That index has gained about 3.6 percent on the week during which it hit a five-month high, helped by a slight thaw in pessimism over the Chinese economy and an earlier surge in crude oil prices.

It is part of a global rise. Both the MSCI All World index and the S&P 500 have hit their highest points of the year this week.

Safe-haven gold was on course for a weekly loss, while sterling was steady and up slightly on the week at $1.4155 as it moved away from a low of $1.4091 hit after Bank of England policymakers voted unanimously to keep interest rates at a record low of 0.5 percent.

Previous Saudis back embattled Malaysia PM on huge payment
Next China: They're just not that into us any more