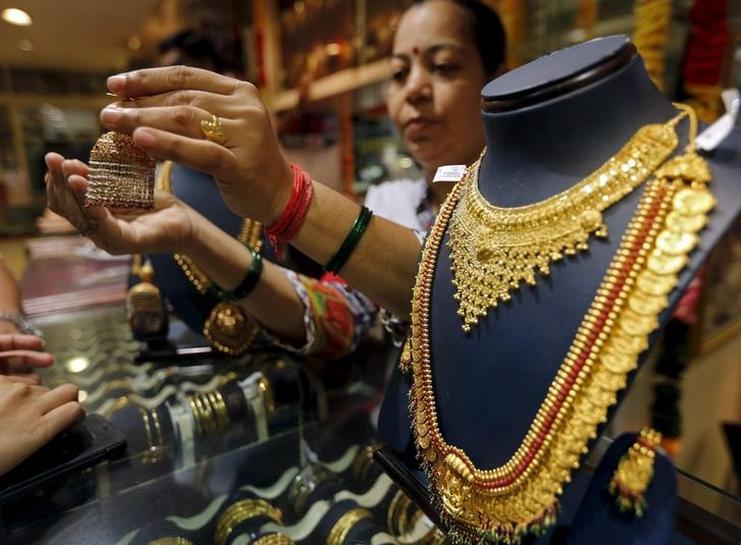 A saleswoman shows a gold earring to customers at a jewellery showroom in Mumbai, India, July 21, 2015.

SINGAPORE Gold jumped to a three-week peak on Tuesday on expectations the Federal Reserve will not raise U.S. interest rates soon and as the dollar traded close to its lowest in nearly eight months, though profit-taking chipped away at some recent gains.

The U.S. currency has been on the back foot since Fed Chair Janet Yellen last month doused expectations for hikes in U.S. interest rates anytime soon, making dollar-priced commodities cheaper.

“While policy uncertainty is supportive of gold, it is the currency markets that we look to, to wield the biggest influence on bullion,” HSBC said in a note.

The dollar remained on the defensive on Tuesday after slumping overnight to its lowest since August against a basket of major currencies and a 17-month low against the Japanese yen.

The dollar index has shed nearly 3 percent after recent dovish comments by Yellen.

Scaled-back expectations for further monetary tightening this year helped gold to its best quarter in nearly 30 years in the three months to March, after the U.S. central bank raised rates in December for the first time in nearly a decade.

Gold has also been buoyed by some safe-haven demand. Weak economic data and uncertainty over U.S. monetary policy has contributed to risk aversion, boosting investor appetite for bullion and other assets perceived as safer stores of value, including the Japanese yen.

In the near term, gold’s rally could be capped following recent sharp gains.

“We expect profit-taking in gold at these levels with $1,250 to be supported,” said MKS Group trader Jason Cerisola.

Some selling was seen in other precious metals as well on Tuesday.

Platinum eased as much 0.6 percent following a 2-percent jump overnight. Palladium was steady at $545.75 an ounce.

(Reporting by A. Ananthalakshmi; Editing by Joseph Radford)

Previous Delta Air Lines coy on intentions toward Virgin Australia
Next No airline could make money out of it: Air New Zealand savages runway extension