Gold edges up ahead of Fed on softer dollar, weak U.S. data

SINGAPORE Gold ticked higher for a third straight session on Wednesday on a softer dollar and weak U.S. economic data, but the metal traded in a tight range as investors waited for the Federal Reserve’s policy decision later in the session.

The dollar extended losses against a basket of major currencies as investors believed the weakness in the U.S. economy would prompt the Fed to be cautious about raising rates.

The Fed is likely to keep rates steady later on Wednesday, and the focus rests squarely on the tone of its statement and any timing for an eventual rate hike. The U.S. central bank raised rates in December for the first time in nearly a decade.

“An unchanged economic outlook and a more balanced assessment of the risks should enhance the Fed’s confidence to proceed with further normalisation,” they said.

OCBC Bank said the Fed “could strike a careful balance between calling for gradual policy normalisation and making sense of the recent spate of mixed economic data amid slightly stronger crude oil prices.”

Gold is highly sensitive to rising rates, which lift the opportunity cost of holding non-yielding bullion, while boosting the dollar, in which it is priced. 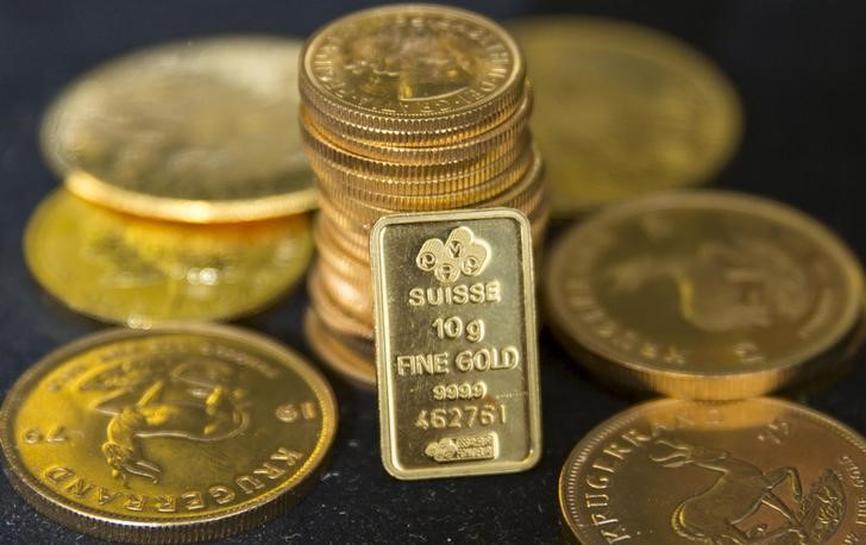 It has rallied 17 percent this year on speculation that the Fed may not raise rates this year amid uncertainty over the global economy.

Data on Tuesday showed orders for long-lasting U.S. manufactured goods rebounded far less than expected in March, implying that business spending and economic growth were weak in the first quarter. Another report showed an ebb in consumer confidence in April.

Gold prices that hit a 13-month high last month are likely to fall back in the short term because of a slump in demand from key Asian consumers, GFMS analysts at Thomson Reuters said in a report on Tuesday.

Global gold demand tumbled by 24 percent year on year to 781 tonnes in the first three months of the year, its weakest quarter in seven years, GFMS said.

(Reporting by A. Ananthalakshmi; Editing by Richard Pullin and Subhranshu Sahu)