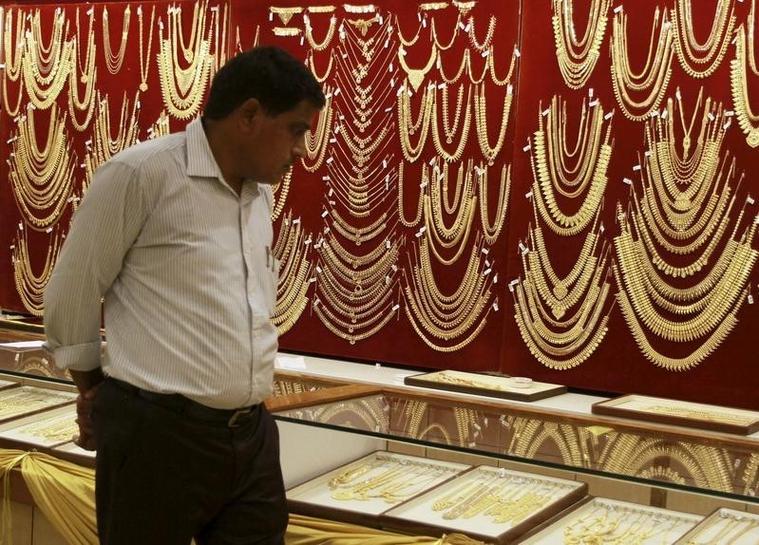 A customer looks at gold ornaments on display inside a jewelry showroom on the occasion of Akshaya Tritiya, a major gold buying festival, in Kochi April 21, 2015.

NEW YORK/LONDON Gold steadied on Wednesday as a firmer tone to the U.S. dollar held gains in check, though silver extended gains to an 11-month peak, boosted by technical momentum and perceptions it is undervalued versus gold.

Silver prices have climbed 11 percent so far this month, helped by a break through chart resistance at its late October high on Tuesday, and is on track for its biggest monthly rise since June 2014.

“It needs a clearer indication of central bank policy and some other demand indicator,” said Rob Haworth, senior investment strategist for U.S. Bank Wealth Management in Seattle, about the quiet gold market, noting upcoming meetings with the European Central Bank (ECB) and Bank of Japan.

“We don’t think we see a greater move to negative interest rate policy. It hurts the bullish case for gold at this point.”

The ECB is not expected to make any policy change at its rate-setting meeting on Thursday.

The gold/silver ratio, which measures the number of silver ounces needed to buy an ounce of gold, hit its lowest in nearly six months at 73.1.

“If you look at the long-term outlook for the gold/silver ratio, it can go a lot lower. That would mean that if you’re optimistic on gold prices, silver can go a lot higher,” ABN Amro analyst Georgette Boele said.

Silver exchange-traded funds tracked by Reuters, which have attracted inflows of more than 1,200 tonnes since early March, rose another 38 tonnes <0#ETFHLD=XAG> on Tuesday, when prices surged 4.4 percent.

“Sentiment towards precious metals, particularly towards gold and silver, has been quite good both in the futures market and the ETF market, and that should help build a floor underneath prices.”

(Additional reporting by A. Ananthalakshmi in Singapore; editing by David Evans and Chizu Nomiyama)