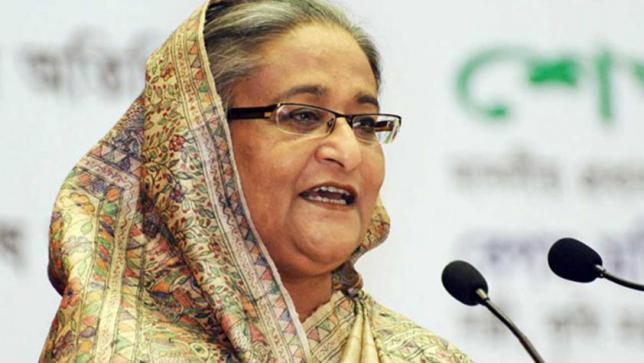 “I would like to assure you that our government’s cooperation would continue to create a business friendly environment for developing private sector through a transparent management,” she told an international visionary conference on economy in Dhaka today.

Dhaka Chamber of Commerce and Industry (DCCI) organised the daylong conference titled “New Economic Thinking: Bangladesh 2030 and Beyond” at a city hotel.

“We have set up PPP office for infrastructure development and drafted time-befitting industrial and export polices for public and private investment along with initiatives to ensure infrastructure facilities,” she said.

The premier said a high-tech park on 355 acres of land is being constructed at Kaliakoir with a target of employing 10 lakh people in the IT sector by 2021 and exporting goods of 5 billion dollars a year.

Sheikh Hasina also called upon all to work together for further advancement of the country by remaining above personal and vested interest.

“This is the country of ours … we have to take the country towards advancement working together and remaining above personal and vested interest. Let’s come and work for our country to build a hunger and poverty-free ‘Sonar Bangla’ as dreamt by the Father of the Nation,” she said.

“I have a firm belief that we could achieve the goal,” she added.

In this connection, the prime minister quoted a speech of the Father of the Nation with regard to economic development.

In an address to the nation on December 15 in 1974, Bangabandhu said: “The 16th December 1971 is the end of our political independence struggle and the beginning the war of economic freedom. This is a ‘do or die’ war. This struggle is more time-consuming and strenuous. But if we remain united and work hard, and we are in an honest path, victory is ours, Insha Allah”.

Sheikh Hasina said the UK-based multi-national company, Price Water House Coopers, in a report said Bangladesh would become the 29th economy of the world by 2030 and 23rd by 2050.

“To achieve this goal, desired employment opportunity would have to be created through sustainable economic development industrialization, trade expansion, boosting remittance, developing infrastructure and improving education and healthcare services,” she said.

The premier said Bangladesh would secure recognition of a poverty-free country by 2030. “To fulfill this target, the present government is continuing its support for increasing investment, creation of employment opportunity and improvement of business environment, reduction of cost of doing business and setting up of priority-based industries,” she said.

Sheikh Hasina said her government after assuming office in 2009 began implementation of vision 2021 and managed to lower the poverty rate to 22.4 percent in 2015 from 40 percent in 2005.

The per capita income rose to $1466 and Bangladesh earned a GDP growth above 6 percent over the last several years and 7.11 percent growth last year.

“The export earnings rose to over $34 billion in 2015-16 from a mere $10.5 billion in 2005-06, while the foreign currency reserve stands at $32 billion,” she said, adding 90 percent of the country’s development project fund comes from internal resources.

The premier said by 2041 the country’s economy will be at the centre-stage of the regional economy of Asia and local supply chain and global value chain will play an important role in regional and sub-regional communication and connectivity.

“I believe that the economy pursued by us will usher-in a new horizon of success creating a win-win situation in improving sub-regional and international economic relations and expanding trade and commerce, and investment,” she said.

The premier said development of power and energy will strengthen the economy of Bangladesh. According to our vision 2021, she said, cent percent people will be brought under electricity coverage by 2021.

Sheikh Hasina said Bangladesh has earned a remarkable success in achieving MDGs and similarly Bangladesh wishes to emerge as a global role model of implementing SDGs achieving its targets by 2030.

She said Bangladesh will celebrate the 70th anniversary of its independence in 2041. “I firmly believe that it will be a $2.5 trillion economy and per capita income will be $12,600 by 2041,” she said.

Sheikh Hasina said with commissioning of 105 new power plants during the last 7 and half years, the electricity production capacity rose to 15000 MW. “Nearly 78 percent population of the country is now under electricity coverage and some 4.5 million solar home systems have been established in off-grid areas,” she said.

“I believe our economy will be bolstered further once these projects are implemented,” she said.

Sheikh Hasina thanked Dhaka Chamber of Commerce and Industry for organizing this international conference to devise strategy to build a developed Bangladesh by 2041.

“I hope required outline, innovative concept and necessary guidelines to face the challenges to achieve the development goals of 2041 will be highlighted in the conference and the strategic papers to be prepared will focus on the emerging prospects,” she said.

DCCI Senior Vice-President Humayun Rashid gave the vote of thanks.

The prime minister at the function also handed over “The Illustrious Son of Dhaka Award” to Anwar Hossain, Chairman, DCCI Foundation and Anwar Group of Industries.

Previous Reading goes out of fashion in Hong Kong in the internet age, or has it?
Next Greenpeace: EuGH-Gutachten zu Singapur muss Signalwirkung für weitere 45 EU-Handelsabkommen haben