The OPEC production cuts since the start of 2017 has tightened supplies of medium and heavy sour crudes, leading to a narrowing Brent-Dubai EFS. This has made long-haul crude trades from the Atlantic Basin to the Far East economically viable, resulting in a surge in flows from the North Sea as well as Americas which has in turn boosted ton-mile demand in the VLCC sector. Growing ton-mile demand has helped to halt declining rates in a sector flooded with newbuild deliveries in Q1, as seen from the chart below. VLCC rates for the benchmark AG/Japan route rebounded from w46 end-March to current levels of w65. 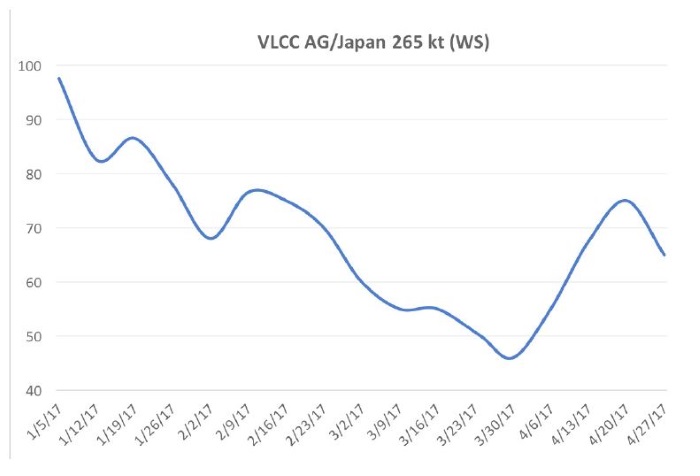 Rates for a Hound Point/Far East voyage climbed by $625,000 over the past two weeks to current levels of $4.925 million on the back of tighter tonnage in the region. Our data shows that at least 9 VLCCs are carrying crude from the North Sea to Asia in April, with another 4 VLCCs fixed for May loading so far. The Brent-Dubai EFS hit a seven-year low on Monday at $0.57/bbl on Monday according to Bloomberg, which will continue to incentivize more long-haul arbitrage trades. The widening contango in Brent timespreads will also encourage traders to place more barrels into Asia. Similarly, rates for a Caribs/Singapore run grew by $300,000 over the last two weeks to $4.3 million due to increased movements from the Caribbean, Brazil and the USGC to the East.

The unwinding of onshore storage in the Caribbean as reported by Bloomberg accounts for the growing outflows to Asia, with at least 10 VLCCs heading from the Caribbean to Far East in April (up by 43% m-o-m). Robust Chinese demand for low sulfur Brazilian crude has led to a surge in Brazilian exports over Q1. Brazilian crude exports to China hit 470 kb/d in Q1, up by 70% y-o-y. While the recent rally in VLCC rates seems to have come to an end, increasing ton-mile demand from such long-haul arbitrage trades should lend some support to rates. However, whether such opportunistic trades will continue to flourish depends on a potential extension of the OPEC production cuts as well as crude spreads.
Source: OFE Insights