Hiding billions in artworks: The art of secrecy 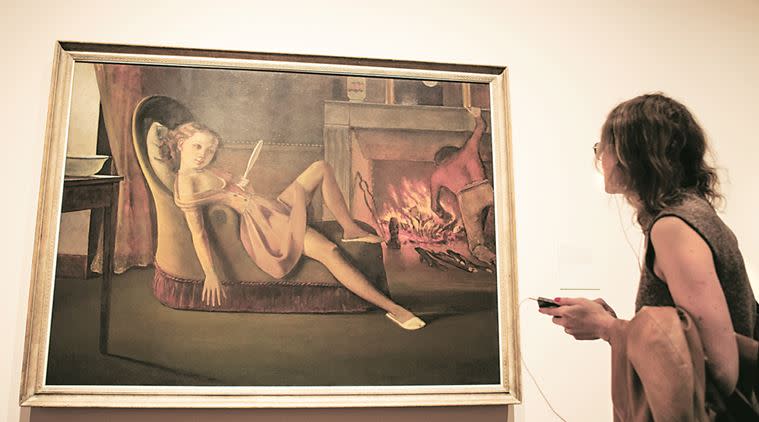 After a chance discovery, the grandson of a Jewish art dealer learned that a valuable painting he believed the Nazis had looted from his grandfather might now be in the hands of one of the art world’s most influential families. Proving it has been another matter.

The work, by Italian artist Amadeo Modigliani, is known as ‘Seated Man with a Cane.’ Modigliani’s paintings today sell for as much as $170 million. The portrait of a dapper man with a mustache perched on a chair, hands resting upon his walking stick, may be worth $25 million.

Investigators traced the painting to a clan of billionaires that bought the work at an auction in 1996. Lawyers working for the grandson sent a letter to the Nahmad Gallery in New York, stating that the painting belonged to the grandson, who was entitled to its return. The grandson sued. Four years later, the two sides are still fighting it out.

The Nahmads have insisted in federal and state court in New York that the family does not possess the Modigliani. An offshore company called International Art Centre, registered by a little-known Panamanian law firm, does.

Watch Video | Explained: What Do The Panama Papers Reveal

But the Mossack Fonseca leaks suggest that the statement is a legal sleight of hand designed to obscure the true owners of the painting. The records paint a picture of a thinly regulated industry where anonymity is regularly used to shield all kinds of questionable behaviour.

The Nahmad family has controlled the Panama-based company, International Art Centre, for more than 20 years, the records show. It is an important part of the family’s art business. David Nahmad, the family leader, has been the company’s sole owner since January 2014.

When confronted with documentatation that showed the Nahmads owned International Art Centre, David Nahmad’s lawyer, Richard Golub, said “whoever owns IAC is irrelevant. The main thing is what are the issues in the case, and can the plaintiff prove them?” The question, Golub said, was whether the grandson can prove this specific painting was stolen from his grandfather.

Mossack Fonseca not only helped the Nahmads establish International Art Centre in 1995, it provided many of its other clients with the tools to secretly carry out high-end art transactions worldwide for works by artists such as Van Gogh, Rembrandt, Chagall, Matisse, Basquiat and Warhol.

Zhongjun did not respond to a request for comment. Ruiz-Picasso declined to comment. Brojia Thyssen acknowledged having an offshore company but said it was fully declared with Spanish tax authorities.

The firm’s records mention enough art to fill a small museum. Along with crucial new evidence in the legal battle over the Modigliani, there are clues in Mossack Fonseca’s files to the mystery of the missing masterpieces of a Greek shipping magnate and previously unknown details behind one of the 20th Century’s most famous modern art auctions.

The documents reveal sellers and buyers of art using the same dark corners of the global financial system as dictators, politicians, fraudsters and others who benefit from the anonymity these secrecy zones offer.

In recent years, as art prices have grown dramatically, transactions are often obscured by the use of offshore companies, front men, free trade zones, manipulated auctions and private sales. While secrecy may be exploited legally to avoid publicity, limit legal exposure or ease operations across borders, it can also be employed for nefarious purposes, such as evading taxes and hiding shady ownership histories. Since art is easily transportable, expensive and poorly regulated, authorities fear that it is often used for money laundering.

The current art market boom — and its connection to the secrecy zones within the global financial system — offers more evidence of the spectacular rise of the super rich. Art has become a valuable asset for a global elite eager to stash their money in safe and secluded harbours. In 2015, sales of art exceeded $63.8 billion, according to the trade publication Art Market Report, with top-dollar art experiencing the greatest growth.

Roughly half of art transactions are private, strictly between sellers and buyers, Art Market Report estimates. There is little public information about these sales. The rest are done through public auctions, which provide transparency in regards to price but usually still allow buyers and sellers to remain a mystery.

When high-dollar art changes hands, it often lands in a free trade zone known as a freeport. As long as art is housed in the freeport, owners pay no import taxes or duties. Critics worry the freeport system can be used to dodge tax or launder money since precise inventories and transactions are not tracked. The oldest freeport, with the most art, is in Geneva. Its complex of storage facilities is said to contain enough treasure to rival any museum in the world.

Natural Le Coultre, a company owned by Yves Bouvier, rents almost a quarter of the space in the Geneva freeport. Bouvier is also a primary owner of other freeports in Luxembourg and Singapore and a consultant to a facility under construction in Beijing. These interests have earned him the title “the King of the Freeports.”

But it is Bouvier’s activities as a middleman in private deals that have made him the talk of the art world, and a target for civil suits.

Russian billionaire Dmitry Rybolovlev has filed complaints against Bouvier in Monaco, Paris, Hong Kong and Singapore, accusing him of fraudulently marking up the prices of paintings before selling them. After reviewing the claims, a judge in Singapore lifted a freeze on Bouvier’s assets and a judge in Hong Kong followed suit. Bouvier has denied the charges.

Not surprisingly, given the number of billionaires and art dealers who use Mossack Fonseca services, both men are clients of the firm. The law firm’s records show at least five companies connected to Bouvier, although none appear to be related to the Rybolovlev case. His antagonist, Rybolovlev, has two.

Many trace the art market’s wild enthusiasm for modern art to a sale on a Monday evening in November 1997. Held at Christie’s in New York, the auction of the Victor and Sally Ganz collection produced record valuations for paintings and proved a milestone in the transformation of art into a global commodity.

“All of a sudden the game was afoot with the Ganz sale in a way that hadn’t happened before,” says Todd Levin, director of Levin Art Group, a New York-based art advisory firm. “It was like a steroid injection to the market.”

The full story behind the Ganz auction has never been revealed. The leaked documents show it involved hidden interests and one of the art world’s favourite offshore middlemen, Mossack Fonseca.

The Ganzes were collectors of works by Pablo Picasso, early champions of Frank Stella and friends and patrons of Jasper Johns, Robert Rauschenberg and Eva Hesse. After the couple died, their children were forced to sell a collection that had adorned the walls of their childhood home. It had cost the Ganzes about $2 million over 50 years to assemble. In one evening, the collection sold for a record $206.5 million. Unknown until now is that the Ganz heirs appear to have sold the collection months before the auction. The key player in the transaction was a corporation based on Niue, a speck of an island in the South Pacific. The company was named Simsbury International Corp. Simsbury International appears to have been created solely for the Ganz transaction. It was incorporated in April 1997. A month later it purchased the collection. Ownership of the company was held through “bearer shares.”

The controversy over Modigliani’s ‘Seated Man with a Cane’ began in a time when the fog of war provided the kind of concealment the offshore world offers today. Oscar Stettiner, the Jewish dealer who is alleged to have been the original owner of the painting, fled Paris in 1939, in advance of the Nazis, leaving behind his art collection.

After the city fell, the Germans seized the collection and appointed a French “temporary administrator,” who auctioned off the painting for the benefit of the Nazis, according to legal filings. ‘Seated Man with a Cane’ changed hands multiple times after that. In October 1944, a US military officer bought the Modigliani in a café for 25,000 francs.

In 1946, Stettiner filed a claim in France to begin the process of recovering the painting, court documents filed on behalf of his grandson say. He died two years later, with his petition still pending.

The Nahmad’s lawyer Richard Golub disputes this narrative. He questions whether Stettiner ever owned the painting.

By 1958, the Modigliani entered a private collection where it stayed hidden until 1996, when International Art Centre bought it at Christie’s in London for $3.2 million.

Toronto-based Mondex Corp, a firm that specialises in recovering Nazi-looted art, discovered the painting’s alleged provenance by accident while looking through files in a French ministry. The company helped initiate the legal battle to return it to Philippe Maestracci, Oscar Stettiner’s grandson.

In September 2015, New York Supreme Court Judge Eileen Bransten dismissed the Maestracci case. Among her findings, the plaintiffs had failed to properly serve the complaint on International Art Centre because they had served papers at the Nahmad Gallery in New York instead of going to Panama. Two months later, the administrator re-filed the case in state Supreme Court in New York as plaintiff.

The new complaint against the Nahmads made another effort to link the family to ownership of International Art Centre, which it described as an alter ego of the family enterprise “in a manner so as to confuse and conceal their identities, and hide revenues generated” from the Nahmad family’s art dealing business. As the case continues on, ‘Seated Man with a Cane,’ is tucked away in the Geneva freeport, another treasure hidden from view.