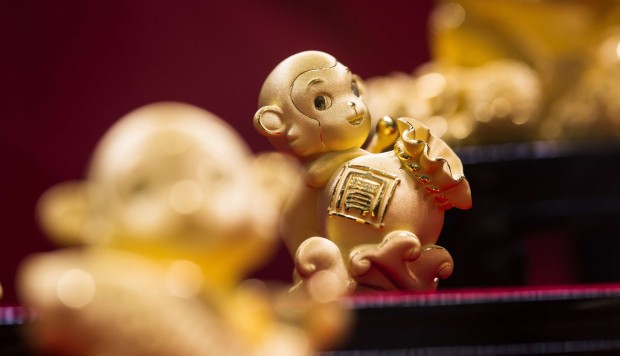 The worst is yet to come for Hong Kong jewellery retailers, according to analysts, as fewer tourists visit the city and demand shrinks in mainland China, and even a surge in the price of gold is unlikely to help.

“We do not expect a quick rebound in the jewellery market,” Jefferies said in a research report, after Hong Kong’s jewellery giant Chow Tai Fook reported 26 per cent year-on-year fall in same stores sales for the three months to the end of March, the fourth quarter of its 2016 financial year.

Same store gold jewellery sales plummeted 27 per cent, even though the price of gold jumped 19 per cent amid rising risk-averse sentiment globally.

Another jewellery retailer, Luk Fook, saw overall same store sales decline 27 per cent during the same period, compared with a 25 per cent drop in the previous quarter. Its gold jewellery sales plunged 28 per cent.

Jefferies said it expected Chow Tai Fook’s revenue would fall 7.8 per cent year on year to HK$59.2 billion for the past financial year, with net profit plunging 38.9 per cent to HK$3.3 billion.

CLSA estimated Chow Tai Fook’s revenue would fall 6.6 per cent to HK$60.06 billion and would dip a further 2.5 per cent in the current financial year.

Unless gold price shows a sustainable upward trend, we don’t see gold sales helping in the first half of their financial year

Hong Kong jewellery retailers have seen gold sales jump in the past when the price of gold surges, Nomura said in a report. But history was not repeating itself this time.

“The key question is how quickly the Fed raises interest rates this year,” Nomura analyst Qian Yao wrote in the report. “Unless gold price shows a sustainable upward trend, we don’t see gold sales helping in the first half of their financial year 2017.”

Lina Yan, a consumer and retail analyst at HSBC, said the volatility of gold prices had deterred purchases, despite the overall rise in the past three months.

Chow Tai Fook’s same store sales on the mainland fell 25 per cent year on year in the three months to the end of March, compared with 6 per cent decline in the previous quarter.

“Management’s earlier explanation that Lunar New Year holiday sales were hurt by strong outbound tourism does not explain the whole quarter’s weakness,” Morgan Stanley said in a report, “This suggests that the demand environment is more challenging than we previously thought, especially in mainland China.”

The mainland’s economic slowdown was to blame for the weak luxury spending, but foot traffic had also shifted to “lifestyle-based” shopping malls from department stores, where 80 per cent of Chow Tai Fook’s jewellery stores were based, Morgan Stanly analysts Edward Lui and Lillian Lou said in the report.

Market watchers are sceptical that the solutions jewellery retailers have come up with will help improve sales.

Chow Tai Fook said in its interim report that it was putting more emphasis on e-commerce and mobile platforms. Emperor Watch and Jewellery chairwoman Cindy Yeung said earlier this month that it planned to expand business in Southeast Asia, in places such as Thailand and Malaysia, because mainland tourists were now heading to those areas.

“E-commerce is never a major channel for high-ticket items, and it tends to shift sales from one channel to the other, rather than boosting demand for low-frequency purchase items,” HSBC’s Yan said.

Ronald Wan, a partner at Capital International, said that Southeast Asian markets, except for Singapore, were not free and open enough and there were obstacles to opening stores.

“It would not help in a large scale, as it might not be able to marginally offset the loss of foot traffic in Hong Kong,” Yan said.

Hong Kong saw the number of mainland tourists fall 18 per cent year on year in the first two months of this year, Tourism Board data shows.

“Tough times continue, but we still believe that Chow Tai Fook is one of the better-managed companies in the consumer space and will be one of the long-term winners in the luxury segment,” CLSA said in a research report.

Previous CEO Turnover at a Record High Globally, With More Companies Planning for New Chiefs from Outside the Company
Next Hasbro : The Latest: Asian shares rebound, led by Japan