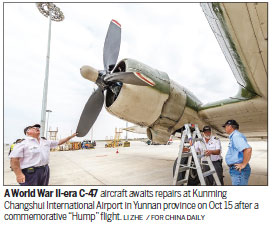 A restored military transport plane re-creating the famed “Hump” route of World War II had to fly through some tense moments – about three months’ worth.

“We were about halfway to Guilin, over the ocean an hour and a half out of Bali on the way to Malaysia when we blew a cylinder off the left engine, resulting in a fire in that engine,” said Larry Jobe, president of the Flying Tiger Historical Organization (FTHO), the California-based nonprofit group that conceived the Hump flight.

The Hump was what Allied pilots called the eastern end of the Himalayas as they flew military transport aircraft from India to China to resupply the Chinese war effort and units of the US Army Air Force based in China.

Shutting down and handling the fire successfully, they made a beeline for Surabaya, Indonesia, the nearest suitable airport for landing. However, it took them six weeks and “a great deal of money and stress” to get airborne again.

“Getting the engine replaced and out of Surabaya is a story in and of itself,” Jobe said.

The crew members then went to Singapore, where they were able to adjust and fix the replacement engine with the assistance of the Republic of Singapore Flying Club.

With both engines running well, they went to U-Tapao and Chiang Mai, then Mandalay without incident and over the Himalayan Mountains to Kunming, “just as so many in World War II did”, Jobe said.

“But about 10 miles out of Kunming, the plane lost the second engine when the No. 1 cylinder head loosened up, causing the engine to vibrate violently and spewing oil all over the nacelle and wing,” he said.

In Lingui county, the crew received help and financial assistance from the local government. Fortunately, on Nov 19, the crew had good weather and accomplished the mission.

The flight, which was supposed to take about 10 days, took more than three months. The plane had left Australia (where the aircraft was purchased) on Aug 15, and passed through Indonesia, Malaysia, Singapore, Thailand and Myanmar and Kunming, capital of Southwest China’s Yunnan province, before arriving in Guilin on Nov 19, where the plane will be on display at the Flying Tigers Heritage Park and Museum.

“We met our goals of honoring the men and women of World War II, helped shine a light on their history and

promoted friendship and understanding along the way,” Jobe said.

The flight’s all-volunteer crew was made up of two Australian pilots, two Australian engineers and two American pilots, including Jobe. Five of the six crew are in their 70s and the other one is 54.

“This truly turned into a flight of friendship and relationship-building as we progressed along the nearly 7,000-mile route in a 72-year-old aircraft,” Jobe said. “Different cultures and religions pulled together to help make this mission a success, much as different nations pulled together in World War II to defend China and defeat Japan.”

The aircraft will be repainted to authentic livery for World War II and placed on permanent display at the site of General Chennault’s Command Cave at the Guilin Flying Tigers Heritage Park and Museum. A special ceremony will be held on March 25.

Luo Linquan, Chinese consul general in San Francisco, held a reception at his residence last Thursday to celebrate the mission.

“Flying Tigers is a familiar name to us all, well-known and respected both in China and the United States,” Luo said. “The American Volunteer Group headed by General Chennault fought shoulder to shoulder with the Chinese military and made brilliant achievements.”

He said that bilateral relations between China and the US have kept moving forward despite twists and turns. “We will surely carry on the Flying Tigers’ legacy and the friendship of the two peoples from generation to generation,” Luo said.