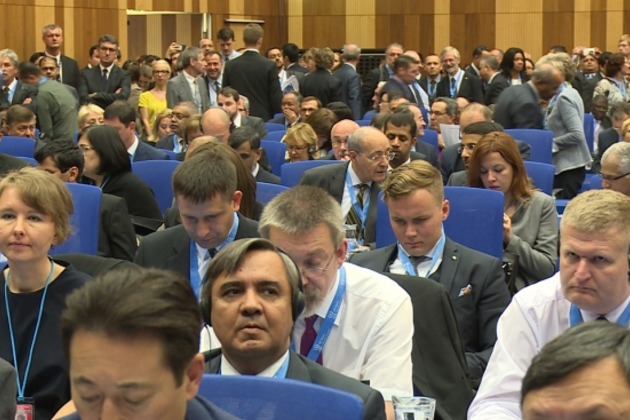 The resolutions and decisions adopted by the General Conference will guide the IAEA’s implementation of activities for the coming year. Member States also approved the IAEA’s budget update for 2017, the Financial Statements for 2015 and the IAEA 2015 Annual Report.

At the end of the week-long Conference, delegates also adopted resolutions on the implementation of the safeguards agreement between the IAEA and the Democratic People’s Republic of Korea (DPRK) and the application of safeguards in the Middle East.

The Conference adopted a resolution to strengthen the Agency’s activities related to nuclear science, technology and applications, covering both power and non-power applications. This included: progress to renovate and modernize the Nuclear Applications Laboratories (ReNuAL); the development of the sterile insect technique for the control or eradication of malaria, dengue and other disease-transmitting mosquitoes; strengthening support to Member States in food and agriculture; and approaches to supporting nuclear power infrastructure development.

Additionally, the Conference noted the Nuclear Security Report 2016, which covers the IAEA’s activities in the area of nuclear security; external users of the Incident and Trafficking Database; and other significant accomplishments within the framework of the Nuclear Security Plan 2014-2017.

A resolution to strengthen the effectiveness and improving the efficiency of IAEA safeguards calls on all Member States to give their full and continuing support to the Agency in order to ensure that it is able to meet its safeguards responsibilities was approved.

The adopted resolutions will be posted on the Resolutions page of the General Conference website as they become available.

Around 2500 delegates from 155 IAEA Member States, international organizations, NGO’s and the media attended the 60th General Conference in Vienna from 26-30 September 2016.

This annual meeting also kicked off the year-long IAEA 60th Anniversary celebrations with Director General Yukiya Amano inaugurating a commemorative photo exhibition, followed by a special reception at the Hofburg Palace in Vienna.

Over 30 side events took place, including the two-day Scientific Forum, which highlighted how nuclear technology can help achieve the Sustainable Development Goals. HSH Prince Albert II Monaco was the guest of honour at the Forum and gave the keynote address.

At the meeting, the applications for IAEA membership by Saint Lucia, Saint Vincent and the Grenadines, and the Islamic Republic of the Gambia were also approved.

Eleven countries have been newly elected to serve on the 35-member IAEA Board of Governors for the period 2016-2018. The election took place today at the plenary session of the 60th IAEA General Conference. The newly elected Board members are Algeria, Argentina, Costa Rica, Cote d’Ivoire, Denmark, the Netherlands, Peru, Qatar, Singapore, Slovenia and the United Arab Emirates.

The 61st IAEA General Conference is due to be held from 18 to 22 September 2017 at the Agency’s headquarters in Vienna.

60th General Conference: The End of an Eventful Week