Impotence is a four-letter word in Singapore’s media

Nothing quite captures Singapore public’s imagination like some insider scoop and tattle-tailing.

An eye-opening literary piece of semi-fiction, titled Journalism and Jiujitsu, was shared widely almost as soon as it was published online last week.

Written by Joanne Leow, a former broadcast journalist with state-owned Channel NewsAsia, it relates her experiences and misadventures working in Singapore’s highly regulated media scene. Leow has since moved to Canada’s intellectually greener pastures, where she is now an assistant professor in the Department of English at the University of Saskatchewan.

On the website I edit, which has a large millennial following, our report on Leow’s article received 13,000 hits in two days. The original piece would have received an even wider readership.

In her 4,200 word essay,Leow parts the curtains to reveal what it is like for a young, thinking Singaporean to find herself in the midst of the country’s spin factory.

“Once, on air, my co-host makes an inappropriate political joke. I feel his skin redden beside me as he realises the magnitude of his gaffe,” Leow writes.

“Do you want to get us all fired? Don’t ever do that again!” her head editor screamed. Leow says the piece was part memoir and part fictionalised account. But the literary licence she has taken – a confabulation here, an embellishment there – doesn’t make its sentiments less true.

One of the most memorable anecdotes relates how Leow gets skewered by her editor for replying an email to a cabinet minister without following protocol.

“’No one replies to a minister’s email without following protocol! And especially not someone like you!’” Leow writes. “She jabs a finger into the air near my head for emphasis. Through her rage, I smell her fear.”

That’s the key word in the piece – the four letter word starting with F. Fear.

She goes on to describe the impotent role the media performs when reporting the powerful:

“They speak; we record, faithfully transcribe. We edit only for clarity.”

She also describes her self-censorship when she edits a TV report about voters’ celebrations when an opposition candidate retains his seat in an election.

“We wait for our slot in the news cycle. We frame the shot, carefully hiding the magnitude of the crowd on the streets.”

Of course, Singaporeans have always known they are not getting the unvarnished truth about local politics in their mainstream media. But it is rare for media insiders to talk openly about the government’s grip on the press. 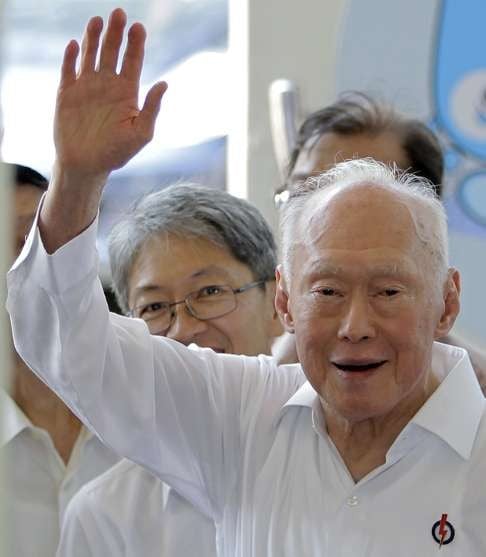 Leow’s essay describes the frustration felt by many within the educated elite. She belongs to that special breed of Singaporeans called the overseas scholar. The top ranks of the Singapore government is full of them, academically brilliant individuals sent to the world’s top universities on civil service and armed forces scholarships and bonded to work for the government on their return. In Leow’s case, she went to Brown University in the United States.

Leow describes how Lee Kuan Yew noted her stellar CV when he met her – the late premier had a well-known penchant for perusing journalists’ resumes to know whom he was dealing with.

“My orderly progression through the educational ranks seems to please him; he notes with relish that my credentials have slotted me into the correct position in his hierarchy of things. That I have taken his well-known admonishments to study in both in the United States and in China seriously,” she writes.

But Leow gets no joy from his approval. Quite the contrary. When Lee goaded her, “Ask me anything”, it was a recognition that her life had all along been operating on his terms, unbeknownst to her. “It is at this moment that I realise, more thoroughly than at any other moment, that I have always lived in a dictatorship.”

The truth will set Singapore media free … well, not necessarily

That’s the other thing that makes Leow’s essay such compelling reading for Singaporeans. She should rightly be part of the cream of the establishment that keeps it going. Instead, she is the defecting mafioso.

Her former editor’s prediction that she’ll “never get anywhere” was only half-true. The editor was right that Leow was not cut out for mainstream journalism in Singapore. But, no longer reliant on the blessings of the regime, she seems pretty comfortable now.

Some may wonder why someone who represents the cream of Singapore’s system turned her back on that very structure.

Defenders of the system might dismiss her by saying that some people who are part of the cream can be quite thick.

But perhaps a fairer reading is that when you have had the best education money can buy, you may want to be true to yourself. Not some lofty national narrative. And definitely not to a state-owned media regime.

Belmont Lay is the founding editor of Mothership, a Singapore-born Internet media company, one of the fastest growing digital platforms in Singapore, attracting an average monthly visitorship of 3.8 million with 60 percent under the age of 34. Mothership helps brands speak with digital audiences through its content marketing services.