Income inequality widens in the Bahamas 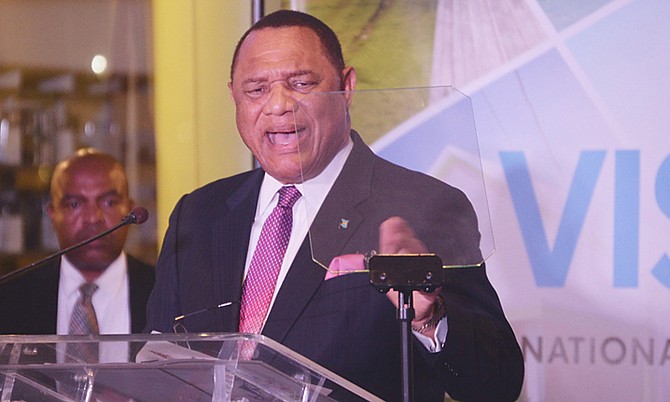 Prime Minister Perry Christie speaking at the unveiling of the National Development Plan last night at the College of The Bahamas. Photo: Shawn Hanna/Tribune Staff

INCOME inequality is widening in the Bahamas and poverty rates have increased in all age categories under 65 during the past decade, the state of the union report by the National Development Plan Secretariat says.

Released yesterday, the 77 page document paints a picture of a country that, despite its stable and strong democratic tradition, is underperforming significantly on multiple fronts, from education to economics to governance.

The report draws linkages between rising levels of poverty and crime rates and it describes youth unemployment as a crisis in need of urgent attention because of what it means for the increasingly aging population of The Bahamas.

The report notes that the government scores poorly on results-based planning and results-based budgeting metrics and the lack of campaign finance legislation remains a cause for concern.

The report’s release during a splashy event at the College of the Bahamas yesterday constitutes the end of the first phase of the National Development Plan (NDP) process.

Next, the secretariat will consult Bahamians via town hall meetings, surveys and one-on-one meetings.

All this will culminate in the drafting of the NDP document – the most ambitious project of its kind in Bahamian history, one that will include a “national vision, national goals, (and) strategies” to realise them.

Largely using data from previous studies along with its own research, the state of the union report attempts to provide a comprehensive overview of the country, highlighting its strengths and weaknesses.

“Too often, the public service is driven by traditional practices at a time when Bahamians are increasing their demand for services that are outcome focused,” the report says.

Following in the vein of countries like Singapore, South Korea, South Africa and Jamaica, the NDP aims to combine government, private sector and civil society forces to produce better public policies and outcomes.

The project has earned bipartisan support from the major political parties: although Free National Movement leaders Dr Hubert Minnis and Peter Turnquest did not attend yesterday’s launch, both the FNM and the Democratic National Alliance (DNA) were represented.

In his speech, Prime Minister Perry Christie urged politicians to view the NDP as a shared vision and opportunity for them all.