Prime Minister Narendra Modi inspects a guard of honor before addressing the nation from the ramparts of Red Fort in New Delhi. Express Photo by Tashi Tobgyal

Growth in Asia’s third-largest economy has been slowing for the past five quarters, thanks largely to the chaotic roll out of the goods and services tax and a surprise ban on currency notes to pin down tax evaders. That’s sparked talk of stimulus measures to boost expansion from the slowest pace in three years. But his options are limited.

Modi’s administration, which took power in 2014 promising to create jobs, is battling a public perception of economic mismanagement after growth fell below 6 percent in the June quarter. On top of it, foreigners are dumping stocks at the fastest pace this year as weak earnings fail to justify the boom in share prices.

Highlighting the need to battle a slowing economy, Modi on Monday announced the formation of a five-member panel to advise him on economic issues as he faces a slew of provincial elections in the coming months and a general election in 2019. He also unveiled a $2.5 billion program to ensure electricity for all households, which may help boost the rural economy.

The government’s regular cash cows aren’t in the pink of health either. The central bank has halved its annual payout, asset sale proceeds are far from the target, and telecom spectrum auctions may not find many takers as carriers struggle amid a brutal price war. Refund claims under the goods and services tax have further put the receipts goal at risk.

“A policy stimulus, using some combination of monetary and fiscal policies, could provide a short-term boost to growth but is unlikely to be fully effective unless accompanied by a broader range of reforms that are essential to rebuild confidence and stimulate investment,” said Eswar Prasad, a professor at Cornell University.

Modi has tried, albeit unsuccessfully, to change archaic labor and land laws in the country to enable faster growth. Meanwhile efforts to clean bank balance sheets with a new bankruptcy framework has yet to yield results. Private investment has been sluggish with banks battling bad assets and credit growth for years now.

GDP growth is the weakest since 2014 — the GST roll out in July dealt a fresh blow to businesses even before they could recover from the cash clampdown of November. The move to void 86 percent of currency in circulation hurt consumption and investment in what was once the world’s fastest-growing major economy. 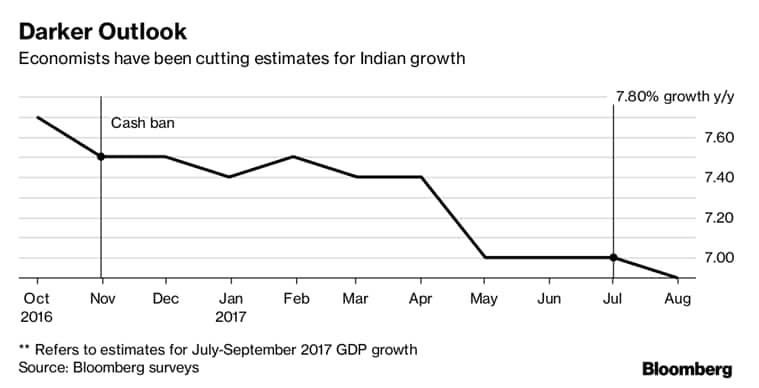 Measures to support growth might come at the cost of fiscal slippage. The budget deficit is pegged at 3.2 percent of the gross domestic product in the year through March.

Any stimulus could potentially boost the budget gap to 3.5 percent to 3.7 percent and end hopes of a cut in interest rates, Deutsche Bank chief economist Kaushik Das wrote in a note September 22. “We don’t expect monetary policy to be simultaneously accommodative with fiscal expansion, given Reserve Bank’s focus to preserve macroeconomic stability.”

Deterioration in public finances would deny India an upgrade from rating companies. Earlier this year, S&P Global Ratings retained India’s rating at one step above junk. A cut might force investors to dump Indian assets in favor of safer heavens.

Letting the fiscal deficit widen to pump up growth could do more harm than good, said Priyanka Kishore, lead Asia economist at Oxford Economics, Singapore. “Modi doesn’t have too much space to maneuver,’ she said.