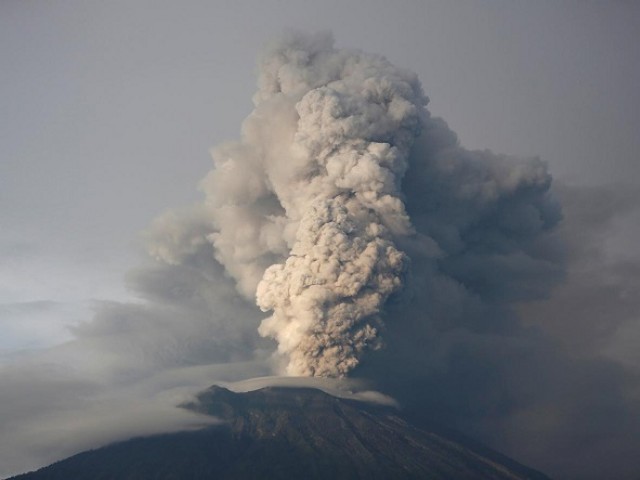 JAKARTA: Indonesian President Joko Widodo will on Friday hold his cabinet meeting on the holiday island of Bali in a bid to reassure visitors that there is nothing to worry about from the rumbling Mount Agung volcano.

Authorities last month raised the alert status of Mount Agung in northeastern Bali to the highest level, imposing an exclusion zone of up to 10 km around its crater as it spewed clouds of ash, steam, and other volcanic material. Widodo will take the unusual step of gathering his cabinet in Bali as part of government efforts to assure visitors that the island is safe to come to and to stave off a major drop off in visitor numbers during the upcoming holiday season.

“For those who have plans to vacation in Bali, there’s no need to doubt or be worried about the status of Mount Agung, Bali is very safe to visit,” Energy Minister Ignasius Jonan said in a Twitter message after visiting an observatory overlooking the volcano, before the cabinet meeting. President Widodo is expected to make a statement after the cabinet meeting.

The cabinet usually meets at the state palace in the capital Jakarta or on its outskirts in Bogor. The relatively small island of Bali, famous for its beaches and temples, has an outsized importance for Indonesian tourism.

In January-September, Bali received 4.5 million foreign tourist arrivals, nearly half of the 10.5 million arrivals in Indonesia. Tourism Minister Arief Yahya said this week that Indonesia was expecting an estimated 15 trillion rupiah ($1.11 billion) in lost income and around 1 million fewer tourists because of the volcano, according to daily newspaper Kompas.

Many business operators and hotels have seen cancellations since authorities first raised the alert in September, and most expect the holiday season to be slower than in previous years. Thousands of tourists were left stranded late last month when a volcanic ash cloud forced the closure of Bali’s airport for several days. Countries like Australia and Singapore have advised their citizens to be cautious when travelling to Bali.