The Indonesia Stock Exchange (IDX) closed on Friday, the final trading session of the year, with its benchmark Jakarta Composite Index (JCI) at 5,296, up by 15.3 percent from its position during 2015’s year-end closing.

Coordinating Economic Minister Darmin Nasution, who replaced President Joko “Jokowi” Widodo at the last minute for the IDX closing bell ceremony, said the annual return from Indonesia’s stock market only fell behind that of Brazil, Russia, Thailand and Canada. Even in the Asia-Pacific region, it only came second behind Thailand, which this year recorded an annual return of 23.89 percent.

“I appreciate the hard work of the IDX board of directors for this achievement,” Darmin said.

“We had 15 IPOs throughout 2016, while Singapore lost 10 public companies and the Philippines lost one,” he said. (hwa) 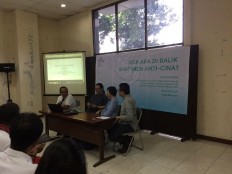