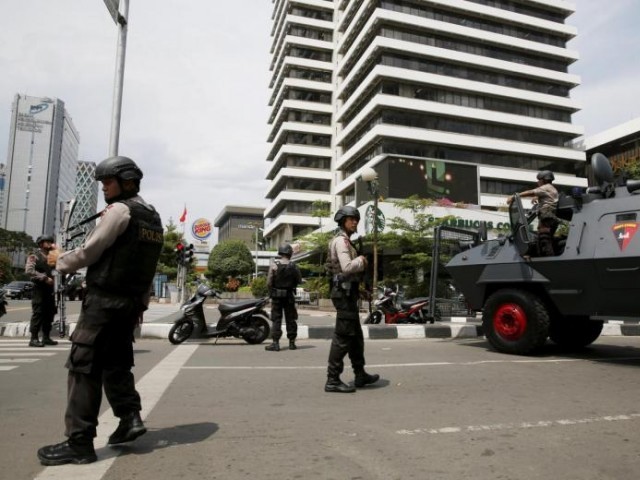 The plot was broken up after police arrested two of the would-be attackers who led them to their hideout, where police shot dead their co-conspirators on Sunday after they tried to attack officers with machetes.

“The four of them were planning to attack a police post in
Purwakarta. They planned to attack on New Year’s Eve,” Rikwanto,
a national police spokesoerson, told reporters, referring to a
district about 100 km (60 miles) east of the capital, Jakarta.

Sunday’s raid was the latest in a series over recent weeks that police claim to have foiled attacks, raising concern that homegrown militants in the world’s largest Muslim-majority nation are getting bolder.

Officials said that since last week at least 14 people were being interrogated over suicide bomb plots targeting the presidential
palace in Jakarta and an another undisclosed location. Both involved female suicide bombers – a new tactic for Indonesian militants.

Police were still investigating whether the militants involved in the plot disrupted on Sunday had been trying to make bombs.

The suspects were members of Jamaah Ansharut Daulah (JAD), a militant group supporting Islamic State, but it was not yet clear whether they been in direct communication with Bahrun Naim, an Indonesian militant who fled to Syria about two years ago, the spokesperson added.

Police say many of the recent plots uncovered have been
inspired, if not directed, by Naim. Dozens of suspected militants have been arrested in recent months, including a group on an island near Singapore who police say were planning to attack the city-state with a rocket.

Indonesia’s elite police unit, Special Detachment 88, has foiled at least 15 attacks this year and made more than 150 arrests. A gun and bomb assault in the heart of Jakarta in January 2016 killed four people and was the first attack in Southeast Asia claimed by Islamic State.