International calls to US, UK and other countries at Rs 3 if you subscribe to ISD rate cutter plan

New Delhi, April 18: The new entrant in the telecom sector, Reliance Jio has made a place for itself in the Indian market and now plans to woo its users by offering international calling plans. Reliance Jio’s foray into the telecom sector has changed the paradigm forever. What felt like a distant dream is nothing but a reality today as connectivity has become easier and affordable for Jio users. The current juggernaut of Jio has begun a revolution in the telecom segment in India which was earlier dominated by Jio rivals- Bharti Airtel, Idea and Vodafone.

Today, it has become so easy for people to connect to each other in Indian and abroad. Jio, known for its disruptive is charging at as Rs 3 per minute for International Calls. The voice call charges have been drastically reduced to minimal, but there comes a twist. For any Jio user to avail this offer, one has to recharge with a ISD rate cutter plan available at Rs 501. While speaking to a Jio customer care executive, India.com  has learned that the Jio user has to recharge with an amount of Rs 501, which will be added to the user’s account balance.

Like for example, if a Jio user wants to avail this offer, he/she will have to do a recharge of Rs 501. Once the recharge is successfully done, the user is applicable for making international calls. For instance, if the user wants to call someone in the United States of America, he/ she will be charged Rs 3 per minute as per what is stated on the Reliance Jio site. After the call is made, the total amount will be deducted from the Rs 501 recharge balance. So if the user has spoken for 2 minutes, Rs 6 will be deducted from the Rs 501 recharge balance.

If you visit the Reliance Jio website, you can go through all the Jio plans at one go. You can also check out various plans under which Jio is offering unlimited benefits for its users. The details of the ISD rate cutter plan are present at the bottom of the page, like shown in the picture below. 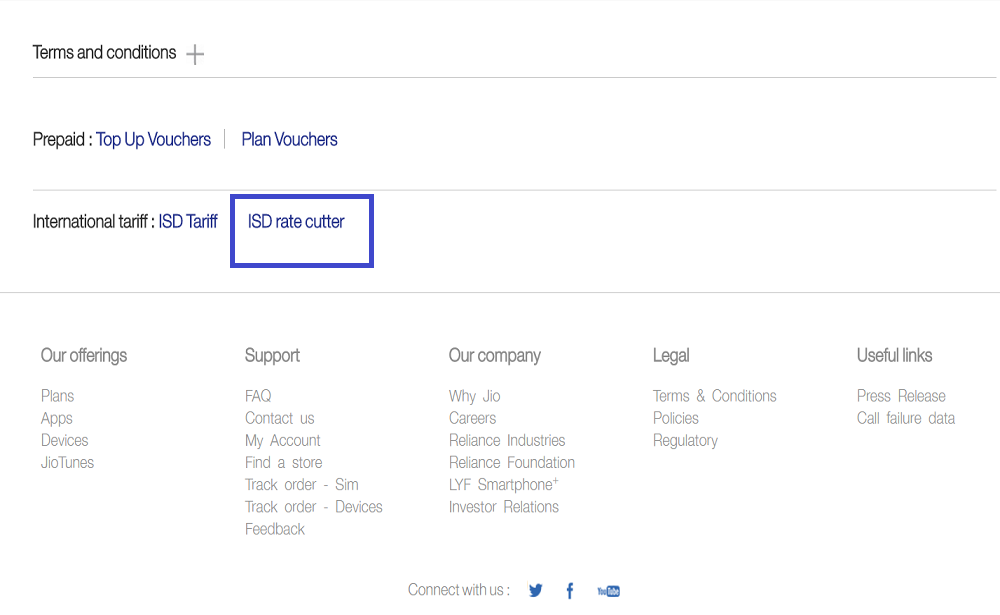 The user will be able to make calls to some of the major countries like the United States, United Kingdom, Canada, and Singapore at just Rs. 3 per minute. The other countries for which voice calls are charged Rs 3 per minute include Andorra, Austria, Belgium, Brazil, French Guinea, Hong Kong, Italy, Luxembourg, Malta, Mongolia, Morocco, New Zealand, Poland, Portugal, Puerto Rico, Romania, Sweden, Switzerland, and Taiwan. As per details on Reliance Jio site, other countries including Argentina, Denmark, France, Israel, Japan, Pakistan, South Korea the voice calls will be charged at Rs. 4.8 per minute. Click here for international calling rates after the ISD rate cutter recharge

Earlier this month, Reliance Jio announced a new offer for people who hadn’t signed up for its Summer Surprise offer. The offer was named as Jio Dhan Dhana Dhan, which was similar to the Summer Surprise Offer. Under the Jio Dhan Dhana Dhan offer, the company gave its users 3 months of 1GB per day usage. This offer was applicable to anyone who recharges for Rs. 309, plus another Rs. 99 to subscribe for Jio Prime.

When Jio announced this offer, it mentioned that the users will need to subscribe to Jio Prime membership plan and buy the Rs. 309 or Rs. 509 recharge by April 15 in order to to avoid discontinuation of its services. Jio extended the deadline for signing up to Jio Prime to April 15, up from March 31. The company however, has begun the disconnection of services for all those users who hadn’t opted for any plans.

Jio since its launch has come up with a slew of offers including unlimited free calls and unlimited high-speed data under its various plans starting from its Welcome Offer to Jio Dhan Dhana Dhan Offer. This strategy has placed Jio on top of other incumbent operators in the telecom sector. Jio’s heavily discounted pricing of its plans and offers coupled with good network coverage has forced competitors to slash down rates or come up with better offers.