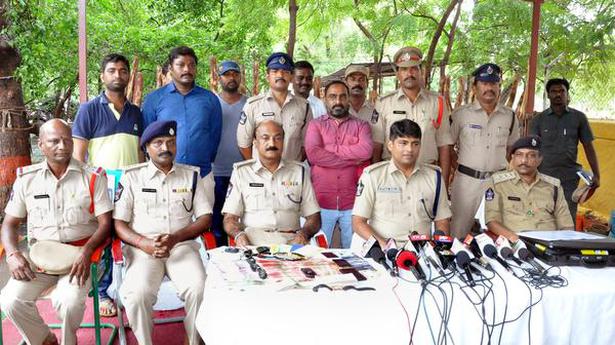 The police on Thursday apprehended an international red sanders smuggler, Ahmed Thambi Maideen, 50, of Nagapattinam district, residing at Egmore in Chennai in Tamil Nadu, popularly known as “ATM” among smugglers, and his two aides A. Jahabar Sadiq, 50, and A.J. Kamal Basha, 51, both of Karaikal in Puducherry, near Kudali checkpost on Mydukur-Badvel road in Mydukur mandal of Kadapa district.

Maideen is a close aide of international red sander smugglers Kollam Gangi Reddy and Sahul Hameed of Dubai, and is a reportedly the kingpin in smuggling red sanders from India to China, Singapore, Hong Kong, Dubai, Malaysia, Tibet, Bhutan and Nepal, Mr. Babujee said, producing the accused before the media.

The SP said Maideen, who failed X standard, worked as tea supplier in a five-star hotel at Andamans in 1987 and set up Maideen Imports and Exports company in Chennai in 1990. The Kadapa police identified movable properties of ₹1.23 crore seized on Thursday and immovable properties worth ₹78.50 crore in Tamil Nadu and Puducherry of Maideen and it would take steps to attach his properties as per the new Amendment of AP Forest Act 1967.

Maideen was arrested in five cases booked by Department of Revenue Intelligence in Chennai, Delhi and Kolkata and another case booked by Customs officials at Tuticorin port, Mr. Babujee said. The Kadapa police are probing his links with international smugglers, he added. He is an accused in 75 cases booked in Kadapa district and was arrested for the first time, though involved in smuggling since two decades, the SP said.

Jabahar Sadiq and Kamal Basha were involved in one case each. Maideen’s modus operandi was to export red sanders logs in containers under the cover of a load of granite slabs, ceramic tiles, food grains, sea food, bricks and vegetables, the SP said. He was also involved in hawala transactions, he added.