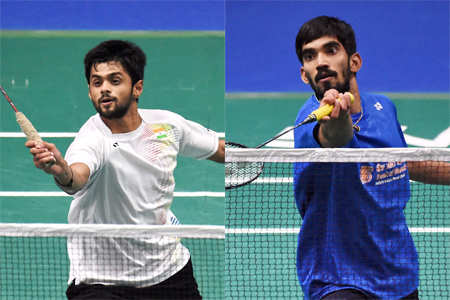 NEW DELHI: For the first time in the history of badminton, two Indians will clash in a Super Series final with Kidambi Srikanth taking on B Sai Praneeth at the Singapore Open today.

The action will begin at 10:30 am on Star Sports 4 and HD 4. The Srikanth-Praneeth encounter is scheduled as the third match of the day.

Only three nations – China, Indonesia and Denmark – have so far had two of their shuttlers playing in finals of a Super Series event.

On Saturday, former World No 3 Srikanth notched up a 21-13, 21-14 win over World No 26 and 2014 Youth Olympic Games bronze medalist Anthony Sinisuka Ginting to reach the third Super Series final of his career.

Praneeth, who had reached the final at the Syed Modi Grand Prix Gold in January before being laid low by a shoulder injury, continued his rampaging run in the tournament to thrash three-time Korea Masters Grand Prix Gold winner Lee 21-6, 21-8 in a lop-sided semi-final match.

Interestingly, Praneeth has a 4-1 head-to-head record against his more illustrious compatriot, who had clinched the 2014 China Super Series Premier and 2015 India Super Series and also reached the quarter-finals of Rio Olympics.

The last time they clashed was at the Syed Modi Grand Prix Gold in Lucknow and Praneeth had the last laugh.