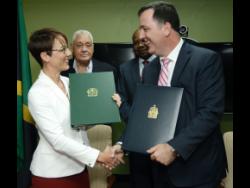 The tourism and cargo-shipment sectors are set to record momentous growth as a result of an air-service agreement that was yesterday inked between the Jamaican and Canadian governments.

The previous Jamaica Labour Party administration had appointed Hylton to chair the committee with a view towards developing an open skies policy with the inclusion of all the major countries in the world.

Hylton explained that with such a policy in place, the bureaucracy that once existed in aircraft lifting people and cargo from other countries to Jamaica is now much reduced.

In the case of Canada, with the signing of the agreement, any registered Canadian carrier can fly to Jamaica with ease.

With this agreement, the chairman believes that there is tremendous benefit for the tourism industry as there is an expectation that with more carriers being able to fly into the Jamaican airspace, airline operators would be minded to capitalise on flying in more tourists into Jamaica, especially in the winter season.

Hylton embraced the possibility that the current agreement with Canada, together with a previous pact with China, leads to the real possibility of interconnecting flights among the three countries.

“I would not be surprised if I see an interconnection with a flight from China into Canada and then into Jamaica,” Hylton quipped.

According to the Air Policy Committee chairman, the agreement also complements the Government’s ambition to implement a multimodal system of transport and further contributes to the realisation of an illusive ‘hub effect’.

“Yes, the tourism industry is set to benefit, but also as the intermodal system develops and the logistic system, we will also see growth in the movement of cargo,” Hylton told The Gleaner as he explained the far-reaching benefits of the agreement.

Tourism Minister Edmund Bartlett, who attended the signing function held at the Ministry of Foreign Affairs in New Kingston, said he was encouraged by the pact because tourist arrivals from Canada had dipped.

Arrivals from Canada have partly recovered from an 11 per cent drop this tourist season, but the minister expressed his desire for a complete turnaround of the figures to reflect positive growth in arrivals from Canada.

High commissioner of Canada to Jamaica, Sylvain Fabi, noted that the agreement was a win-win for both Jamaica and Canada.

“This agreement is important to you, but it is also important to us. It is a win-win situation for both countries,” Fabi said, adding that with Jamaica further opening up to Canada, adequate security measures would need to follow.

Bartlett agreed, but offered that with biometric technology, governments are able to determine what and who are ‘desirables’ even before landing.

For his part, Mike Henry, the minister of transport and mining, believes the agreement signals the opening up of the Jamaican market to the rest of the world.

Since 2010, Jamaica has negotiated bilateral air-service agreements with more than 20 states.