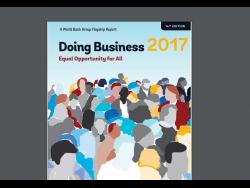 Still the report gave mixed messages on Jamaica, describing the movement in the ranking as an improvement despite worsening in nominal terms from a revised 65 globally in the previous report.

Jamaica benefited from improvements to its customs back-office network, the elimination or merging of taxes other than profit tax, and the allowance

for more deductible expenses or depreciation, according to the report published by the World Bank and its IFC affiliate.

“Both Grenada and Jamaica made significant upgrades to their electronic platforms, resulting in a substantial decrease in the time required for international trade processes. Their systems allow for the electronic submission of customs declarations and supporting trade documents. As a result, customs brokers no longer need to go to several customs clearance officers or government agencies to validate documents,” the report said.

In reactions to the report, consultant attorney and former Contractor General Greg Christie argued that the island slipped in the ability to start businesses, which traditionally was a high point for the island’s rank.

“It is clear that Jamaica fell down on starting a business, while improving on paying taxes, and so on,” Christie told Gleaner Business, while affirming, as the report’s authors did, that there was “improvement in the score”.

He, however, highlighted the report’s lack of focus on addressing issues of corruption and accountability.

Dennis Chung, the CEO of the Private Sector Organisation of Jamaica (PSOJ), said the results were not entirely unexpected as Jamaica had not made a lot of progress on taming bureaucracy.

” … We have been pointing out from the PSOJ that bureaucracy and the ease of doing business remains a huge problem – only outdone by crime,” Chung said.

“Fact is that unless we address these two issues, then we will never realise the sustainable growth above three per cent to move our development forward.”

The report, which measured the ease of doing business in 190 countries, ranked the top 10 as New Zealand, Singapore, Denmark, Hong Kong SAR, China, the Republic of Korea, Norway, the United Kingdom, the United States and Sweden, respectively. The previous survey ranked 189 economies.

CONTINUING TO OPEN UP

Jamaica continues to open up for investors by implementing a number of reforms influenced by multilateral conditionalities. This resulted in two straight years of improvements with the island jumping seven spots in the previous report to 64. It was revised to 65 in the 2017 report. Prior to that rise, Jamaica dipped in the rankings for nine straight years.

The joint World Bank and IFC flagship Doing Business report analyses regulations that apply to businesses during their life cycle, including start-up and operations, trading across borders, paying taxes, and resolving insolvency.

Chung lauded Ainsley Powell and his team at Tax Administration Jamaica (TAJ) for the improvement in the ease of paying taxes and trading across borders. “[They have] been trying to put new initiatives in place and the TAJ continues to be the star in the public sector. They still have challenges to address but relatively so,” he said.

“Major Reece has also been pushing reform at Customs especially working on ASYCUDA. Still, more needs to be done,” added the PSOJ CEO.

The Doing Business report, subtitled ‘Equal Opportunities for All’, indicated that a record 137 economies around the world adopted key reforms that made it easier to start and operate small and medium-sized businesses. It found that developing countries carried out more than 75 per cent of the 283 reforms in the past year, with Sub-Saharan Africa accounting for over one-quarter of all reforms.

The report indicates that Doing Business does not measure all aspects of the business environment that matter to firms and investors.

Since the 2015 report, the researchers adopted a new methodology to measure how close each economy is to global best practices in business regulation. A higher score indicates a more efficient business environment and stronger legal institutions.

Previous Singapore the second easiest place in the world to do business, says World Bank
Next Plíšková by už dnes mohla slavit postup