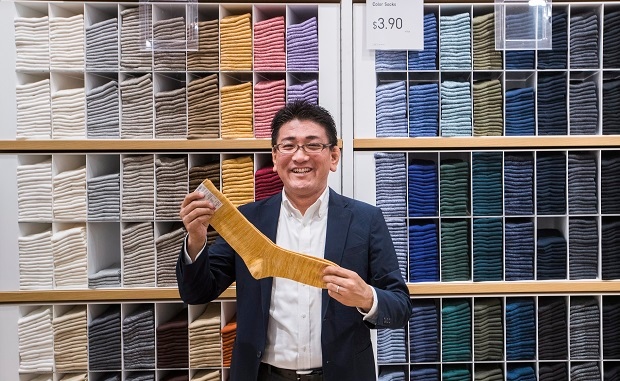 TORONTO — When Japanese apparel retailer Uniqlo decided to open its first location in Canada, it sent Yasuhiro Hayashi to Toronto every month for nearly a year to get a read on the Canadian customer.

During each visit, Uniqlo Canada’s chief operating officer would spend the week taking notes on what people wore.

“I didn’t expect that everyone was so unique and multicultural,” said Hayashi, who previously helped launch Uniqlo in Singapore and Indonesia. “That was very surprising in a very positive way.”

Unlike competitors that aim for a particular demographic, Uniqlo is hoping its appeal-to-all business model will succeed in a cutthroat industry that has laid waste to some fashion retailers, such as Aeropostale and Danier Leather.

“We don’t have a specific target customer,” said Hayashi. “That’s our uniqueness. We say we are made for all.”

The company is opening its first store in Canada on Friday, a 28,000-square foot space in the Toronto Eaton Centre wedged between fast-fashion rival H&M and the newly arrived luxury retailer Nordstrom. A second store opening is planned for Oct. 20 at Yorkdale Shopping Centre in north Toronto.

Founded in 1974, Uniqlo is known for its array of affordable basics — everything from parkas to khakis — in a variety of colours and sizes for children and adults.

“If our clothes are not affordable to the people — the regular real people, not the fashionistas, not just the celebrities, not just the rich, but for all — then I think it defeats our philosophy and what we stand for,” Hayashi said.

Even with more than 1,000 stores worldwide, Hayashi acknowledges Uniqlo may not have the same name recognition in Canada that some of its international rivals had before entering the country.

It’s one of the challenges it will have to overcome if it wants to continue expanding in Canada, something Hayashi says he would like to do but is in no rush to. It also doesn’t have any plans to offer e-commerce in Canada.

“We want to be very cautious,” he said, before alluding to the arrival of one well-known retail behemoth to Canada that went bust.

“Of course, I don’t want to give a name, but some other brands have a little too ambitious plans that didn’t work out so we want to make sure that we serve the customers well and fine-tune the merchandise mix as well.”

Last year, Target abruptly announced it was shutting down all 133 of its Canadian stores only two years after its highly anticipated arrival north of the border. Some of the criticisms levelled against the U.S. retailer were that it expanded too quickly, did not understand the Canadian customer and did not have the right product mix that it featured in its American stores.

Since then, a number of international retailers such as Saks Fifth Avenue, Muji and Nordstrom have opened locations in Canada — albeit with a more slow and steady approach.

Retail analyst Doug Stephens said Uniqlo is priced at the right end of the fast-fashion market, which still has a lot of cachet with Canadian shoppers.

But they’ll have to distinguish themselves if they want to set themselves apart from competitors and win with customers short on disposable income, he said.

“You’re always living on the razor edge at that end of the market,” said Stephens, the founder of Toronto-based consulting firm Retail Prophet.

“The Target lessons that we learned is that we don’t want you to come and tell us about us. We want you to be authentically and indigenously you,” said Winegard of retail consultancy Winegard and Company.

“So don’t try to be Canadian. Be authentically Japanese.”

Hayashi said the Toronto stores will largely be the same as its other locations, whether they’re in New York, London or Paris — with a few nuanced differences tailored to Canadian shoppers.

Customers can expect a bigger than usual selection of plaid and flannel shirts. Most sizing will be for a North American fit, but there will also be some smaller sizing to reflect Toronto’s multicultural population. Uniqlo will also sell house slippers, which is commonplace in its Asian locations.