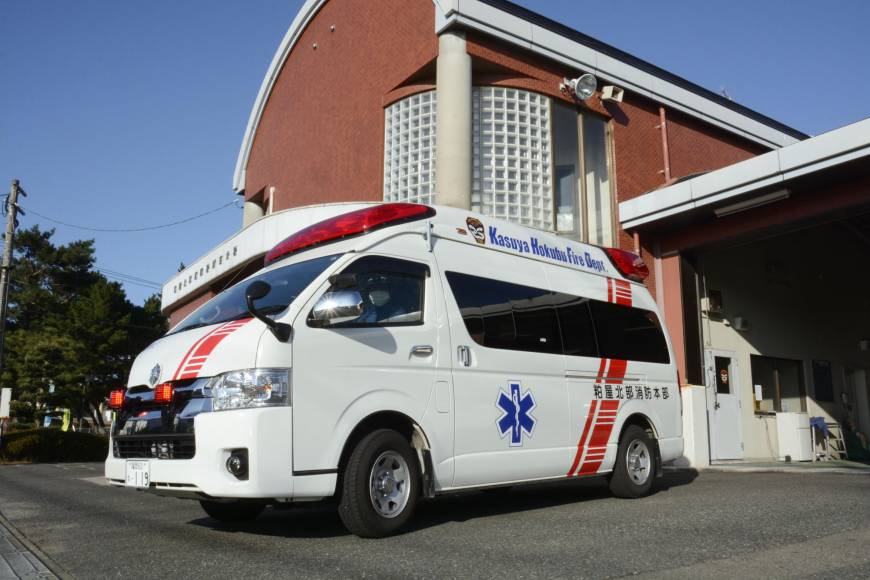 The sirens are going off about the state of ambulance services.

Demand for ambulances, which respond to calls made to the emergency hotline, 119, has grown rapidly along with the population’s pace of aging. As ambulances have been mobilized with greater frequency, emergency services are taking increasingly longer on average to arrive at the scene. These delays could prove fatal, especially during critical situations in which seconds can mean the difference between life and death.

The Fire and Disaster Management Agency has been working on the issue for years, trying to find a way of relieving the overburdened free service, operated by municipal fire stations and funded entirely by taxes. Experts have recommended that the government begin charging users as a way to discourage abuse and overuse.

Here are questions and answers on ambulance services:

How busy are the services?

In 2016, ambulances were requested a record 6.21 million times, up 2.6 percent from 2015, according to FDMA statistics. People transported by ambulances numbered 5.62 million, also a record high.

The number of people taken to hospitals by ambulance typically surges during the summer, when heat exhaustion cases spike. The number goes up also in winter at the height of flu season. During the New Year’s holidays, cases of people choking on mochi (sticky rice cakes) are fairly common. Every year in Tokyo alone, about 100 people are rushed to hospitals for mochi-related choking incidents, according to the Tokyo Fire Department.

Why is demand increasing?

Authorities say that the dramatic increase in the size of Japan’s elderly population is the main reason ambulance services have been overburdened. Of the 6.21 million cases in 2016, sudden sickness accounted for 64 percent, followed by injuries at 14.9 percent. Inter-hospital patient transfers made up 8.4 percent of the total, while 7.9 percent were injured by traffic accidents.

But it has long been said the system is being abused, as some people call for emergency services for nonemergency situations.

A 2015 public opinion survey of 1,500 adults conducted by the Tokyo Fire Department showed some ambulance transports were not medically necessary. When asked why they called an ambulance, 28.8 percent of the respondents said they could not tell whether their condition was serious or not, and 19.6 percent noted they called for help late at night or on weekends when their neighborhood clinics were closed. What’s more troubling, 3.5 percent said they thought the ambulance ride would mean prompter treatment, and 3.2 percent said they had no other means of transportation, suggesting that the ambulance is seen as a free taxi to a hospital.

What is being done to stop the abuse?

Some municipalities ask people to call #7119 when they are unsure whether to call an ambulance. The number connects the caller to an operator who asks a series of questions to determine whether an ambulance is really necessary and who can give first aid tips. The service is currently available in four prefectures (Tokyo, Nara, Osaka and Fukuoka) and three cities (Sapporo, Yokohama and Tanabe, Wakayama Prefecture). Miyagi Prefecture, Saitama Prefecture and Kobe are planning to join later this year.

“We are trying to expand it further, dispatching officials from municipalities where #7119 have been introduced to other municipalities as advisers,” said FDMA official Kenichi Ogue.

“But certain conditions have to be met for municipal governments to introduce the number, such as securing enough manpower to run the 24-hour service every day, having a doctor on standby to offer medical advice when needed, and setting up a system to connect callers to 119 operators when necessary,” Ogue said.

In March, the FDMA also launched a smartphone app (in Japanese only) that provides the same kind of guidance. Called Q-suke (jtim.es/djPi30faItB ), it assesses the level of emergency according to symptoms and makes recommendations on whether to call 119 or other agencies, such as medical institutions that are open at night.

Despite the rollout of services meant to alleviate the overburdened emergency hotline, only 13 percent of 1,790 people in a poll were aware of #7119, while 1.7 percent knew about Q-suke, according to the findings of a Cabinet Office survey released Sept. 9.

What else can be done to stop the nonemergency use of ambulances?

Debate has raged over whether a user fee should be introduced. In 2015, a Finance Ministry panel recommended a charge for some ambulance services, citing the roughly ¥2 trillion the nation spends annually on fire and disaster management.

“If we keep the situation as is, we will see delays in responses to the sick and injured who face real emergencies, and could have problems saving their lives,” the panel said in its report on fiscal health. “We should consider making the service a paid one for patients with light symptoms, taking the practices of other countries into consideration.”

According to materials presented at a separate FDMA panel the same year, some cities overseas, including New York, Munich and Paris, charge ambulance users, either directly or through private or public insurance providers. Singapore charges fees for only nonpressing cases.

But the FDMA panel concluded in March 2016 that more discussions are needed before a decision can be made on whether to charge fees even for nonemergency cases. Many officials at fire stations oppose the idea, saying a fee would end up denying ambulance access to the poor. They also cited the difficulty of judging which cases were pressing.

“If we are to make certain services chargeable, we need to have a national consensus on many factors, such as who we should charge, whether a doctor’s opinion is necessary for that determination, how much we charge and how we collect the fees,” the panel concluded.

Some emergency-room doctors see things differently. According to a November 2016 article by the Nikkei Medical magazine, which polled 3,879 doctors, 46.7 percent of the respondents said all users should be charged for ambulance services and 39 percent said users should be charged if their cases are determined to be less serious upon arrival at the hospital. Only 13.4 percent replied that ambulances should remain free. An orthopedist commented to the magazine that some patients frequently call ambulances to take care of something as common as a cold. Another hospital doctor questioned why ambulance transport should remain free when ER services are not.

Can 119 operators handle calls in languages other than Japanese?

No. For now, both 119 and #7119 handle inquiries in Japanese only. But the FDMA has prepared a manual in English for when and how to use ambulance services: jtim.es/iBpX30faIva .