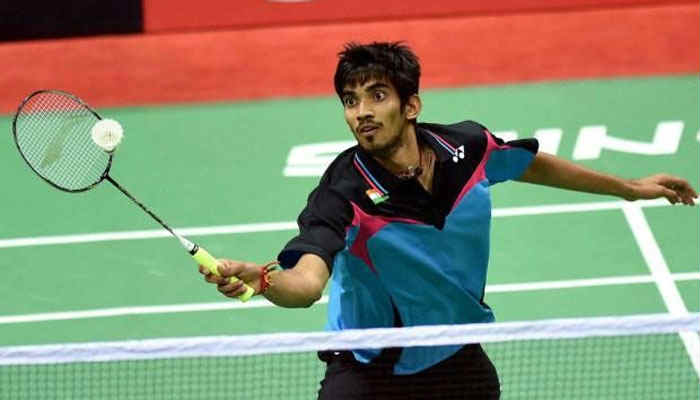 Kidambi Srikanth defeated Indonesia’s Anthony Sinisuka Ginting in the second semi-final of Singapore Open 2017. The Indian shuttler dominated his opponent to register 21-13, 21-14 win in a match which lasted 42 minutes.

Srikanth’s win means he will face his compatriot B Sai Praneeth in the final. Praneeth outclassed Lee Dong-keun of Korea, 21-6 21-8, in the first semi-final earlier in the day. This will be the first all-Indian Super Series final.

Just like, Praneeth, Srikanth outplayed his opponent in straight sets to progress to the final. However, Srikanth was trailing 4-9 in the opening game, but the Rio Olympic quarterfinalist made an excellent comeback and then continued his domination. Both the Indians will now be fighting for the title. While Praneeth will be playing in his maiden Super Series final, for Srikanth it will be third. Also Read- Sai Praneeth beats Lee Dong-keun to advance to final of Singapore Open 2017

Srikanth starts as a favourite to clinch the title, but it is Praneeth who leads the head to head record between the two. Praneeth has lost just once against Srikanth and emerged victorious four times. Also Read- PV Sindhu loses in straight games to Carolina Marin in Singapore Open quarterfinal

On Friday, in women’s single PV Sindhu faced dejection as she was knocked out of the tournament. The Olympic silver medalist suffered defeats in straight games against her Spanish rival Carolina Marin 11-21 15-21 in the quarterfinal.