The recent passing of Lee Kuan Yew all but ends the direct connection between the ‘old guard’ generation of leaders that brought Singapore to independence in 1965 and the Singaporeans of today. Unlike other old guard leaders who retired or otherwise departed public life in the 1970s and 1980s, Lee stayed in politics long enough to usher in the new century and remained a public figure at the time of his death. 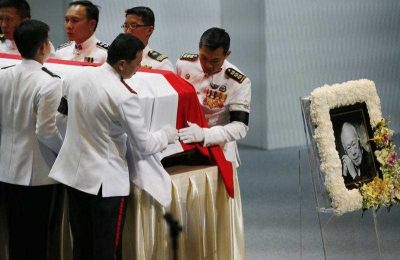 Yet long before he passed away Lee’s best days were behind him. His lack of discretion was leaving him open to a series of gaffes that were becoming increasingly embarrassing for his successors. It would be a shame if history were to judge him solely by this final phase of his life, but there is actually little chance of this happening. The more realistic danger is that his positive achievements will overwhelm the negative aspects of his legacy.

On the positive side, we need to be forthright in acknowledging his achievements. During the early decades of his government, Lee and his colleagues saved Singapore from a serious communist threat, overcame cataclysmic economic challenges, and forged a prosperous and peaceful multiracial society.

While Lee was no economic thinker, he was a natural strategist who rarely missed an opportunity. He and his colleagues were careful to take full advantage of Singapore’s position in the mouth of the Straits of Malacca, now the world’s main thoroughfare for sea transport and the second most important thoroughfare for oil. Lee took a direct and personal interest in developing the Port of Singapore, Changi Airport and Singapore Airlines. He also leapt on innovative ideas that were suggested by others, notably turning Singapore into a financial and oil-refining hub.

Lee’s government also pioneered the state capitalism that is now accepted as a significant model of economic development. Under his close watch, a mode of capitalism prone to gross abuse and corruption was turned into a new model of success. That this model was a major source of political and personal patronage — and that some of his relatives lost billions of dollars of public money without being held accountable — diminishes these achievements significantly, but it does not negate them.

There is little chance of this positive legacy being forgotten. But there is the risk that Lee’s admirable achievements will overshadow less admirable parts of his record. Perhaps his greatest legacy on the international stage is his successful integration of capitalism with authoritarianism. He showed the world — including powers like China — that a government that delivers prosperity and makes its country useful for international capital might buy latitude to take control of the media, lock up and torture its opponents, and ride roughshod over democracy.

Other negative policies he implemented were the heightening of racial consciousness and the institutionalisation of racism. This record was Lee’s personal achievement. The period prior to the 1980s, and before the departure of most of the other old guard leaders, is now looked back on as something of a ‘golden age’ of ethnic relations. But afterward, Lee elevated Chinese culture and ‘Chinese values’ to the centre of Singapore’s national identity, and introduced a series of institutional advantages for ethnic Chinese Singaporeans in education, as well as opportunities in the civil service and military. Ethnic identity was exaggerated through the creation of race-based self-help groups and other measures such as ethnic quotas in access to housing.

Yet despite the negatives, there is no doubt that — in terms of governance — Singapore is worse off for losing Lee Kuan Yew. Not the Lee who died on 23 March 2015, but the Lee of decades ago: the visionary who was ahead of the pack in identifying new opportunities (like the rise of China), the obsessive micromanager who saw projects through and the master politician who was able to bring the people with him and was mostly — but certainly not always — sensitive to sources of popular discontent.

In this sense, Singapore has been creeping step-by-step into a post-Lee era for a decade or more already. This makes problematic both his devotees’ fears and his critics’ hopes that his death will be a turning point in any substantive sense.

The problem for Singapore as a country is that Lee has bequeathed a system that needs another Lee Kuan Yew at the centre — but there is no one like that on the horizon. Nor is there likely to be. For all his attention to succession planning Lee has left Singapore in the hands of mediocrities who are proving themselves day-by-day and year-by-year to lack vision or even administrative and political competence.

The best case outcome is a more pluralistic political system with higher levels of accountability and democratic freedoms that leads to better government. But there is a risk that, having failed in their attempts to emulate Lee the politician and administrator, his successors might decide to imitate Lee the tough guy. That legacy would be truly tragic.

Michael D. Barr is an Associate Professor of International Relations at Flinders University.

Baogang pushes on with steel expansion