Life The 'golden boy' Schooling mobbed on return to Singapore

It was a photo taken with Michael Phelps that inspired Joseph Schooling to Olympic gold. So when he was mobbed by fans on his return to Singapore, he made sure he posed for a few.

Hundreds packed Singapore’s Changi Airport as the 21-year-old Schooling returned from Rio de Janeiro with an Olympic gold medal around his neck on Monday. He beat his idol in the 100-meter butterfly to deliver the first ever Olympic gold medal for the city-state of 5.54 million.

“Definitely the highlight of my life,” he told the crowd. “Thank you everyone for coming. This (gold) is not for me. This is for everyone. Thank you guys.”

Schooling, who attends the University of Texas, will spend four days celebrating in events in Singapore, including an open-top parade.

Sim Siew Png arrived at the airport seven hours early in the hopes of seeing his hero.

“I wanted to see the golden boy,” the 17-year-old Sim said as he clutched a pair of red swimming trunks that he hoped to get autographed. “Watching the moment live on television left me excited and happy. My family was screaming.”

Sim was recalling Saturday’s showdown in Rio where Schooling built a big lead and won in an Olympic record of 50.39 seconds. Phelps, the most decorated Olympian of all time, South Africa’s Chad le Chlos and Laszlo Cseh of Hungary shared a three-way tie for silver.

Schooling’s father, Colin, did not travel to Rio but said he’d dreamed of the Singapore anthem being sung in the Olympic stadium.

“I got a feeling that Michael gave him some words of praises. I’m glad my son also showed respect. That goes well with me,” he said. “Now we have to aim for the world record.”

Schooling spent more than an hour thanking his supporters Monday, signing autographs and posing for photos with fans as people screamed and chanted his name.

Schooling was just a 13-year-old kid in 2008 when Phelps showed up to train at his club in Singapore ahead of the Beijing Olympics.

While other kids rushed at Phelps wanting photos, Schooling was frozen. He couldn’t believe his swimming idol was in front of him. Eventually, he mustered the courage to ask for a picture, too.

“A lot of this is because of Michael,” Schooling said after his victory. “He’s the reason why I want to be a better swimmer.”

“I came to support him because he’s friendly, approachable and very nice to little children,” Judy Eng said, recounting how her nine-year-old son was on the receiving end of one such swimming pep talk.

Not only is Schooling a good role model, he’s also a little wealthier now too.

By winning his country’s first Olympic gold, Schooling earned a bonus of $1 million Singapore dollars or nearly US$750,000. 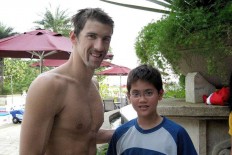 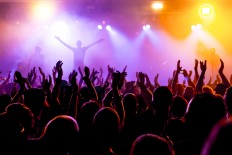 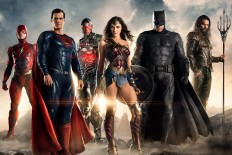