In recent years, growing global oil production and growth in global refining capacity in markets distant from crude sources led to an increase in orders for new vessels in anticipation of an increasing need for tanker transportation. This resulted in several consecutive years of an expanding global tanker fleet, with an estimated net change of 205 ships added in 2015, according to Thomson Reuters.

Source: U.S. Energy Information Administration, based on Bloomberg and London Tanker Brokers’ Panel
Note: Deadweight tons (DWT) is a measure of a vessel’s capacity to carry cargo. Barrel equivalents will vary based on the cargo’s density. AFRAMAX is not an official vessel classification on the AFRA scale.

On a global scale, demand for tankers is influenced by differences in supply and demand conditions across regional markets. Tankers of different sizes and classes have specific characteristics that help determine the markets and shipping routes they serve. For example, so-called dirty tankers, which transport unrefined or less-refined cargos (such as crude oil and residual fuel oil), tend to be large, with low per-barrel transportation costs. So-called clean tankers, which transport refined products such as gasoline and diesel fuel, are typically smaller vessels. 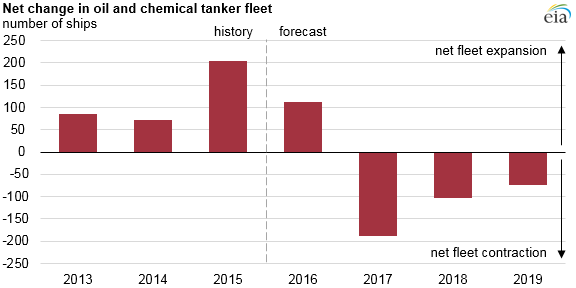 With lower tanker rates, the price spread needed for economically attractive trade between two markets narrows, making it possible for importers to bring in distant supplies at reduced cost. For exporters, lower tanker rates increase the price competiveness of their supplies in more distant markets. This can help to explain some of the motor gasoline imports to the U.S. East Coast in 2016 from relatively distant countries such as South Korea, Malaysia, Taiwan, and Japan.

However, with lower tanker rates, exporters may be able to load smaller ships at U.S. ports and transfer the cargoes onto larger vessels offshore for transport to final destinations at an attractive per-barrel cost. This may explain U.S. Customs data showing some crude oil exports to places like the Marshall Islands, a nation where many vessels are registered but are most likely not taking deliveries.

Going forward, tanker rates should recover as the global market slowly returns to balance. EIA’s most recent Short-Term Energy Outlook (STEO) forecasts a global quarterly draw in crude oil stocks in the third quarter of 2017, the first since 2013.