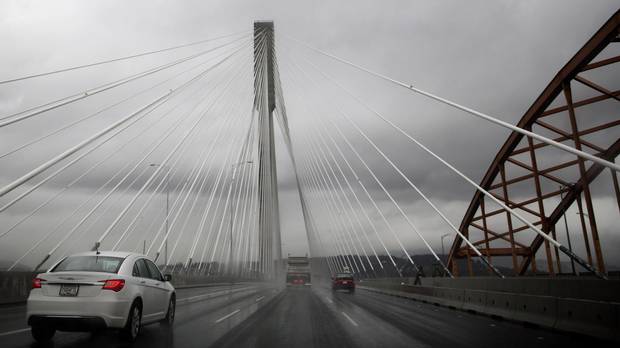 You can tell an election is looming when political parties announce lowering fees. The two main contenders for the May 9 election in British Columbia – the BC Liberals and the NDP – have been trying to outdo each other in the transportation department. The BC Liberals are promising to cap tolls on the Port Mann and Golden Ears bridges at $500 per year, while the NDP is going a step further, promising to eliminate bridge tolls altogether.

Tolls are currently $3.15 per trip for cars with a transponder, and $2.30 more for vehicles without. So commuters who have no alternative to using a tolled bridge will each pay at least $1,512 in annual tolls over the course of 240 working days.

The promises made by both parties are sure to be popular with voters, especially in some hotly contested ridings in Metro Vancouver. But unfortunately, even though the Liberals and NDP have a valid point, they fail to see the bigger picture. When used wisely, bridge and road tolls can be a useful instrument to fine-tune traffic flow, relieve congestion, and optimize transportation choices on a city-wide scale. Mobility pricing works best when commuters have alternatives: meaning, which route to take, or whether to take the car or the train.

In the Lower Mainland, mobility pricing needs to be applied in a consistent manner that takes into account all traffic flows and transportation alternatives. It’s possible to make mobility pricing revenue-neutral by taxing congested routes and subsidizing more efficient choices, including public transit and more fuel-efficient or electric vehicles. Toll revenue could even be returned through lower Insurance Corporation of British Columbia premiums. Effective mobility pricing does not need to amount to a cash grab for the government.

The current system in the Lower Mainland, where only two bridges are tolled in order to recover construction costs, is flawed. Why are only these bridges tolled (at a total cost of $4.1-billion) when the newly constructed South Fraser Perimeter Road ($1.26-billion) isn’t? Cost-recovery tolling can make economic sense when the alternative is no bridge at all. But, when bridge tolling is applied to some but not all bridges, traffic is diverted from tolled to untolled bridges. The result is more congestion in these places.

The toll cap proposed by the BC Liberals addresses the affordability problem, but not the traffic-management problem. The cap will do nothing to relieve overall congestion, but will simply shift it. The NDP’s proposal to drop tolls altogether sounds more attractive – not only because it’s free for commuters, but because abandoning tolls would end the haphazard way that tolling is used.

But there’s a problem with free, since free things tend to get overused. Driving isn’t free, of course; we pay fuel and carbon taxes, which help reduce pollution and encourage the use of public transit. However, it doesn’t help optimize traffic flows or reduce congestion where it’s needed most.

Every time we drive a car, we impose a cost on other drivers by slowing down traffic. We all try to take the quickest route, and when everyone does the same, some routes end up with considerable congestion. Distributing traffic would be better, but that means it would take longer for some people to get to their destinations. Differential tolls on major bottlenecks relieve congestion by letting drivers trade off a higher price for a faster trip.

In dense urban cores, cordon (or ring) tolls can also limit traffic and get people to rely more on public transit. The traffic that remains then moves much faster. London, Stockholm, Milan and Singapore all have introduced fees for entering the city core. Toronto’s city council approved road tolls for the Gardiner Expressway and the Don Valley Parkway, but Ontario Premier Kathleen Wynne stopped this proposal, worried about her electoral prospects in 2018.

Tolling is never popular. Neither are taxes. But without mobility pricing, traffic will get worse with population growth. The 2016 TomTom Traffic Index shows that Vancouver is Canada’s most congested city. On average, congestion adds 39 per cent extra travel time, and 72 per cent during evening peaks. This amounts to an average 38 minutes extra travel time per day. Smart road pricing, adjusted by time of day, location, and available alternatives, will bring some relief.

The financial relief promised by both the BC Liberals and NDP is short-term gain for long-term pain. When you’re next stuck in traffic, you know whom to blame.