Luxury goods including £3,000 watches and premium whisky are on sale in department stores in North Korea amid claims the proceeds are funding Kim Jong-un‘s nuclear weapons.

Photos show upmarket jewelry, perfume brands and clothing are all available in two high-end shops in the country’s capital, Pyongyang.

One North Korean defector, who once helped to finance the import of illicit goods into the hermit state, said the sales could be going towards the nation’s military program.

This story was uncovered by NK Pro analysts during a year long investigation into sanctions violations. 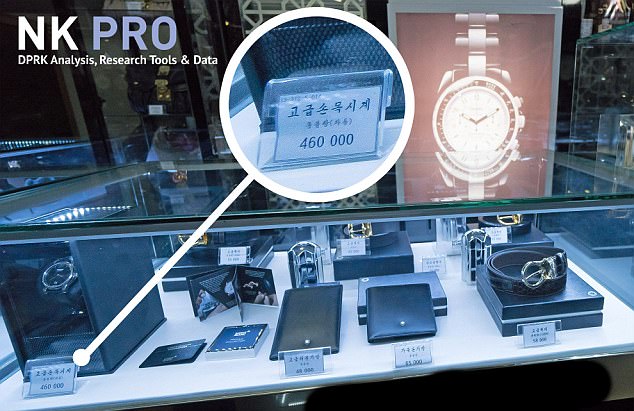 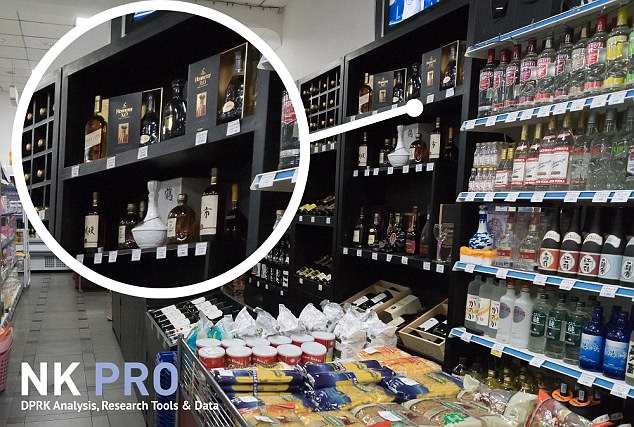 Expensive watches, perfume, designer clothes and top-shelf alcohol at prices up to £3,000 were all pictured lining the walls of two luxury shops 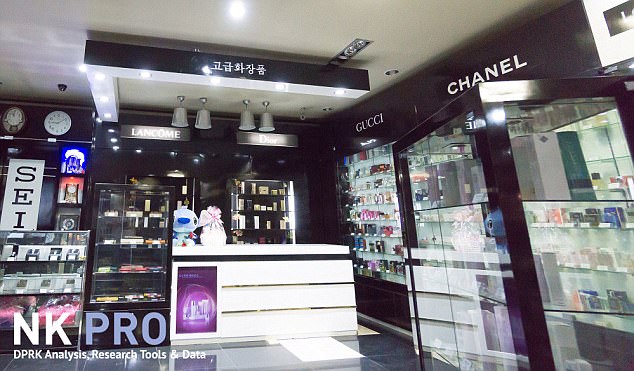 Kim Kwang Jin, a North Korean defector who used to smuggle luxury good for the regime, said it is likely that Kim Jong-un is using profits from these goods to fund his nuclear weapons 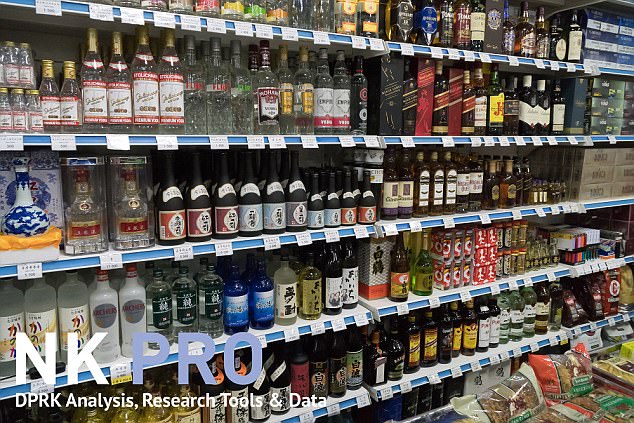 Since coming to power Kim has been known to exploit unofficial private markets in North Korea, imposing loyalty tariffs to profit from the trade, which is still technically illegal

The images show glass cabinets filled with luxury items as well as wall plug adapters so that the foreign televisions and laptops they buy will work in their homes.

According to researchers, the outlets are called the Puksae Shop and Pottongang Ryugyong Shop and are kept away from the usual tourist hotspots.

They include cabinets dedicated to the German luxury brand Montblanc with one of the firm’s watches on sale for 460,000 Won – roughly £3,000.

In a statement, Richemont, which owns the Montblanc brand, said it does not trade in North Korea or in countries that are subject to sanctions.

It told CNN: ‘The imports you are referring to could be linked to unauthorized channel activities and/or involve counterfeited and/or second-hand products,’ it said in a statement.’ 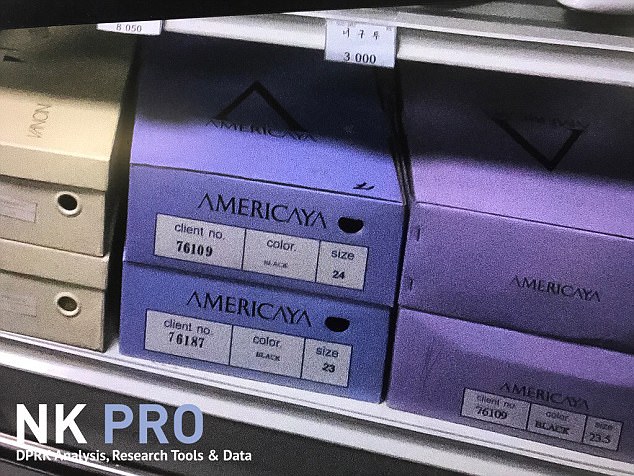 Americaya, a luxury shoe brand based out of Singapore, was also for sale. Researchers claim the goods they found in North Korea are linked to traders in the island nation 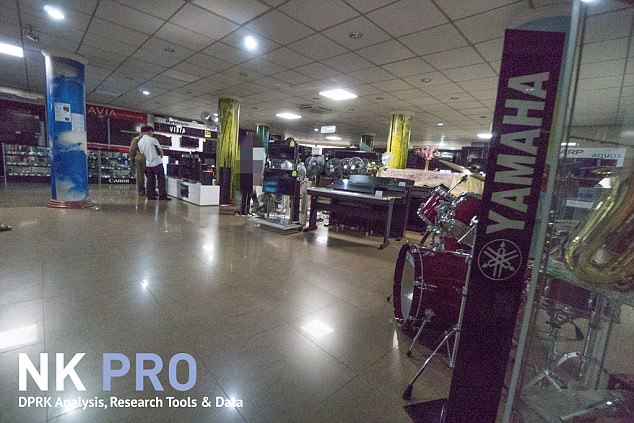 Premium electronics brands such as Sony, Panasonic, Yamaha and Seiko were also found on sale. There is no indication any of these brands sold directly into the country, and their products were likely ferried there through dealers based in Singapore 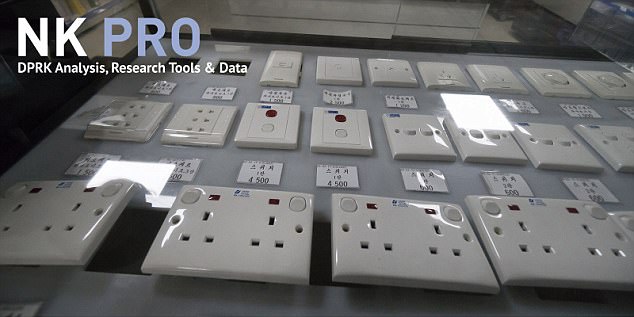 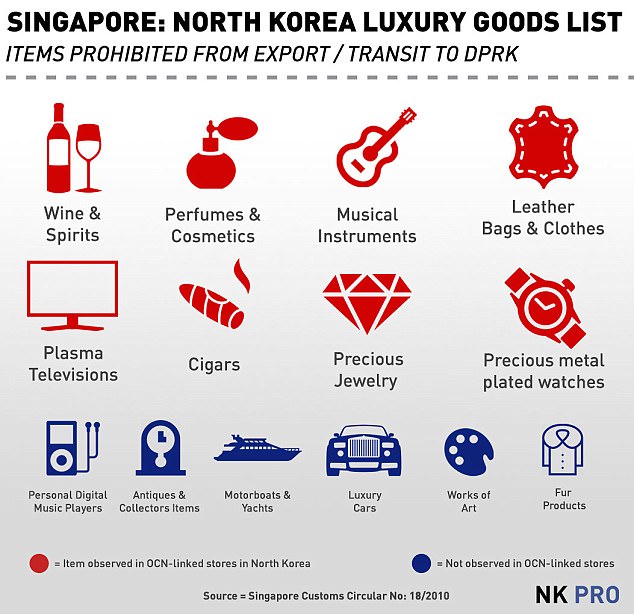 Of 14 categories of luxury goods banned from importation into North Korea, items fitting into eight of them were found on sale in the country

The luxury items are available to North Korea’s wealthy elite, despite the UN saying two million of the country’s citizens are struggling to survive on hand-outs from the state. It says the daily allowance is 650 grams of maize, rice and meat.

Kim Kwang Jin, who defected from North Korea having once helped to bankroll illicit imports into the country, suggested Pyongyang makes large amounts of money with its sale of luxury goods.

He told CNN:  ‘They earn a lot of dollars and cash from these luxurious department stores by selling all these goods and they re-allocate these dollars into their priorities like the nuclear and missile program.

One western diplomat said only US currency could be used in the shops, CNN reported. Some would used dollar notes for items costing more than $2,000, the diplomat said.

The NK Pro website claims its investigation shows a link between the luxury shops in North Korea and traders based in Singapore. 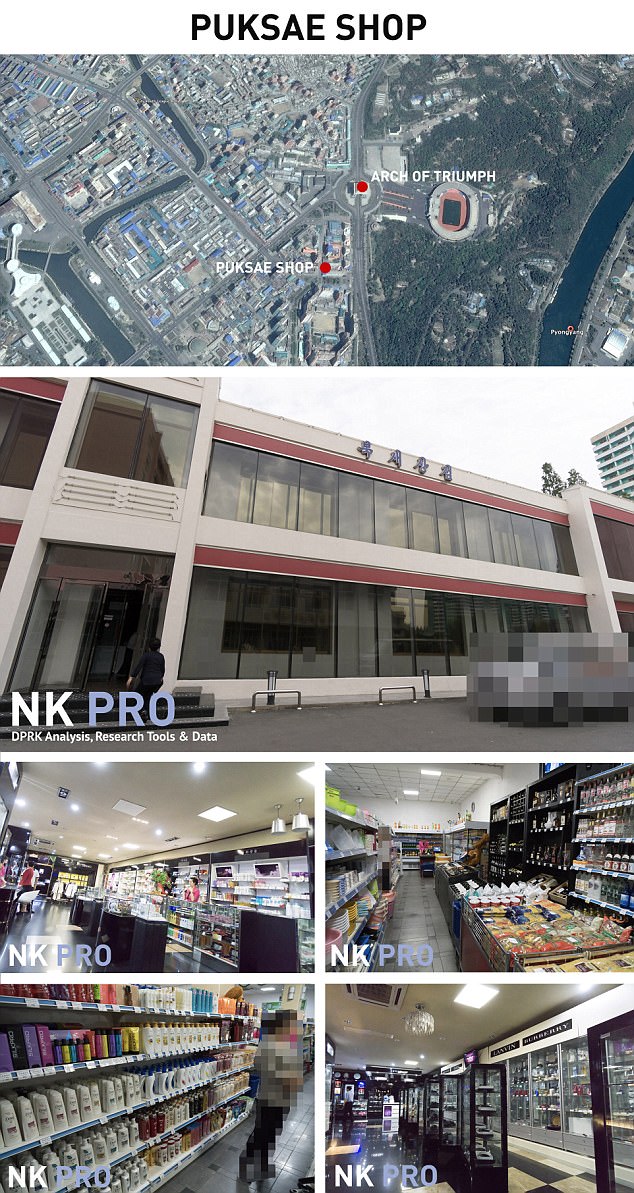 The goods were found on sale at two shops which are kept well away from tourist areas of the capital, including Puksae, near the Arc of Triumph, in the north of the city

The Pothonggang Ryugyong shop was seen selling some of the most expensive items up for sale, including a Mont Blanc watch for £3,000

Many items, it says are banned under trade sanctions imposed on North Korea.

Last year, pictures of ski resorts flooded with luxurious international exports in North Korea raised new questions on how effective sanctions are on the rogue state.

Photos of people on French skis and Chinese snow mobiles in March 2016, emerged just weeks after the world imposed its toughest sanctions yet on the state as it refused to halt its nuclear weapons programme.

The UN has been trying for years to deter North Korea’s nuclear programme by barring trade not only in weapons but in luxury items, in hopes of making Pyongyang’s elite feel some pain.

In April, figures seen by MailOnline showed how Kim Jong-un imported a total of $1million (£800,000) worth of alcohol in 2016 and appeared to have a penchant for spirits.

North Korea raised tensions with the US and its allies earlier this month with a test launch of an intercontinental ballistic missile that its defence officials said marked the ‘final step’ in creating a ‘confident and powerful nuclear state that can strike anywhere on earth’.