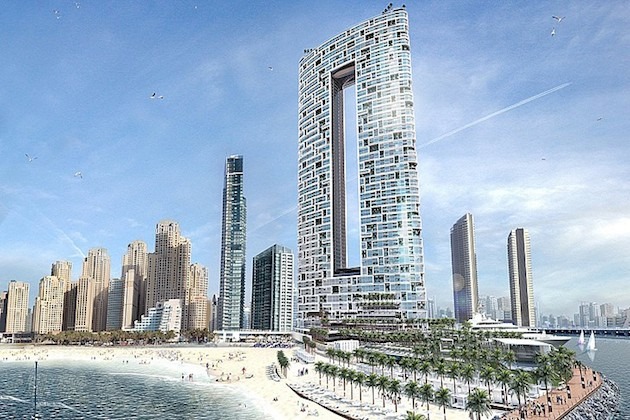 DUBAI, UAE – A massive new hotel and resort will be developed by Emaar, Dubai’s biggest and most successful property developer on the emirate’s famed Jumeirah Beach.

The resort and associated residences, comprised in a co-joined twin tower complex with a brige joining the towers at the top, will stretch 290 metres into the sky and will be built alongside 100 meters of beach, opposite Bluewaters Island, a man-made island under construction which will house the world’s largest ferris wheel, Dubai Eye.

The new offering which will include a large resort hotel, a large number of serviced apartments, and a large number of residential apartments will have a rooftop infinity pool similar to that built at the Marina Bay Sands Hotel and Casino in Singapore. To be operated by Emaar’s hospitality wing which manages The Address Hotel chain, the new Jumeirah Beach resort will be branded, The Address Jumeirah Resort and Spa.

The hotel is one of a string of new hotel developments under construction on the Jumeirah Beach foreshore, the largest of which is the 55-storey Corinthia Hotel and Resort being built by Meraas Holding, between the Ritz Carlton and Hilton Hotels on Jumeirah Beach, in front of the JBR Sadif 4 and Sadif 5 towers and the Moevenpick Hotel.

The Emaar move is surprising as the Dubai hotel market is fast approaching an oversupply which is already impacting on the emirate’s occupancy and room rates. Some developers have walked away from projects, even though the buildings have been almost completed. The nearby Emaar hotel, The Address Dubai Marina recently recorded an occupancy in June of just 28%. Its room rate in July was AED 323.54 ($88 USD). In recent weeks the Sheraton, Le Meridien, Ocean View and Hilton Hotels at Jumeirah Beach have all been offering rates at less than $100 USD a night. With several new hotels being built, and more than a dozen new resorts being constructed at nearby Palm Jumeirah the oversupply is likely to be exacerbated in the next few years. Emaar have not given a completion date for the new resort however it is already running considerably behind on its anticipated completion date for other hotels. The Address Boulevarde was expected to be finished by May but is still under construction. Emaar is not alone. Most developers have been dragging out completions as the real estate market in the emirate has sagged over the past two years. Developers have been egging investors on with subsidised or forfetited transfer fees, and payment plans which allow for large proportions of payments to be made post-completion. Much of the payment however for off-plan properties, up to 50 to 70% is required up front over a number of timelines, rather than being indexed to completion milestones, which had become mandatory after the property collapse in 2009, but appears not to be being enforced.

Many developers have partitioned the new hotels under construction and have been selling hotel rooms off-plan. In all cases so far, to ensure sales, developers have had to offer guaranteed returns. The Dukes Hotel at Oceana on the Palm is offering a guaranteed 10% return over the first five years. The hotel, which has been under construction for several years was to be completed by May this year. However the completion is still far from being completed, and will certainly not be completed this year.

The Kempinski Palace Hotel on the Palm, adjacent to the already operating Kempinski Hotel has also been under construction for some years. Investors are being told it will be completed this year, but short of a miracle that will not happen.

The construction of the Seaview Hotel near the Zabeel Saray Hotel is almost complete however the site has been abandoned for well over a year. The Taj Exotica Hotel next to Grandeur Residence which adjoins the Zabeel Saray hotel is another abandoneed construction site, notwithstanding the hotel is partially built. Work stopped on it four years ago. A recent report said the project was being revitalised with Arenco Group having taken on the project. A request for information from Taj Hotels however has not been responded to.

The massive Kingdom of Sheba Hotel and Residences development at the top of the Palm is also an abandoned construction site, notwithstanding the buildings were almost completed more than two years ago.

The new Viceroy resort hotel on the Palm, being built and funded by Chinese builders is one development that will likely finish on time, if not ahead of schedule.