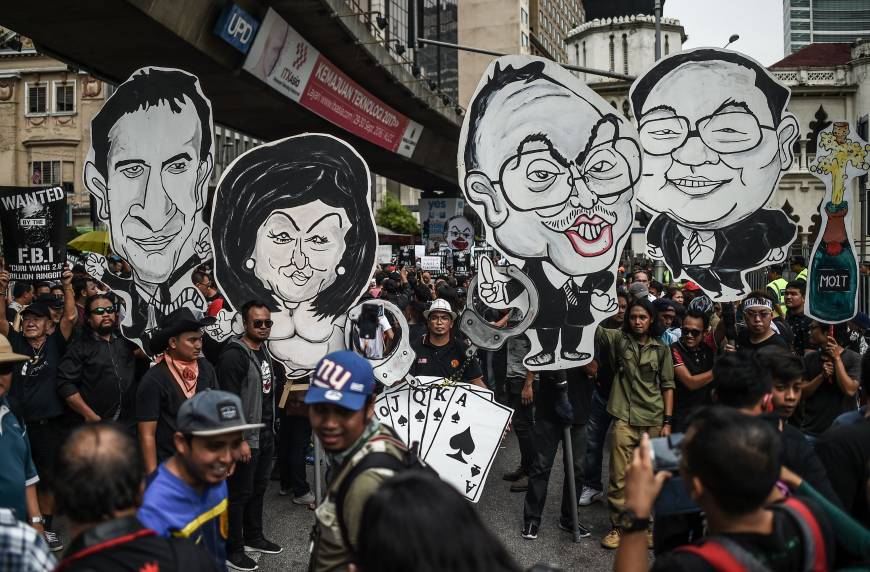 KUALA LUMPUR – Malaysian student activists led a rally Saturday to demand the arrest of Prime Minister Najib Razak, who has been implicated in a U.S. government probe into massive fraud in a Malaysian investment fund.

More than 1,000 people defied a police ban as they congregated at two locations in Kuala Lumpur and marched to historic Independence Square. They held posters and caricatures of Najib, with some chanting “Catch, catch Najib.”

The U.S. Department of Justice said last month that at least $3.5 billion had been stolen from 1MDB, a Malaysian fund founded by Najib. It has initiated action to seize $1.3 billion it said was used to buy assets in the U.S.

It said in court filings that more than $700 million had landed in the accounts of “Malaysian Official 1.” It didn’t name the official, but appeared to be referring to Najib. Allegations against 1MDB have gained steam, but Najib has steadfastly denied any involvement or wrongdoing.

“Can we send MO1 to jail and bring that person to face justice?” student leader Anis Syafiqah Mohamad Yusof said at the rally.

Police put barricades around the square, forcing protesters to gather around the perimeter. It was a rare protest led by student activists in the country, and backed by opposition parties and civil groups.

The rally ended peacefully after nearly three hours, with student leaders placing the effigies of Najib, his wife, Rosmah Mansor, his stepson Riza Shahriz Abdul Aziz and businessman Low Taek Jho into a mock prison. Riza, who co-founded the movie production studio Red Granite Pictures, and Low, who is close to Najib’s family, were named in the Department of Justice filings.

The state fund was created in 2009 by Najib shortly after he took office to promote economic development projects. Instead, U.S. prosecutors said, fund officials diverted more than $3.5 billion through a web of shell companies and bank accounts in Singapore, Switzerland, Luxembourg and the United States.

The Justice Department says the forfeiture demand, for some $1.3 billion of that money that officials were able to trace through the U.S. financial system, is the largest single action it’s taken.

The money was used to pay for luxury properties in New York and California, a $35 million jet, and art by Vincent Van Gogh and Claude Monet, according to the DOJ complaints. It also allegedly helped finance the Hollywood film “The Wolf of Wall Street,” made by Red Granite Pictures.

Najib remains firmly in political control of the country, thanks largely to the apparently unwavering support of ruling party members despite a few voices of dissent. The opposition is too weak in Malaysia to dislodge him. However, the U.S. complaints are by far the biggest threat to Najib’s credibility that could reinvigorate the opposition.

The attorney general has defended Najib, saying he has not been named a defendant in the DOJ complaints. He had already cleared Najib of criminal wrongdoing in January, saying $681 million found in his bank accounts was a donation from the Saudi royal family and not from 1MDB, with most of it returned.