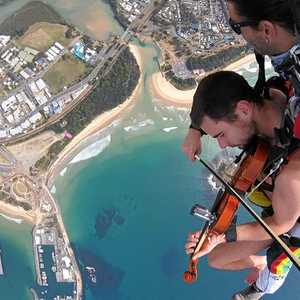 A MAN’S gutsy stunt, which played out on the Coffs Coast over the weekend, is drawing global attention.

On his 30th birthday on August 27, Central Coast man Glen Donnelly teamed up with Coffs Skydivers to take the ultimate plunge, falling 15,000 feet while completely naked and playing the violin.

The dive was all part of a fundraiser, as Glen is aiming to raise $15,000 to support men’s mental health, particularly around negative body image – something which has affected him for years.

“It’s not about exhibitionism and it isn’t about being sexual, it never was and never will be,” Glen said.

“People have anxieties and grapple with shame, and as someone who has grown up surrounded with judgment I know it can be so stubborn that you need to do something radical to heal.”

Glen put the call out on his outrageous idea to various skydiving companies, and Coffs City Skydivers were happy to jump on board.

Germain Sieurin, who hails from France, took the leap with Glen while Chief Instructor Lawrence Hills photographed the stunt.

“His values and what he wanted to do really falls in line with the way we see the world,” Chief instructor Lawrence Hills said.

“For us skydivers it’s always wonderful when someone comes in with a crazy idea, it’s a lot of fun.”

Glen’s skydive has made national news, and he has even been approached by news outlets in Singapore.

To donate to the cause, visit https://www.gofundme.com/BirthdayDive.