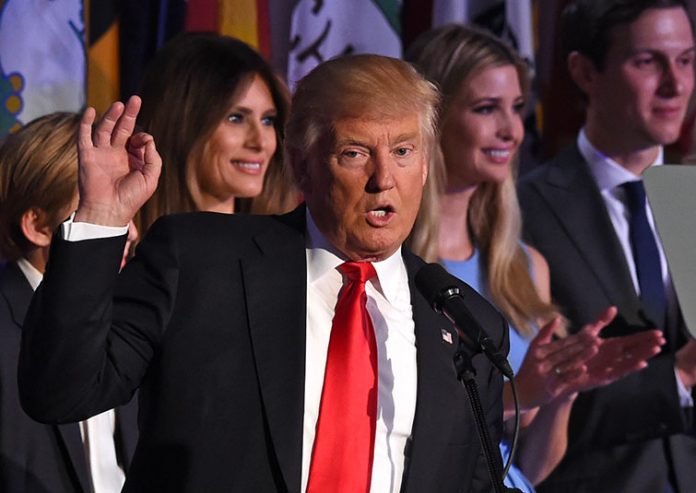 Republican presidential candidate Donald Trump flanked by members of his family speaks to supporters during election night at the New York Hilton Midtown in New York on November 9, 2016. Trump won the US presidency. / AFP PHOTO / Timothy A. CLARY

Share markets plunged Wednesday and the dollar tumbled against the yen and the euro as Donald Trump was elected US president, in a stunning upset with major implications for the world economy.

After he won a swathe of states, Clinton called Trump to concede, handing him the keys to the White House.

Markets have been plunged into turmoil as Clinton was considered by many investors to be a safer bet than Trump, who is seen as a loose cannon with policies many fear could wreck the world’s number-one economy.

“It’s been a bloodbath in the markets over the last few hours with the Mexican peso suffering particularly,” said Craig Erlam, senior market analyst at OANDA.

Tokyo had collapsed 5.4 percent by the end of trade, while Hong fell 2.2 percent and Shanghai sank 0.6 percent.

The Sensex on the Bombay Stock Exchange was three percent off, having initially plummeted more than six percent on Trump’s performance and news that high-denomination notes were being pulled from circulation as part of a crackdown on tax evasion.

Futures on the S&P 500 and Nasdaq on Wall Street dived more than five percent at one point while those on the Dow were off four percent.

The Mexican peso — which was battered by Trump’s anti-immigrant rhetoric earlier in the campaign — hit a record low against the dollar.

The greenback soared to 20.7128 pesos, around its highest-ever point and about 12 percent up on earlier levels, before paring back slightly.

Trump’s anti-Mexican promises have included a pledge to remove undocumented immigrants, build a border wall and tear up a trade deal.

The dollar tumbled against the yen as investors rushed into the Japanese unit, which is considered a safe bet in times of uncertainty. The greenback sank to 101.30 yen from above 105 Tuesday before edging back up to 103.00 yen.

Later it emerged Seoul’s financial regulatory body would hold an emergency meeting with executives at major local banks to monitor the impact of the result. The South Korean won was down 1.3 percent.

The euro also rose 2.1 percent against the dollar, while gold soared 5.4 percent at one point — its biggest rally since Britain’s June vote to leave the EU, which also jolted markets.

High-yielding currencies in Asia-Pacific were battered against the dollar, with Australia’s dollar 0.9 percent off, Indonesia’s rupiah down 0.8 percent and the Malaysian ringgit 0.4 percent lower.

Oil prices plunged, with both main contracts more than two percent down.